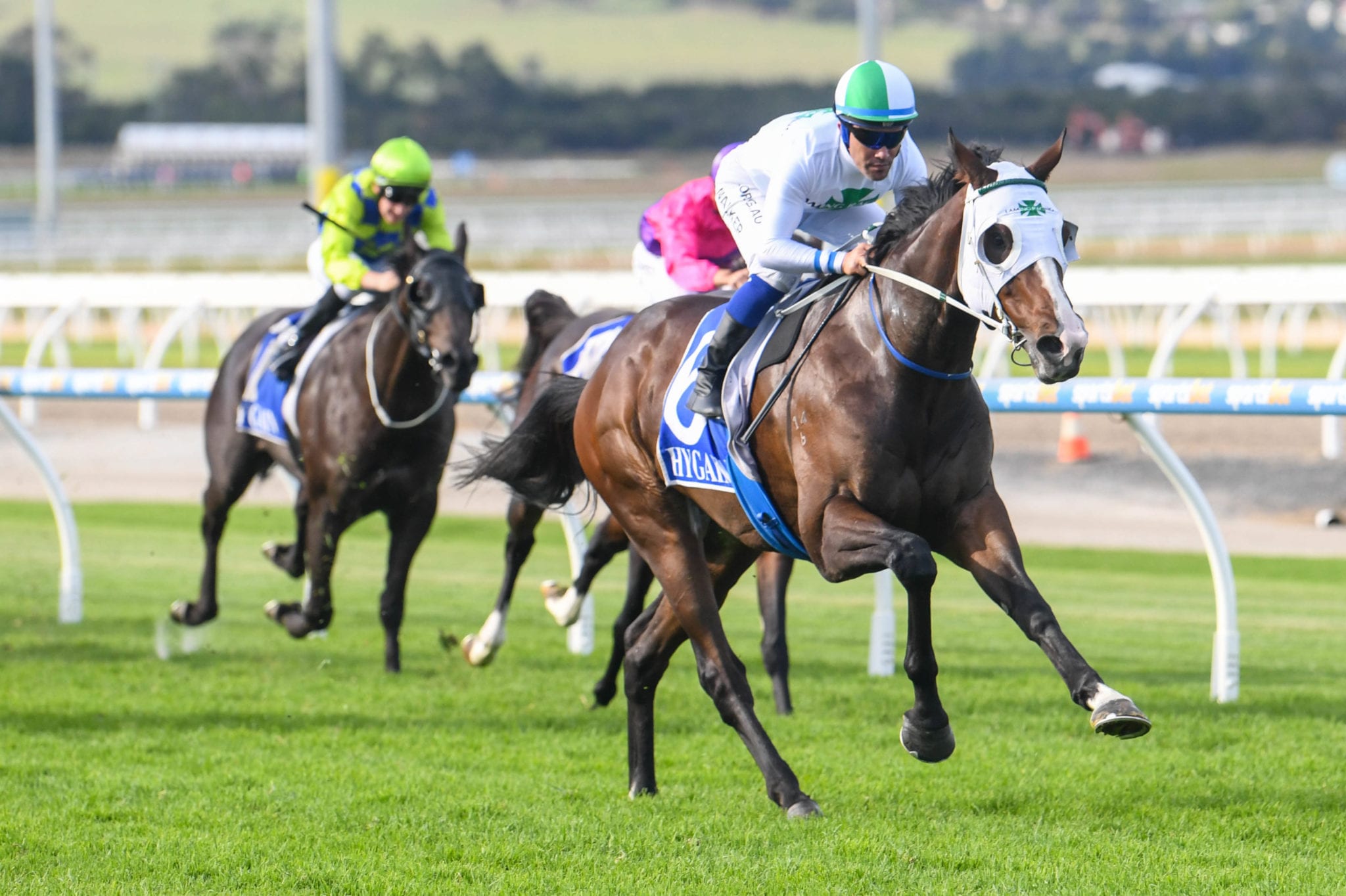 New Zealand Bloodstock Ready to Run Sale graduate Master Montaro could not have made a more impressive debut when successful at Pakenham on Friday night for Cranbourne trainer Richard Laming. Ridden by Michael Walker, the son of Toronado came from last to amble past his rivals when winning the Kentucky Equine Research Maiden Plate (1000m) on debut and looks to have a bright future.

The three-year-old gelding is part-owned by a group of Kiwis, which includes Woburn Farm principals Adrian Stanley and Hannah Kettlety, who retained a small share in the horse after selling him at the 2018 Ready to Run Sale for $300,000.

The strapping galloper stepped a stride slowly from the barriers which was not unexpected, according to Stanley, who had watched the youngster work at the beginning of the month when in Melbourne. “I was expecting that as he has been tardy away in his jump-outs and his trial at Cranbourne, where he ran a nice second,” Stanley said. “Richard decided that rather than going for another trial we would go to the races and treat it like a trial. “1000m is well short of where he will show his best. He is a big striding horse, but still powerful. I knew he could do that, but I wasn’t expecting it and I didn’t have a bet.”

Stanley said Laming was now looking at options, although it is hard to plan too far ahead given the current Covid-19 environment. “We kept a share in him because we thought he had a lot of ability. We didn’t really want to sell him, but we had to. “They have taken their time with him and everyone has been happy with the patient approach which has helped him mentally and physically.”

Stanley explained that he and his partner Kettlety were keen to up the ante in terms of selling Ready To Run Sale horses and Master Montaro was one of two they purpose-bought themselves for that sale. “That year we bought two horses from the Melbourne Yearling Sale,” he said. “We normally just bought weanlings, but we thought we’d have a go at the Ready To Run market. “We thought we’d have to pay $150,000 for Master Montaro as a yearling, but we got him for $80,000 which was a nice surprise. “The other horse we bought was by Kuroshio and he is called Lincoln Kruz and has won two trials for Lisa Latta and she has a massive opinion of him.”

Stanley praised breaker, pre-trainer and fellow two-year-old consignor Sam Beatson for breaking in Master Montaro, while also recognising the work of Shaun Phelan and Emily Farr who handled the fast-work as the youngster worked towards breeze up day. “Hannah did most of the educational work on him, while Shaun Phelan and Emily Farr also did a great job doing fast work,” he said. They gave him three gallops prior to the breeze up and the rest of the work was done around the farm, pretty much.

“We weren’t really expecting him to make his breeze up mate look a bit average, which wasn’t ideal, but he did it all naturally and did it on his own ability and wasn’t pushed. “We decided to target the Ready to Run Sale, as it is another form of income for the farm. “We will be doing another draft this year, no matter what happens in the future. We are looking to build another barn to accommodate those horses and keep them separate from our yearlings. “It is a great sale and top line horses continue to come out of the sale and it works for ourselves as pinhookers as well as our clients.”

Stanley said the horse had plenty of interest for family and friends with his father Noel and Uncle Ron also involved in the ownership. “They got involved because the horse was originally catalogued as a colt rather than a gelding but we disclosed to everyone he had been gelded,” Stanley said. “When Richard got him to Australia, one of his clients who had committed, didn’t realise and wasn’t keen on racing a gelding so we helped him out and Dad and my Uncle took a share in the horse and we raised our percentage in the horse, plus Dad’s good friend John Heale is also in him.”

Stanley, originally from Taranaki, said it had been nice that Michael Walker could ride the horse given his association with the Stanleys over the years, dating back to partnering multiple Group 1 winner Grout when riding for Allan Sharrock. Offers from Hong Kong have already been fielded, but Stanley said the offer would have to be decent to part with the special horse.

Meanwhile, Stanley has a yearling half-brother to Group 1 winner Te Akau Shark by Redwood he was set to offer at next week’s Sydney Easter Sale on behalf of breeder Darrell Hollinshead, however he is likely to withdraw him from the now online sale. “We will look at potentially selling him privately or he might be another that is offered in a Ready To Run draft, like his half-brother,” Stanley said, referring to Te Akau Shark, who was a $230,000 purchase by David Ellis from the Lyndhurst Farm draft at the 2016 New Zealand Bloodstock Ready To Run Sale.