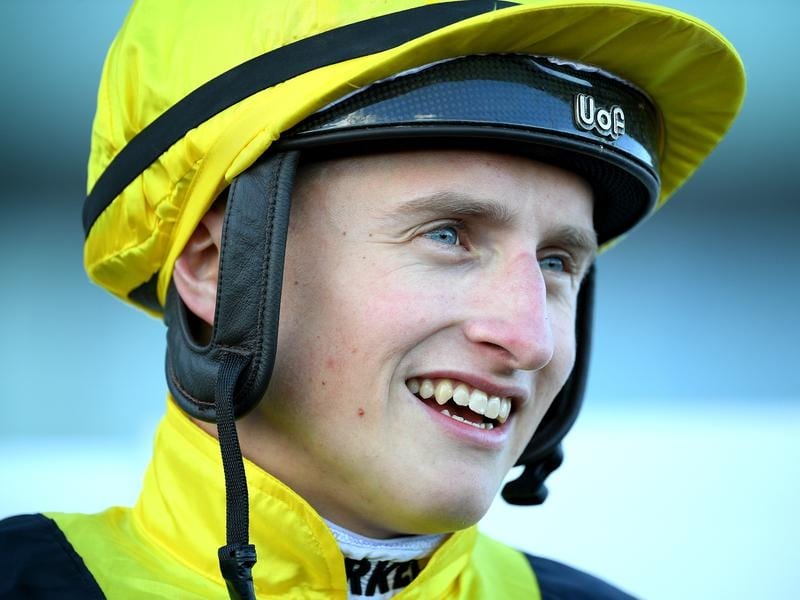 Team Snowden is preparing to take the shackles off its leading Golden Slipper candidate with Captivant to launch his autumn in the Skyline Stakes at Randwick.

Visiting Englishman Tom Marquand, who will emerge from quarantine early this week, has been snapped up for the ride.

Co-trainer Peter Snowden said the stable was keen to get a jockey who could commit to Captivant for the duration of his autumn campaign.

Marquand has a record of success in Australia where he captured his first Group One win aboard Addeybb in last year’s Queen Elizabeth Stakes.

“There are plenty of riders here but they are all committed to different stables and different horses,” Snowden said.

“He’s a nice horse so you like to have a nice rider on board.”

By exciting first season sire Capitalist, who Snowden trained to win the 2016 Golden Slipper, Captivant came from behind to claim the Victory Vein Stakes on debut in October.

He was again hitting the line strongly to finish on the heels of the placegetters in the Golden Gift won by Sneaky Five.

The Snowdens put him on ice with a view to targeting the major two-year-old races and regard him as their pre-eminent chance for the juvenile showpiece.

“At this stage he is but we will know a bit more about all of them in the next few weeks,” Snowden said.

There were 14 nominations for the Skyline Stakes on Monday, including Magic Millions winner Shaquero and his Chris Waller-trained stablemate Head Of State, who rises to stakes company after an impressive midweek victory.

Victorian Forbes is slated to make a belated local debut for the Blue Diamond Stakes-winning partnership of Anthony and Sam Freedman after finally being granted his barrier trial ticket at his third attempt.

Forbes was twice scheduled to have a trial in Sydney but was scratched at the gates both times before taking out an 800 metre heat at Goulburn on Sunday by almost 10 lengths.

There are 18 entries for the Sweet Embrace Stakes, which is set to feature a clash between two of Sydney’s top juvenile fillies in Four Moves Ahead and Mallory.