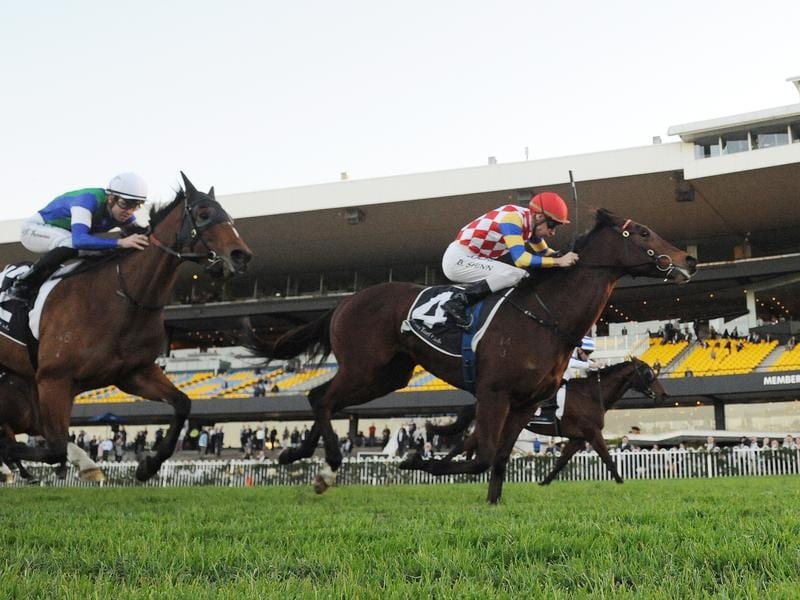 After two encouraging runs this summer, talented gelding Manolo Blahniq is poised for his latest crack at a first Australian stakes win in the Listed Chester Manifold Stakes at Flemington.

The Tony Noonan-trained five-year-old hit the line strongly for third in a 1000m-benchmark race at Pakenham first-up last month before chasing home quality colt Native Soldier when second in the Listed Christmas Stakes (1200m) at Caulfield.

On the back of those performances, Manolo Blahniq steps up to 1400m on Saturday and is the early favourite for the Chester Manifold at $4.

Dwayne Dunn rode Manolo Blahniq in the Christmas Stakes and has been riding him in trackwork ahead of Saturday.

“I rode him in work on Wednesday morning at Mornington and he’s going really well,” Dunn said.

“He’s drawn a little bit sticky in barrier 12 and he’s out of the handicap a little bit but he’s going along well.

“The 1400 will suit him and his work was really good so he should run well.

“He’s probably got a little bit more fitness to come after this race but he should be nearly ready to peak.”

Manolo Blahniq began his racing career in New Zealand and won a Group Three race at his second start as a juvenile before being unplaced as favourite in the 2016 Karaka Million.

He has raced a number of times in stakes company in Australia since his three-year-old season without a win but has netted two city victories in the past year, one at Caulfield last February and another at Rosehill in June.

“He gives me the feel that he’s definitely a Listed class horse,” Dunn said.

“Tony has got him going as good as he can and he should be ready to peak this run or the one after.”

Manolo Blahniq is shading last-start Flemington winner Mr Money Bags ($5) for favouritism while the Gai Waterhouse and Adrian Bott-trained Cabeza De Vaca is on the third line of betting at $7.

Cabeza De Vaca is having his first run since September and finished fifth in the Group One Winx Stakes, won by Winx, first-up last preparation.