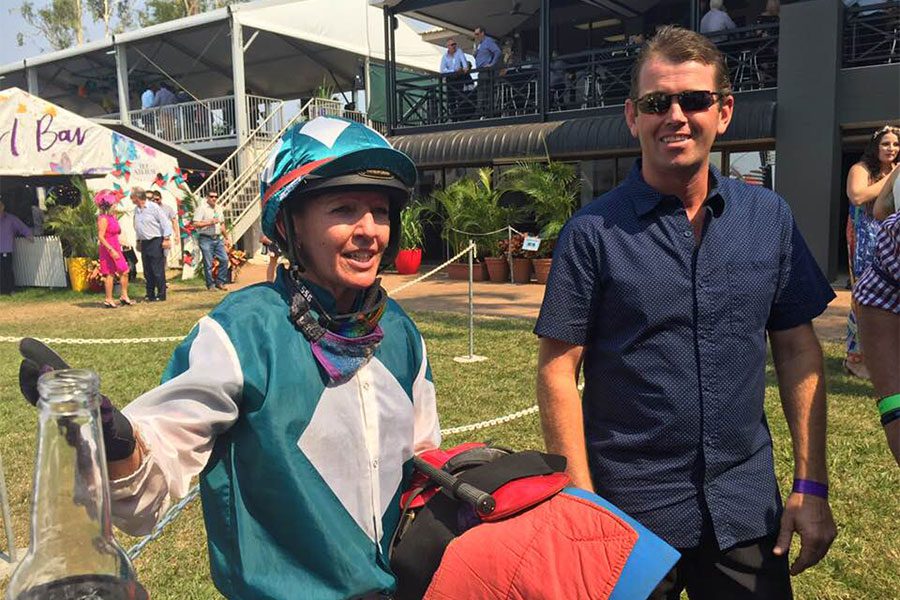 Trainer Jason Manning isn’t counting his chickens just yet, but he has every right to be optimistic come the Darwin Cup Carnival if Saturday’s race meeting at Fannie Bay is any guide.

In the feature race on the Darwin program at the weekend, Niewand (Vanessa Arnott) led from start to finish to overcome Gary Clarke’s Syncline (Stan Tsaikos), who was finishing with a wet sail.

The Mark Nyhan-trained Trident (Sairyn Fawke), who has left his mark in Darwin and Alice Springs in a serious way in the past 14 months, was well adrift in last place before rattling home to secure third prize.

It was Trident’s first start since finishing fourth in the Alice Springs Cup (2000m) on May 1.

Niewand fell agonisingly short in the 2021 Palmerston Sprint when pipped at the post by the Chris Nash-trained Mayameen, so he is seemingly in the mix once again when assessing the Northern Territory’s premier race for the sprinters.

However, it’s clear that Niewand thrives on the Fannie Bay dirt and on Saturday he managed to win the same race for the second straight year.

Victory last year was also the first time he appeared in the Top End after campaigning in NSW and Queensland.

“It was great to get him back into the winner’s circle,” Manning said on Sunday.

“Back on the dirt yesterday, doing what he does best – it was great to see him back.

“That’s him, he loves the style of Darwin.

“I thought he’d run well – more hope than anything.

“I knew we had the horse in the right manner.

“Obviously, all the good horses are stepping out, so when you’re up in that top open company you go to the races with a fit horse hoping they run their best.

“He can jump, roll and maintain a high tempo – and Vanessa was able to get that little break rounding the home turn and, you know, handle bars down and you hope for the best.

“Especially in a bold front running performance – he was going strong, but it was heart in the mouth stuff the last 100m.

“Gary Clarke’s Syncline was coming, but he still held him to a length, so it was a very exciting day.”

Manning clearly has a soft spot for Niewand (7-2-4 from 23 starts) and sent the horse to South Australia following the Darwin Cup Carnival last year to get him out of the heat.

“He has been a great horse since he has joined the stable – has always been really consistent,” he said.

“Obviously we only bought him last year – he had pretty good form and he was always thereabouts on the grass.

“He had the three runs for us here in Darwin and then was narrowly beaten in the Palmerston.

“He actually won the same 1000m open race this time last year, so he is on exactly the same path – touch wood.

“He is a very sound and easy horse to train, and he’ll do the same this year.

“He’ll go to the 1100m open on Guineas Day and then onwards to the Palmerston Sprint.”

Speaking of the Darwin Guineas (1600m) scheduled for July 2 – Day 1 of the Darwin Cup Carnival – Manning might have a contender in the shape of Max Fire.

The South Australian gelding was far from disgraced after finishing fourth on debut in the Top End in the 0-66 event over 1300m for the three-year-olds on Saturday.

Might be a good idea not to dismiss Max Fire so easily after proving competitive in three feature races in South Australia.

Max Fire also finished eighth in the $200,000 Geelong Classic (2200m) in October – renowned as the final lead up race before the Victoria Derby.

Suffice to say, Manning and his owners – including the On Fire Racing syndicate – have every reason to be full of enthusiasm.

“I thought his run on Saturday was a pass mark, he jumped well and I was really pleased with him,” Manning said.

“I wasn’t 100 per cent sure about his first run on the dirt – you bring these three-year-olds up, but he’s got really nice form in Adelaide.

“The 1300m is a nice starting off distance and he pulled up good – very happy for the way he pulled up fitness wise and I look forward to getting him out to the mile in the Guineas in two weeks time.

“We stretched him out to the Derby trial at Geelong last year, so we know he does get a trip.

“There were a couple of nice runs yesterday, including Wilsons Prom, Flying Start, Super Famous, Pacadow and Fischer.

“Peter Stennett’s Pacadow in the mile race (0-58) was very impressive and I know there’s still a couple of three-year-olds that are probably going to step out first up into the Guineas.

“It’s going to be an interesting race for sure.”