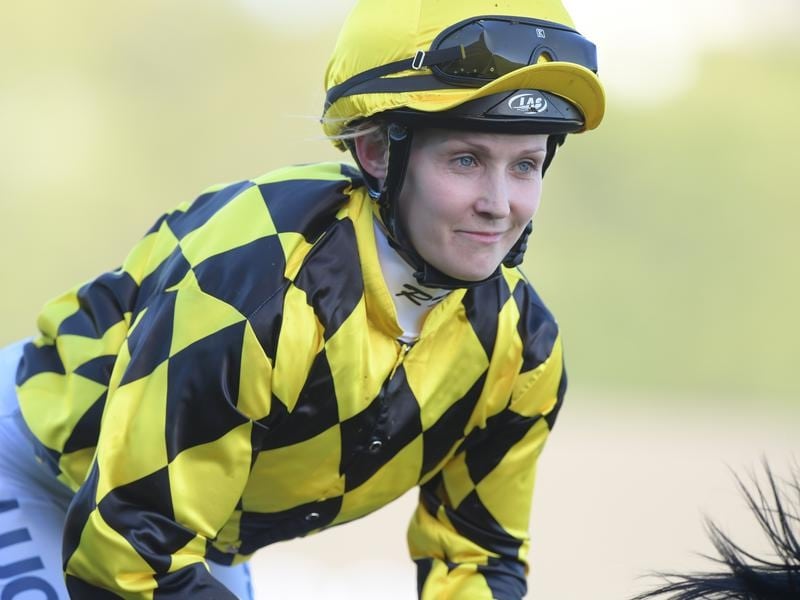 Trainer Mark Newnham and jockey Rachel King have each celebrated a milestone Group One win with Maid Of Heaven in the Spring Champion Stakes at Randwick.

One of three fillies in the 2000m feature on Saturday, Maid Of Heaven ($14) came with a late run to to nail Godolphin colt Aramayo ($4.20) by a long head with the favourite Thinkin’ Big ($3.40), from the Gai Waterhouse and Adrian Bott stable, another 2-1/4 lengths away.

The Arrowfield Stud-owned Maid Of Heaven, who is the second filly to win the race with Yankee Rose the first in 2016, came to the race off an unplaced run in the Flight Stakes a week earlier.

A former jockey and long-time assistant to Waterhouse, Newnham branched out on his own 2-1/2 years ago.

‘That last 50 metres I had my heart in my mouth. I didn’t know whether she’d get there but the last two strides got us over the line.”

Newnham said Maid Of Heaven pulled up so well from the Flight it gave him confidence to back her up.

“I thought she had a really good chance,” he said.

“And I was even more confident when I saw how she paraded. She looked much better for her run last week.

“The only thing I said to Rachel was to get her in the clear from the top of the straight and that will give her her chance.

“When Rachel first got here from England there were plenty of people telling her it will be tough to be an apprentice and make it in Sydney. She has proved them all wrong.”

The 28-year-old King came to Australia five years ago and credited Newnham with helping her along the way.

“It’s amazing. It’s really good to get it done, especially because it’s really special doing it for Mark,” she said.

“He helped me a lot to get going. He was the one really pushing me to have a go and get me started. He gave me a lot of guidance early.”

King has obviously been taught well.

“The race just ran perfectly how Mark and I discussed it and how we wanted it to go,” she said.

“I was confident she’d at least run second but yeah I was wrapped, she really dug deep that last 100 metres.

“I think my throats sore from shouting at her.”

Newnham said Maid Of Heaven would now be sent for a spell while Aramayo firmed from $13 to $7 equal favourite for the Victoria Derby with the Darren Weir-trained Extra Brut, winner of Saturday’s Listed UCI Stakes at Flemington.