Mahuta form, odds and tips for the 2016 Bletchingly Stakes 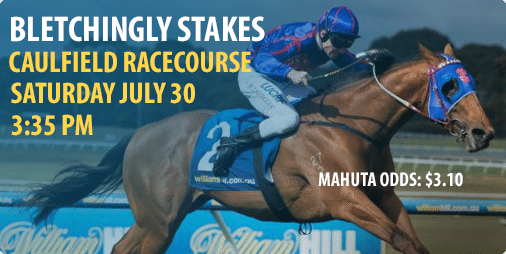 GROUP racing is back this Saturday with the Group 3 Bletchingly Stakes at Caulfield.

The $160,000 sprint has a spring-feel about it with the likes of the Darren Weir-trained Mahuta and fan-favourite The Cleaner.

The rain hasn’t quite relented yet, so a wet track is expected, but there’s quality racing on the nine-race card which starts with the Carol Kelly R84 Plate where last start winner Turbo Street is looking to go back-to-back.

Big fields all day at Caulfield and Crownbet.com.au is giving punters a bonus bet (up to $50) if your horse runs second in any race on the card.

Tony McEvoy lines up last start winner Turbo Street which was too good against a similar field at Moonee Valley. The four-year-old rises up in weight to 58kg, but Craig Williams sticks with it and it can handle all track conditions. It opened at $2.90 and has shortened to $2.80. We’re expecting that price to stay steady throughout the week.

Khutulun looked the winner last Saturday before peaking on its run late. The Luke Oliver-trained mare is trained at Caulfield where it has placed in four from five starts and the rise up to 2000m is ideal. It has placed in all four runs at this distance and the return to form last start was encouraging. It is finding it hard to win a race, but this is the race where it could happen. $4.40 with bookmakers.

Magic Consol is a seven-time winner which flashed home late in handicap grade last start. It rises significantly in weight, but apprentice Ben Thompson takes 2kg off its back and it has the ability to win at this level. Bookmakers kept it safe by opening it at $4.60, but it has drifted out slightly to $4.80. Remains a solid each way chance.

Tony McEvoy lines up another talented runner with Scherzoso. The last start winner at Caulfield produced a good effort to score by a neck and it looks well placed to continue that form. The imported gelding has now won two from its last five starts and although it carried only 51kg to victory last start, the rise up in distance is what it has been looking for. It is bred to stay the 2400m and the $3.80 is a respectable price on offer.

The current favourite is Bondeiger which had no luck behind Scherzoso last start. The Darren Weir-trained horse has had two starts at this distance and run poorly on both occasions, but it has shown good ability to stay in its last two races which is encouraging. It was travelling well last start before being blocked at a vital stage and it has the ability to turn the tables. It’s currently at $2.70 and that price should stay firm.

Oncidium Ruler won at rating 70 grade last start and despite this being a rise in grade, punters have supported it in the betting. The Michael Kent-trained gelding is currently on the third line of betting at $6 and it is bred to handle the staying distance. This isn’t an easy race, but it handles wet tracks which is a positive.

Joseph Pride has sent last start winner Kentucky Miss to Melbourne after winning well at Wyong. The two-year-old filly showed some class with the win having taken on some tough opposition prior. It finished 3.7 lengths behind Honesty Prevails in the Widden Stakes prior to finish fifth in the Sweet Embrace. It only battled behind Calliope in the Magic Night, but this is easier and it has dropped from its opening price of $5 to $4.40.

Another well-supported runner has been Crafty Cop. The Hawkes-trained colt opened at $3.40 and is the current favourite at $3 after running third behind Attention in the Baillieu at Rosehill. It won its maiden by 2.8 lengths prior to that run and it also won a trial in preparation for this. There is plenty of upside about Crafty Cop and it should be tough to beat.

Street Em Boss is on debut with no trial form, but it must have talent to start its career at this level. The Street Boss gelding gets nicely down in the weights at 54kg and despite drifting in the market from $11 to $12, it could run a good race at each way odds.

Greg Eurell lines up Carterista which flew home for second on debut at Caulfield. The filly by Bushranger was a $51 chance on debut, but it arguably should have won. Craig Williams takes over the riding duties from Chris Parnham which is a big boost and the much shorter price of $4 is an indication of its ability after opening at $6.

Anatola has been expensive for punters at its last two starts, but it wasn’t disgraced when second last time out. The Mick Price-trained filly won its first two starts with ease and although it hasn’t won in three starts since, it has been taking on some tough fields. Ben Allen takes 3kg off its back which brings it right into contention at $3.30.

Yasnat should be included in calculations after posting three consecutive wins. The Matthew Dale-trained filly was a strong winner at Moonee Valley last start and all three wins came on a heavy track. The daughter of Written Tycoon isn’t suited by the weights at 59kg, but Dunn takes 2kg off its back which will bring it into contention. Unwanted in the market at $15, but it has each way claims.

Alamonteel defeated only a field of four runners last start, but it looks on the way up. The Patrick Payne-trained stayer has now won four from 14 starts and the daughter of Alamosa looks best on rain-affected ground. Jessica Payne takes its weight down to 54.5kg which brings it into contention at $4.80.

Hursley will have to do it tough with 60kg on its back, but it does get Craig Williams in the saddle which could be the difference. The Chris Waller-trained gelding was close behind O’lonera on this track last start and it’s a type which could progress to the autumn carnival next year. It opened at $4.40 and has subsequently been backed into $3.80.

Bring A Rose has won only one start from six attempts, but it coped well against a similar field last start. The Ciaron Maher-trained filly finished fourth behind O’lonera and it stays down in the weights at 54kg. It gets the weight advantage over the top elects which should take it close.

Butterboom was far from disgraced when second at Rosehill last start and it should shape up nicely for this. The Joseph Pride-trained mare missed the jump and had too much work to do, but is rises up in grade for this which does give us confidence. The four-time winner handles rain-affected tracks and bookmakers have kept it steady at $3.50 throughout the week.

Forgeress is a six-time winner from 30 starts which has good form at Caulfield. The experienced six-year-old finished second behind Telopea last start at Flemington and the form out of that race should stack up nicely for this. Its best form comes on heavy tracks and with conditions to suit, it looks a strong chance here at $5.50 after opening at $5.

Miss Softhands resumed better than expected with a fifth place finish at Caulfield and it will only improve from that. The Colin Little-trained mare won three consecutive races over the summer and it’s a much better chance on a good track, but if Little decides to run it here, it could show some cheek. Don’t discount with Oliver in the saddle at $7.50.

Fast ‘n’ Rocking was given a disastrous ride by Dwayne Dunn in the Monash Stakes and he will be looking to atone in this. The Hayes/Dabernig-trained gelding looked good prior when finishing fourth in the Group 1 Goodwood Handicap and that form looks strong for this field which doesn’t contain many superstars. It’s long overdue a win and the $3.80 available is a fair price.

Mahuta is fresh up after failing badly in the Australian Guineas, but its form prior was hard to fault. The Darren Weir-trained colt has won six from nine starts including two-from-two at Caulfield. Among those wins include the Carbine Club, Sandown Guineas and the Autumn Stakes. If it can find its fitness in a fresh state then it looks very hard to get past. Top bookmaker elect at $3.20.

Thermal Current is an inconsistent type which could cause an upset here. The Darren Weir-trained gelding has form on soft tracks and it was working home well enough behind Wild Rain in the Monash Stakes last start. It won well prior by 1.25 lengths at Sandown and at $17 for win, it can’t be left out of calculations.

Prince Of Brooklyn has returned to form with back-to-back placings after showing plenty of talent in its first two starts. The Mick Price-trained colt won its first two starts which included the Vobis Gold Elvstroem Classic and it had no luck in the Exford Plate following that. It prefers wet ground and the talented Ben Allen takes a valuable 3kg off its back. $5.50 is a good each way price.

Wall Street Wolf couldn’t have been more impressive last start when winning by eight lengths at Geelong. Having run second at Flemington on debut behind Rich Charm, the money was on last start and it paid $1.14 on win totes. The nicely bred son of Written Tycoon drops down in weight here to 54kg with Dunn in the saddle and the money has come for it again. It opened at $2.80 and is now at $2.50 with more money expected to come.

Four-time winner Mr Individual won well on this track last start and it only has the wide draw to cope with. The three-year-old does get a claimer in the saddle which helps and it’s a fit runner. Bookmakers are offering $9 which is worth the risk.

Magicus is the current $3.20 favourite following an impressive one-length win at Moonee Valley last start. The Chris Waller-trained gelding has won twice on a slow track and it looms as a major winning chance in this grade again. Wouldn’t want to take shorter odds than currently available, but the $3.20 is a good price.

So Does He is capable of an upset and it won well in this grade two starts back at Sandown. The son of Bel Esprit flashed home late behind I’m Ablaze last start and it runs best at this distance. $16 is over the odds for a consistent type with a claimer in the saddle.

Caprese was a winner in this grade five starts back and it hasn’t been far away since. The Corstens-trained gelding ran second at Caulfield last start and it didn’t have much luck after being caught wide throughout. It can handle wet ground and $7 suggests a good run is expected.