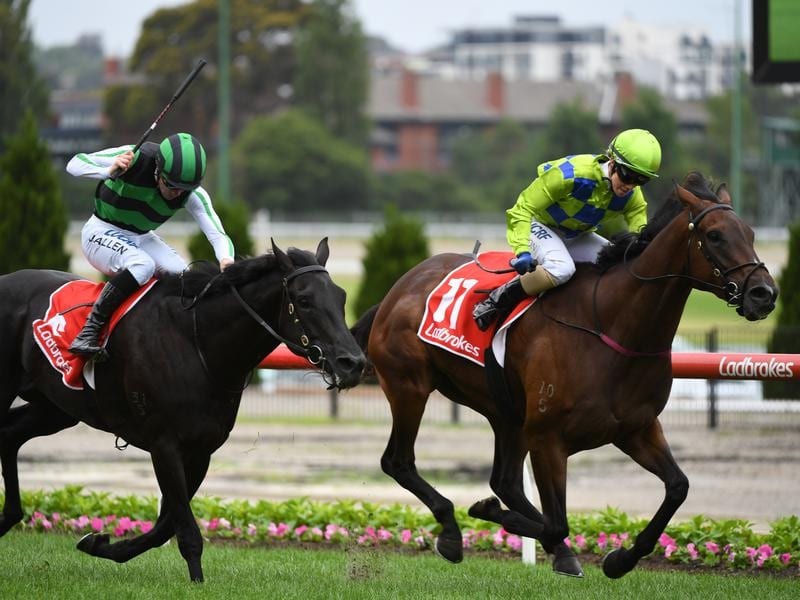 Lightly raced Mahis Angel has notched his second city win in five career starts with a gritty performance on his home track at Caulfield.

The Lloyd Kennewell-trained Mahis Angel ($4.40) was forced to fight off a challenge from the Damien Oliver-ridden Super ($9.50) in Wednesday’s Ladbrokes Multiverse Handicap (1600m) for three-year-olds and was up to the task to win by a short head.

Favourite Royal Performance ($3.10) was another neck away third.

“He’s been a bit of a work in progress,” jockey Joe Bowditch said.

“Two starts back at Flemington he really over-raced.

“Lloyd changed the bit and put a tongue-tie on him and he’s been a lot better.

“He’s still learning how to race and do everything properly so I think once he learns to settle he’ll be a nice horse over a trip.”

Bowditch said the tempo slowed mid-race which did not suit Mahis Angel but the colt responded when he needed to once Super closed on his inside in the final 200m.

“He’s probably going to be a better horse when the speed is on,” he said.

“He hit the front and stargazed a bit but every time the horse inside him got near him he kept finding enough.”