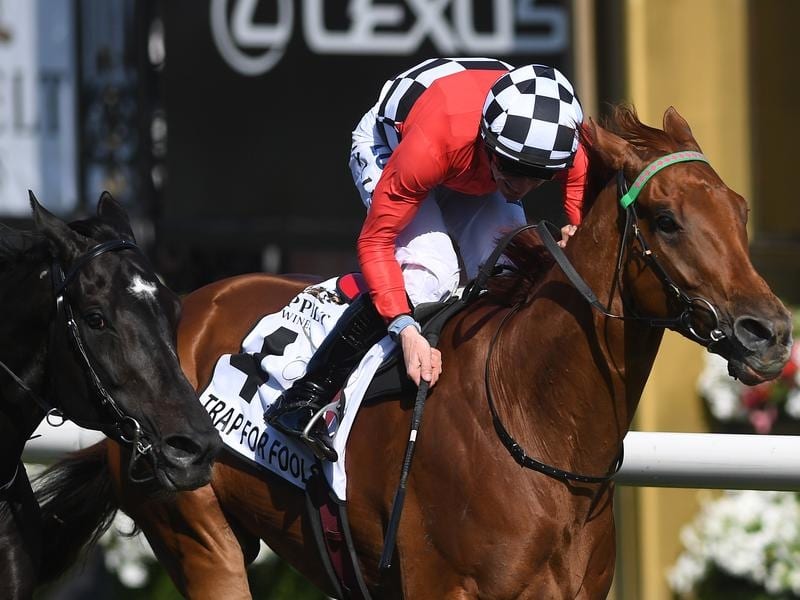 Trap For Fools has figured in a switch of plans with the Mackinnon Stakes winner to return to Perth for the summer carnival.

Trainer Jarrod McLean confirmed his stable star has been booked on a charter flight out of Melbourne on Sunday night and will contest the Group One Kingston Town Classic at Ascot on December 8.

“There was a change of plan this afternoon,” McLean said on Thursday.

“That’s alright, I’m happy with that.”

Trap For Fools produced one of the shocks of the Victorian spring carnival with his front-running win in the Mackinnon Stakes.

One of the outsiders in the $2 million race, Trap For Fools held off Irish Derby winner Latrobe and Victoria Derby hero Extra Brut.

The win came after Trap For Fools was overlooked for a start in the Cox Plate when the Moonee Valley Racing Club considered his form wasn’t up to weight-for-age standard.

Formerly trained by Lindsey Smith in Perth, Trap For Fools was sent to McLean for a spring campaign with the Mackinnon Stakes win coming at the horse’s ninth Victorian start.

Under Smith, Trap For Fools strung together six successive wins before finishing unplaced in the Perth Cup.

McLean, who doubles as Darren Weir’s Warrnambool assistant, stays at Smith’s property during the summer carnival.

“I’ll still be training him but we’ll be staying with Lindsey when we’re over there,” McLean said.

Trap For Fools will be joined on Sunday’s flight by at least four Weir-trained horses targeting the Perth carnival.

Bookmakers fielding pre-post on the Kingston Town Classic have reinstated Trap For Fools as the $5 favourite.