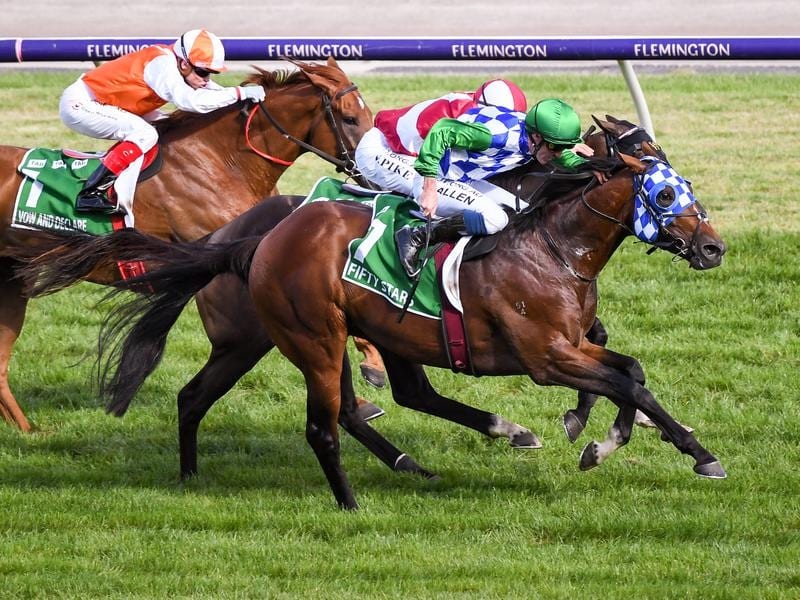 Tom Dabernig doesn’t think there is a better way to attack the Mackinnon Stakes than with a pair of horses who are proven at the track, distance and class.

Dabernig and Ben Hayes will be represented by two horses who between them can boast wins in the past three Australian Cups which, like the Mackinnon, is run at Flemington over 2000 metres at Group One level.

And the other advantage they will have, according to Dabernig, is that both horses have been specifically aimed at the Mackinnon Stakes.

Dabernig has used the blueprint which won the Australian Cup for Fifty Stars as he is backing him up a week after a race.

In the autumn, Fifty Stars won The Blamey Stakes and then took out the Australian Cup seven days later.

Last Saturday Fifty Stars finished fifth in the Cantala Stakes when he came from well back in a run which pleased his trainers.

“He’s pulled up well. Everything suggests he’s on track for the Mackinnon. He’s looking for 2000 metres now,” Dabernig said.

Last year Harlem finished unplaced in the Mackinnon Stakes but he had a much busier campaign and had contested the Cox Plate at his previous start and finished eighth.

This time around Harlem heads to the race off a second in the Coongy Handicap at Caulfield on October 14 after the stable decided to wait specifically for the Mackinnon .

“This is the race we’ve had him set for all spring and he loves this track and distance and will have Craig Williams on. He should run very well,” Dabernig said.

Fifty Stars will be ridden by his regular rider John Allen and is a $8.50 chance with TAB fixed odds with Harlem at $21.