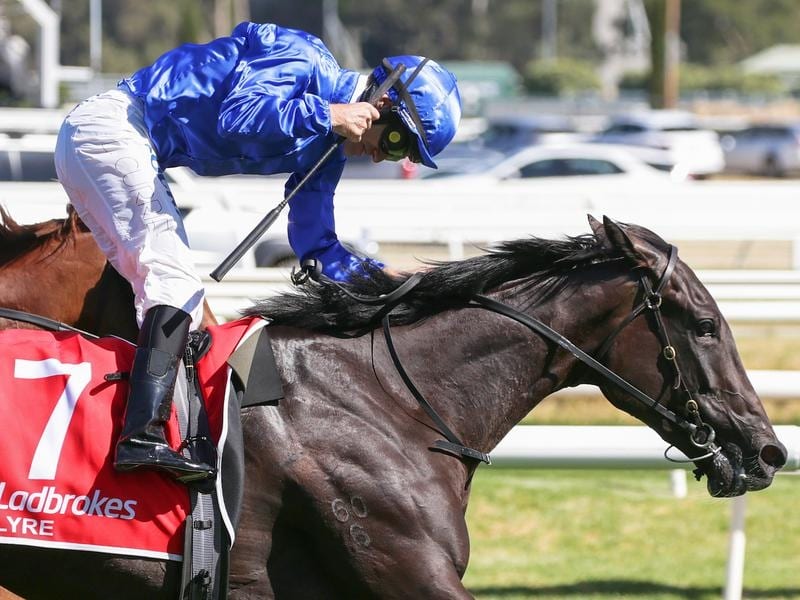 An impressive barrier trial on soft ground and an encouraging piece of work at Randwick has Lyre poised for her shot at joining a select group of two-year-olds to win the Blue Diamond and Golden Slipper double.

The Anthony Freedman-trained Lyre took her record to three wins from four starts when she came from back in the field to win the $1.5 million Group One Blue Diamond (1200m) at Caulfield last month.

After giving the Godolphin-owned filly some time to freshen up after that victory on February 23, the decision was made to give the filly her chance in Saturday’s $3.5 million Group One Golden Slipper (1200m) at Rosehill.

Lyre is striving to become the sixth juvenile to complete the Blue Diamond-Golden Slipper double and first since Sepoy in 2011.

Courtza is the most recent filly to achieve the feat 30 years ago.

Rosehill was rated in the heavy range on Wednesday and Freedman’s son and assistant Sam Freedman has a feeling the filly will handle rain-affected ground, although he admitted if it was a bottomless track it would be an unknown.

Lyre won a barrier trial last week at Randwick on a soft track and Freedman said she also worked stylishly on Tuesday.

“Luke Currie was raving about her and said she seemed to love the ground in the trial,” Sam Freedman said.

“And again on Tuesday morning she galloped on the course proper at Randwick, worked with a mate and went past like it was standing still.”

While the Blue Diamond had been Lyre’s main target, Freedman said the filly had continued to thrive for her Golden Slipper tilt and they couldn’t be happier with her condition.

In an open Slipper, Lyre was on the fifth line of betting at $11 on Wednesday.

“It hasn’t been done for a while, the Blue Diamond-Slipper double, especially without a run in between,” Freedman said.

“So from that perspective history is against her but she doesn’t know that.

“She’s possibly underestimated a little bit. She can’t have done any more to grasp the attention of punters and anyone else, but in our eyes she’s just going as well as she ever has, so she should not be underestimated.”

Lyre is one of five two-year-olds in the Slipper who raced in the Blue Diamond along with Lankan Star, Free Of Debt, Loving Gaby and Catch Me.

Lyre is one of six Godolphin-owned chances set to run in the 16-horse field along with Microphone, Tenley, Pin Sec, Kiamichi and Exhilarates who are all trained by James Cummings.