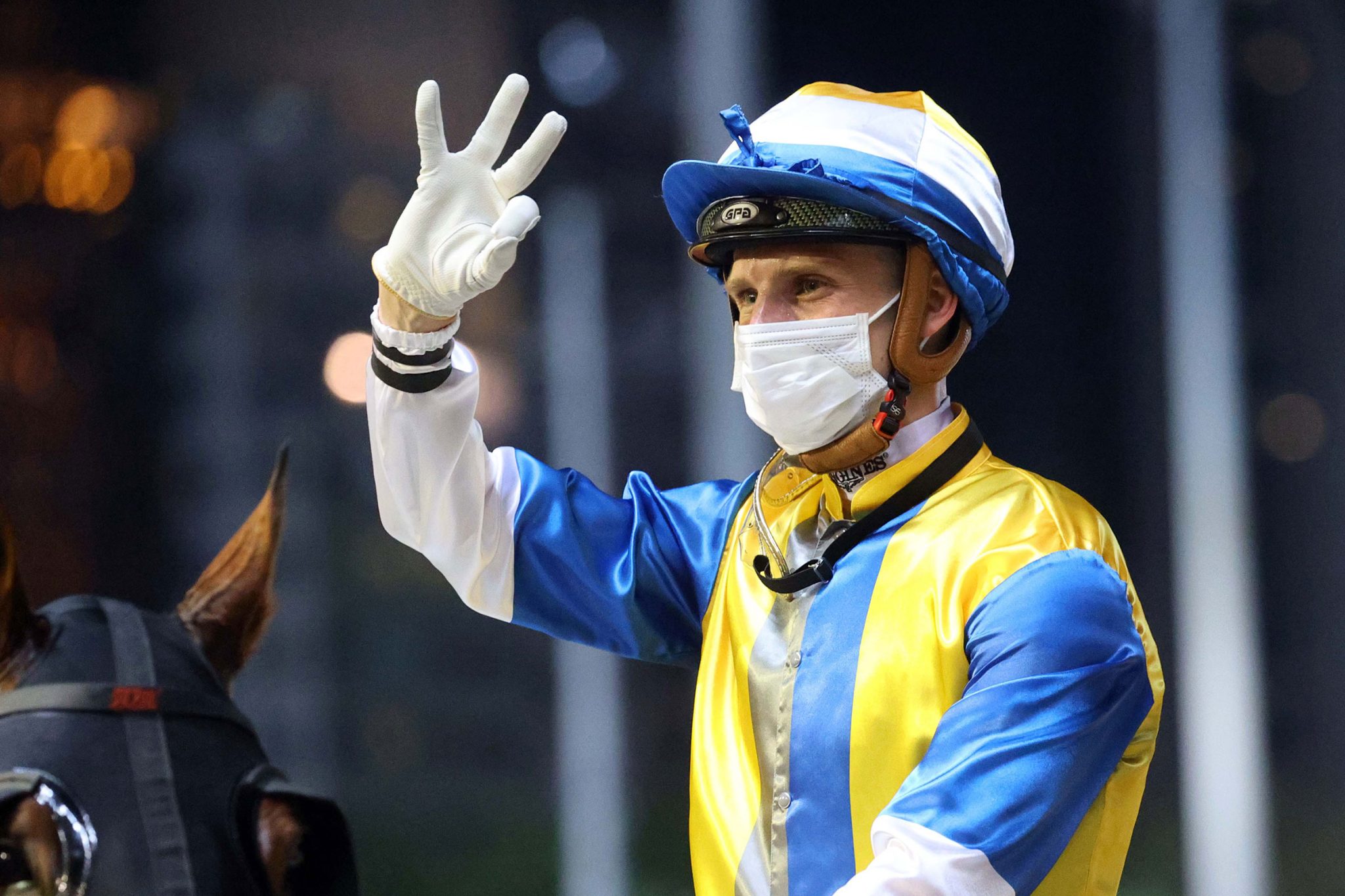 Seriously injured in a fall in the Group 1 LONGINES Hong Kong Sprint (1200m) on December 12, Hewitson’s persistence was duly rewarded with consecutive wins on World Famous (Ricky Yiu), Valiant Elegance and Xponential – who are both trained by Whyte – to seal a determined, methodical recovery.

All three of Hewitson’s winners, along with Frankie Lor’s Rewarding Together, who claimed the Class 3 Min Fat Handicap (1200m) for Matthew Chadwick, had been stabled in Conghua before returning to Hong Kong for tonight’s meeting – a week after Conghua produced a trio of winners at the city circuit.

Notching the first treble of his career outside of his native South Africa, Hewitson suffered a fractured pelvis in December’s fall and was sidelined for several weeks before logging a frustrating sequence of minor placings.

The amicable 24-year-old struck the target with his first Hong Kong double at Sha Tin last Sunday (April 24) and made it five wins and two seconds from seven rides across successive meetings with his Happy Valley treble this evening.

“It’s fantastic. I’m very, very happy. All things are going well and just credit to everyone who has given me opportunities. It sounds like a stuck record, but you can’t do it without opportunities and I’m very happy for that,” Hewitson said after Xponential prevailed in the first section of the Class 4 Tsap Tseung Handicap (1200m).

“Things are going well. I’ve been working hard and getting as many good results from horses that were probably running above expectations and then the opportunities came.

“It took one or two wins just to get my confidence back up and, fortunately, I’m getting lots of rides that are worth coming to the course for and making the most of it.

“It’s been fantastic and I’ll never take anything for granted anymore. I’m just going to keep accepting those opportunities and make the most of them until the end of the season and come back in good spirits for next season.”

With a second placing on his opening ride of the night on Day Day Rich, Hewitson found the target with Ricky Yiu’s World Famous in the Class 4 Tsoi Tak Handicap (1650m) before teaming with Whyte and Valiant Elegance in the second section of the Class 4 Tsap Tseung Handicap (1200m) and then Xponential.

Underlining his rampant confidence, Hewitson then added another second on Gameplayer Times in the Class 3 Shing Ping Handicap (1650m) behind Manfred Man’s Viva Hunter, who gave Joao Moreira a double and a 108-106 lead over Zac Purton in the jockeys’ championship.

Purton closed the meeting by snaring the Class 2 Cheong Ming Handicap (1000m) on Francis Lui’s consistent Stoltz, who claimed a HKD$1 million High Achievement Bonus for winning at Class 2 or above with a rating of 80 or higher (89) before reaching five years of age.

Perched behind leader and eventual runner-up Classic Unicorn, Stoltz powered to the line in 56.37s with Nervous Witness in third place.

Frankie Lor regained the lead from John Size in the pair’s engrossing battle for the trainers’ championship when Matthew Chadwick pegged the second leg of a riding double with Rewarding Together’s victory in the Class 3 Min Fat Handicap (1200m).

Whizz Kid justified his short quote for Tony Cruz and Joao Moreira to land the Class 3 Hawthorn Handicap (1000m) in a slick 56.27s, registering his fourth win from his six past starts – all over the five furlongs.

“He’s a young, rising horse and he’s definitely an improving type of horse. Even carrying top weight (133lb), he was two tenths of a second faster than when he won his previous race, so I’m pretty happy with his performance. He had to improve to win this race today so I’m very happy. We’re going to geld this horse and wait for next season.”

“I really happy for the owners. This horse had a heart irregularity after his last run so the owners have had to be patient,” Hayes said. “It’s good that the horse has made a full recovery and he got the win tonight.”

“He’s taken a long time to really acclimatise and get accustomed to Hong Kong pressure but the last two runs have indicated he’s started to find his form and with the light weight and extra distance, it certainly suited him,” Whyte said.