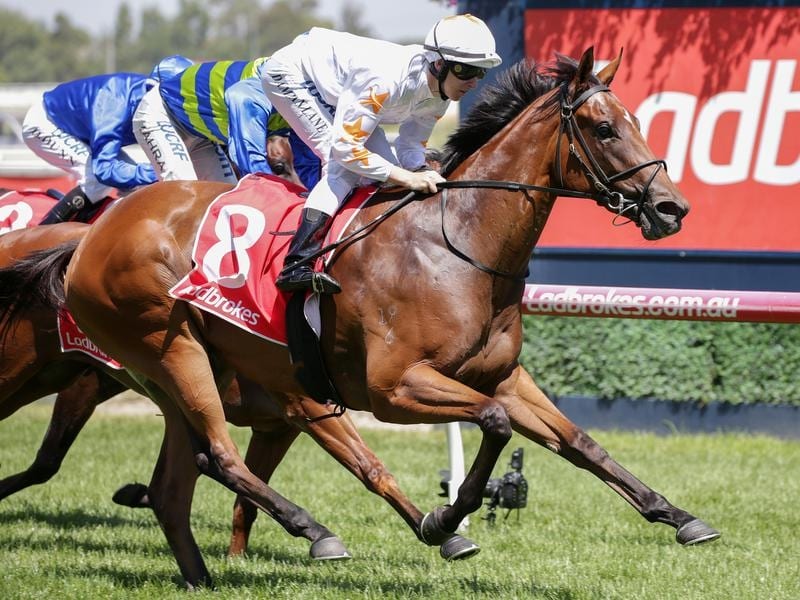 If Loving Gaby isn’t the best two-year-old in training, she can certainly lay claim to being the toughest.

When the Ciaron Maher and David Eustace-trained filly lines up in the Champagne Stakes (1600m) at Randwick on Saturday she will become the only youngster to have contested all three legs of Sydney’s juvenile triple crown.

And there will be no Godolphin-trained rival to stand in her way.

Sheikh Mohammed’s operation has won all three Group One two-year-old races this season with Lyre (Blue Diamond), Kiamichi (Golden Slipper) and Microphone (Sires’ Produce) but will not have a Champagne Stakes runner after deciding not to accept with Flit.

Not only did Loving Gaby contest the first two legs of Sydney’s two-year-old triple crown – the Slipper and Sires’ Produce Stakes in which she was fourth and second respectively – she also finished sixth in the Blue Diamond Stakes in Melbourne.

It has been a remarkable effort by a filly in her first racing campaign but despite competing at the highest level in three of her four starts, she has not been overtaxed.

“We only went one run into the (Blue) Diamond then we came up to Sydney and hopefully that pays dividends.

“She is tough and while she still needs to learn exactly how to race, she’s a filly with a good constitution.”

Loving Gaby was the clear-cut $2.30 favourite on Thursday to score a breakthrough Group One win in the Champagne Stakes with Castelvecchio at $3.60 considered her only genuine rival.

A daughter of I Am Invincible, Loving Gaby is untested at a mile but there is stamina in her pedigree with her dam Maastricht placed in an Adrian Knox Stakes.

Eustace has no doubt she is a deserving favourite for Saturday and will be hard to beat if she races up to her recent form, as does James McDonald who has stuck solid after partnering her for the first time last start.

“She’s favourite and on form should be, so hopefully she gets the job done,” Eustace said.

“It would be a great way to end the carnival.

“We’re now on a drier track which is probably going to suit every horse but we’re confident she’s going to be better on top of the ground too.”

Maher and Eustace are chasing their second Group One win of the Sydney autumn after capturing the Coolmore Legacy Stakes with Kenedna last weekend.