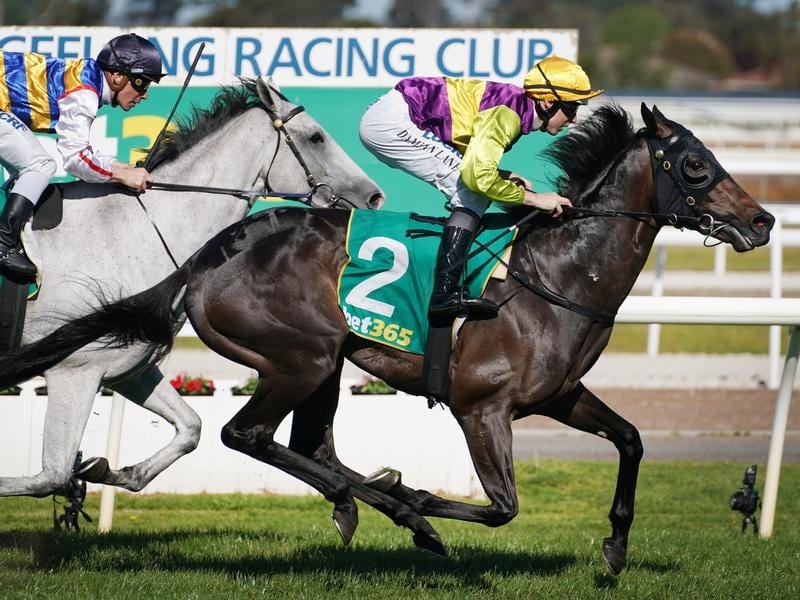 A better-behaved Long Jack has stamped his claims for a tilt at the Victoria Derby with a strong staying performance to win the Geelong Classic.

Murray Baker, who trains in partnership with Andrew Forsman, won the Geelong Classic two years ago with Weather With You who went on to finish eighth behind Ace High in the Derby at Flemington at his next start.

Ridden by Damian Lane, Long Jack ($6) scored a half-length win from the $3.30 equal favourite Southern Moon with the co-favourite Relucent a length away third.

Baker praised the ride of Lane who weaved a passage through the pack to win the Listed race over 2200m.

However Baker and Forsman will need a new jockey for Long Jack in the Derby at Flemington on November 2 with Lane sidelined through suspension courtesy of his winning Caulfield Cup ride on Mer De Glace.

Baker said Long Jack was more settled on course on Wednesday after proving hard to saddle at Flemington when sixth on October 5.

“We had a real colt on our hands last start,” Baker said.

“We had to resaddle him twice, he was out of his tree so we swapped the gear around on him for today.

“He’ll be in the Derby. We think he’s a good horse and can stay but whether he’s three or four months away, we’ll find out.”

Lane said he had noticed a change in Long Jack’s demeanour on the training track since blinkers had been applied.

He said Long Jack also presented in the mounting yard a lot better which allowed him to conserve energy while adding the colt will a Derby contender.

“Unfortunately I’ll be watching on the sidelines, but he’ll go there in good order and there’s no reason why he can’t run well,” Lane said.