Little Avondale and Per Incanto step up to the big time 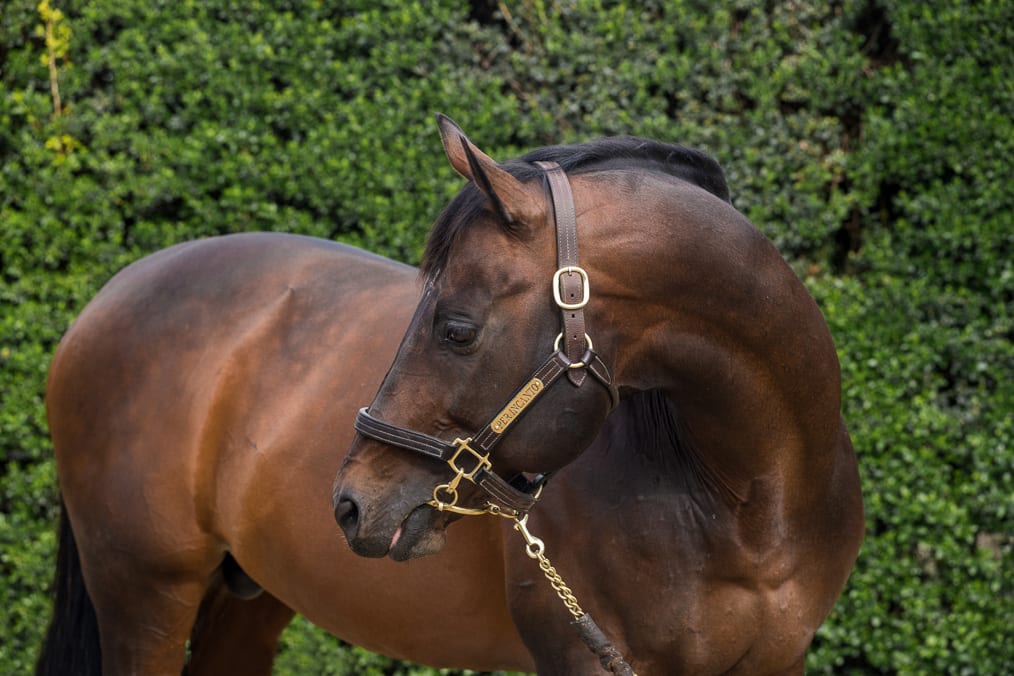 Karaka 2020 looms as a bumper week for Wairarapa’s Little Avondale Stud and their high-flying stallion Per Incanto. The son of Street Cry is third on the New Zealand sires’ premiership in terms of prize-money, and his 37 winners put him in equal top spot alongside Waikato Stud champion Savabeel.

Per Incanto has sired a total of 182 winners from 297 runners, with 14 individual stakes winners including Shadows Cast, Santa Monica and Dal Cielo at Group 1 level. Per Incanto has 14 yearlings in the catalogue for Book 1 of the 2020 New Zealand Bloodstock National Yearling Sale – a far cry from the humble position he was in when this crop of yearlings was born. “He’s having another wonderful trot,” Little Avondale’s Sam Williams said. “He has eight individual stakes performers already this season. He had the Group 1 winners Santa Monica and Shadows Cast last year, and he’s just kicked on from there.

“He has Madam Hass and Hasstobegood, who both ran very well at Ellerslie on Sunday and are pointing towards the Karaka Million meeting. “He also has Belluci Babe, who won by two lengths on debut at Kembla Grange on Saturday and was 0.4 seconds outside the track record. Bjorn Baker is doing handstands about her. “They’re all three-year-olds who are starting to come through from Per Incanto’s first better-bred crop. Up until this crop, everything he was doing was from back when he had a $5,000 service fee (now $17,500).

“And prior to that crop, he’d only ever had three yearlings in Book 1 at Karaka (then known as the Premier Sale). They were the stakes winners Magnum and Indecision, and also Star Performance, who won on debut in Hong Kong and has been mentioned as one to follow in the lead-up to the Hong Kong Derby (2000m). Three out of three ain’t bad.”

Per Incanto has enjoyed greater recognition with a total of 30 yearlings in Book 1 in the last two years, and he has another strong representation in 2020. Little Avondale will themselves offer 10 of those Book 1 yearlings, including Lot 403 – a colt out of the Group 1 Windsor Park Plate (1600m) and New Zealand Thoroughbred Breeders’ Stakes (1600m) winner Xanadu. “This year is easily Little Avondale’s biggest draft, and it’s the best line-up of Per Incanto yearlings we’ve ever taken to Karaka,” Williams said. “The Xanadu is a very, very attractive colt. He’s a big horse, like her, but he’s so athletic. He looks like a real runner, and Danny Rolston (NZB’s bloodstock sales manager) commented to me that he looks like a stallion. “He’s the complete package. He has the presence and he has the pedigree page, and he’s the first yearling out of Xanadu to go through the sale ring.”

Elsewhere in Little Avondale’s 22-strong draft for Book 1, there is a filly by Written Tycoon out of the Group 1 ATC Champagne Stakes (1600m) winner Pasadena Girl, who will go through the ring as Lot 165. “Outside of the likes of Waikato and Cambridge, there won’t be too many drafts this year that have two yearlings out of Group 1-winning mares,” Williams said. “The Pasadena Girl filly is a lovely type who we’re really happy with. Three other cracking fillies in the draft are daughters of Kekova (Lot 22), Gymnast (Lot 633) and Second Obsession (Lot 265). They’re all by Per Incanto. “We’ve also got a Hinchinbrook and six Savabeels, so we’ve got very strong representation of proven sires in our draft this year.”

Another notable feature of Little Avondale’s draft is Lot 557, a Savabeel colt out of a sister to stakes winners Crepe de Chine and Glam Slam. The colt is a joint venture with Boys Get Paid, who bought a 50 percent share when he was a weanling with the goal of pinhooking him at Karaka. “That colt is a real typical Savabeel – a strong dark colour, an athletic look and a great temperament,” Williams said. “We really like him. “The only disappointing thing about him is that, even though we bred and raised him, he doesn’t have our Little Avondale brand. He was born in Australia and branded over there. But never mind – he knows that he was reared on the good grass over here.”

Williams believes that good grass is going to be a key factor in what could be a highly successful sale at Karaka. “Obviously it was an enormous sale on the Gold Coast, and the horses over there all looked great, but they’ve had extremely dry conditions over there while preparing those yearlings,” he said. “When our Brazen Beau went through the ring over there (a colt out of Fortune’s Choice, sold to Mick Price Racing for $220,000), Mick Price asked me where he was reared. I told him he was reared in New Zealand, and Mick said, ‘That’s all I need to know.’ “We’ve had much better luck with conditions over here, and I’m rapt with the way our yearlings are looking in the lead-up to Karaka.”