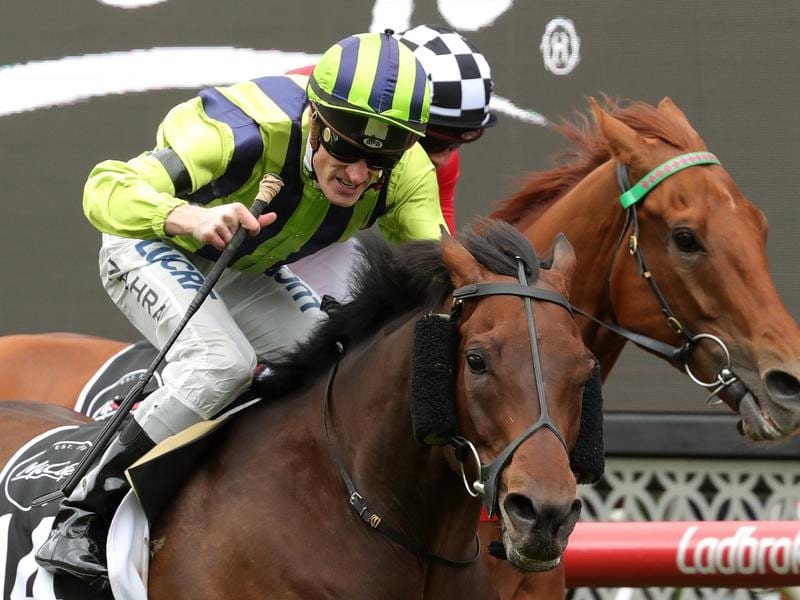 Ventura Storm will be racing for his career on the Flat when he runs over a staying trip at Flemington.

The Moonee Valley Gold Cup winner is one of four stayers Lindsay Park will have contesting the Paddock Plate on Saturday.

Ventura Storm, who will be joined by Neufbosc, Valac and Sin To Win in the 2520m race, has not been successful since his Moonee Valley Gold Cup success in 2018 despite starting 20 times since.

Co-trainer Tom Dabernig is hoping some recent schooling over hurdles can spark the gelding into form.

Lindsay Park schooled Sin To Win before he ran second at Flemington in April and the stable is hoping for similar results with Ventura Storm and Neufbosc.

“Depending on how Ventura Storm and Sin To Win perform on Saturday, a jumping career may be getting discussed,” Dabernig said.

“There are Flat races coming up for Ventura Storm but he’s not great on wet ground, so if he runs a good race we may pursue a couple more mile-and-a-half races.

“But if he runs an even fourth or fifth, we might look at a maiden hurdle.”

Ventura Storm had developed a habit of flicking his head around in recent races, a trait Dabernig said had been eradicated by the recent schooling.

Dabernig said Tom Ryan had ridden all three horses in their hurdle schools and felt Ventura Storm was the most natural of the trio but he was also keen on Sin To Win as a potential jumper.

While Ventura Storm and Sin To Win may end up over obstacles, Dabernig doubts Neufbosc will take that path.

Neufbosc came to Australia with high expectations, but has placed only once in 10 starts for Lindsay Park.

“There’s no physical reason for his disappointing form so we’re hoping some schooling might help his fitness levels and switch him on a bit,” Dabernig said.

Valac is the remaining runner of the Lindsay Park quartet and is having his third run after a spell.

“He ran a really good race first-up then found himself in an awkward spot last time, so it was possibly a forget run,” Dabernig said.