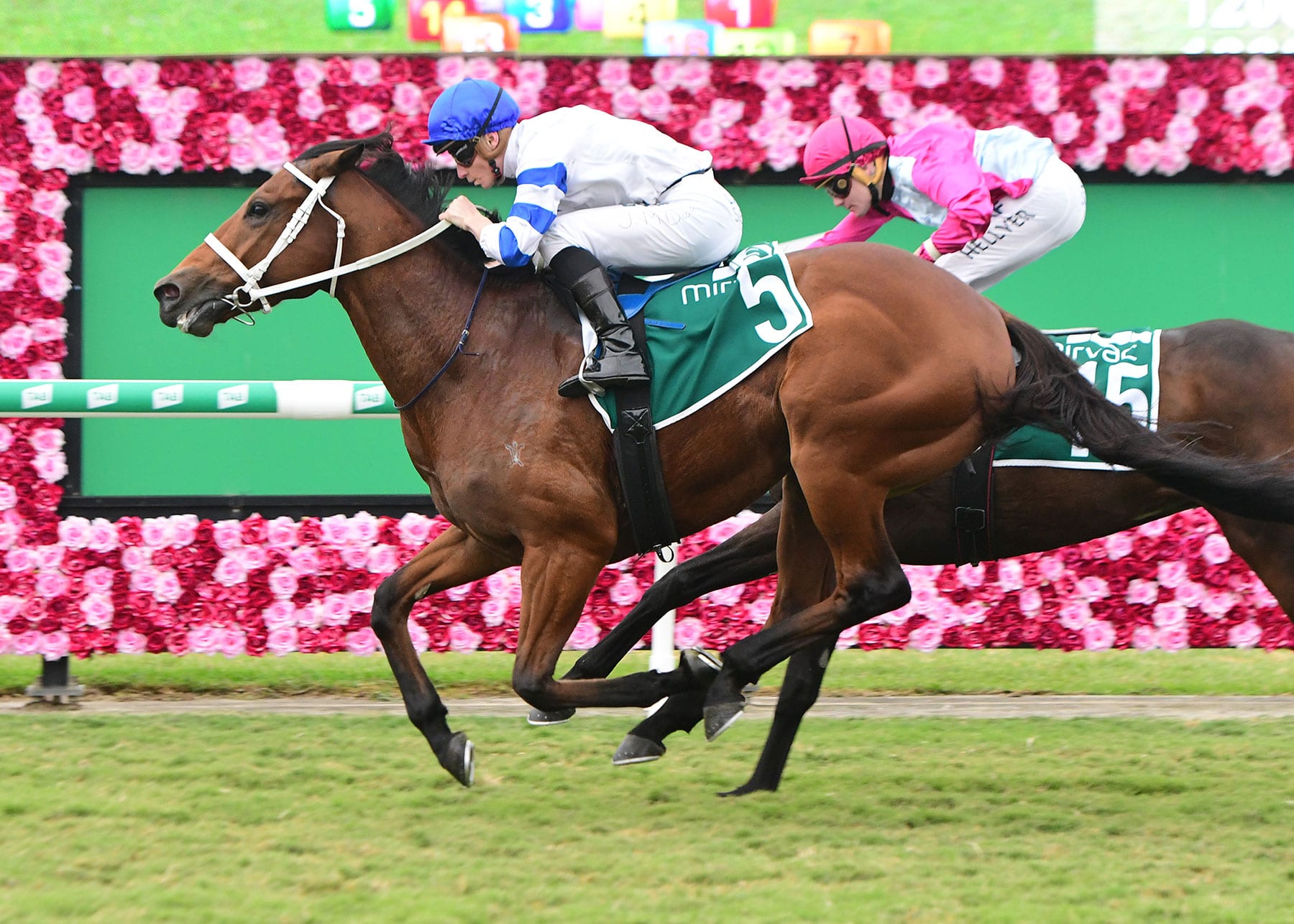 Carrying the same colours as multiple Group 1-winning New Zealand-breds Kermadec and Rangirangdoo, Kolding produced an irresistible surge from fourth-last to beat Baccarat Baby by half a length. Adding to the New Zealand flavour of the result, he was trained and ridden by expats Chris Waller and James McDonald respectively. “I think he’s the right horse to go through to the spring – an Epsom (Group 1, 1600m) type of horse, in my opinion,” Waller said. “He’s owned in the same interests as Rangirangdoo who won that race, and this race looks a good launching pad.”

Kolding has now won five of his 11 starts, including all of his last four since being gelded earlier this year. “It’s been the making of this horse,” Waller said. “Prior to being gelded he had the ability but didn’t want to be a racehorse.” Kolding was bred by Warren Pegg in partnership with Wentwood Grange, who sold him at the 2017 Premier Sale at Karaka for $170,000.

Wentwood Grange’s Hawkins family also bred and sold Kermadec four years earlier. “It’s a fantastic result, and that combination of Guy Mulcaster buying our yearlings and Neville Morgan racing them seems to be working extremely well,” stud manager Dean Hawkins said. “We were so pleased that they decided to come back to the well again after Kermadec, and we’re thrilled that they’ve got this result with this horse. “It was an amazing performance in the Guineas. They’ve always had a big wrap on the horse over there, but he’s really come on in leaps and bounds since he was gelded. To win four in a row, culminating in a Group 2, is great.”

The Wentwood team are delighted to share the accolades with Pegg, who has been involved with the farm since the beginning. “Warren was actually our very first client when Wentwood Grange first got started,” Hawkins said. “A few years ago he decided to stop breeding horses on his own, so we started to breed in partnership with him. “He’s been a wonderful client for such a long time and has become a close family friend. It’s fantastic to share this result with him.”

Kolding is out of Pegg’s Danzero mare Magic Star, who had previously produced two other stakes winners – the Listed Counties 2YO Challenge Stakes (1100m) winner Miss Upstart, and the well- performed stayer Sampson, the winner of 11 races including the Group 2 Awapuni Gold Cup (2000m), Group 3 Trentham Stakes (2100m) and Listed New Zealand St Leger (2600m). A filly by Iffraaj was sold by Wentwood Grange for $150,000 during last year’s Book 1 sale.

Meanwhile, the win was the biggest so far for Waikato Stud’s up-and-coming stallion Ocean Park, who had previously been represented by a further 12 stakes performers including Rondinella, Another Dollar, Mongolianconqueror and Arrogant who were all placed at Group 1 level.

Now with three crops of racing age, Ocean Park has sired 94 winners from 167 runners. He has sired 27 winners in the last two months alone, and he had a double on Saturday as the promising Star Of The Seas scored at Randwick – the sixth win of his 12-start career.