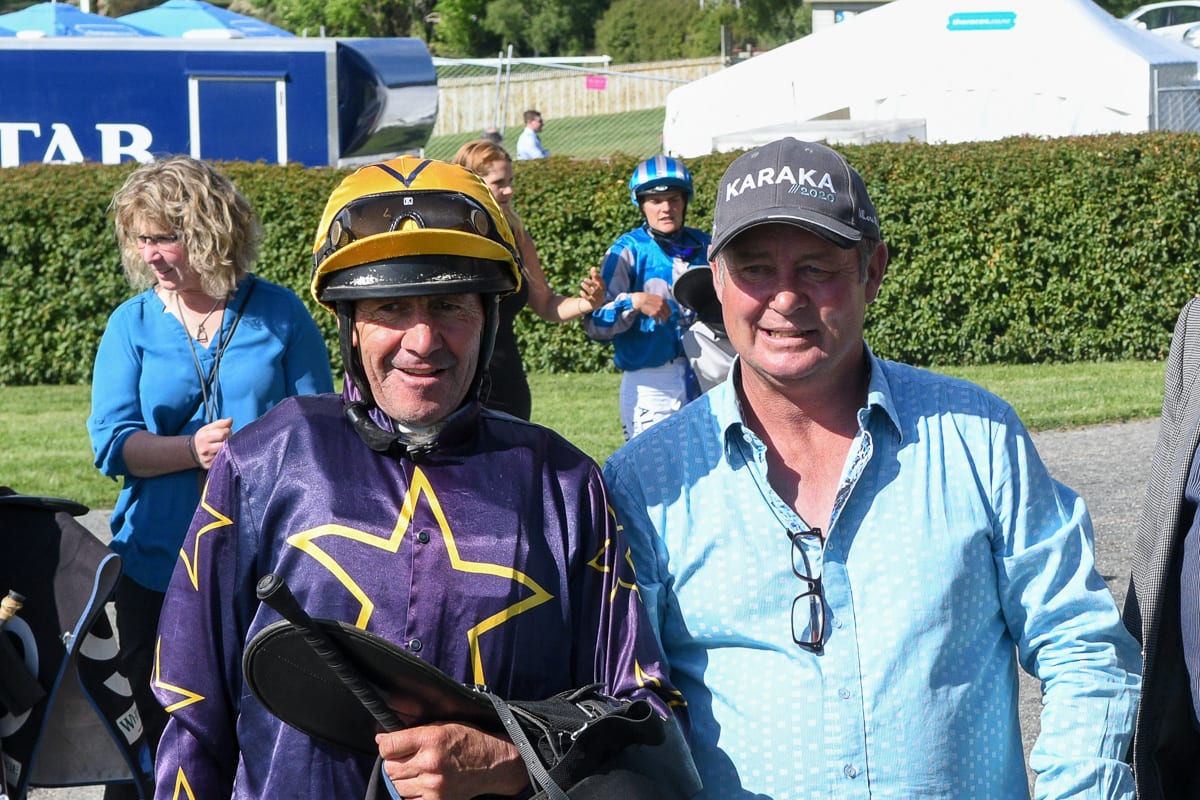 Wingatui trainer Terry Kennedy hopes one of his runners at Ascot Park on Saturday will provide a record-breaking moment for long-time friend Chris Johnson. Heading into Saturday’s eight-race programme, Johnson has a career tally of 2450 victories in New Zealand – one short of the all-time record held by David Walsh.

Johnson has rides in all eight races on Saturday, including the Kennedy-trained runners Back Hut, Secret Sound and Ray’s In Command. Over the two decades since Kennedy switched from riding to training, Johnson has been in the saddle for 47 of his friend’s 182 career winners.

“We’ve known each other since my riding days and we’ve been mates for a very long time,” Kennedy said. “He’s ridden a lot of winners for me over the years. “He’s on a few of my runners this weekend, and hopefully he can break the record on one of mine.”

Both Secret Sound and Ray’s In Command are last-start winners, and Kennedy also likes the chances of three-year-old filly Back Hut in the World Solar Maiden (1400m). Although she has yet to finish closer than fifth in her three-start career, the daughter of Highly Recommended made up a huge amount of ground over 1200m last start. “I think Back Hut can win,” Kennedy said. “She was giving them about 15 lengths at the 600m last time, and she wasn’t beaten by much at the finish. I wouldn’t be surprised to see her go close.”

Secret Sound burst out of the pack with a good turn of foot to win over 1200m at Wingatui on November 3. She tackles the same grade and distance in Saturday’s Shoe Clinic Handicap. “She won with a fair bit in hand last start,” Kennedy said. “She’s put on a bit of weight in between times. There’s some rain in the forecast, which won’t be any problem for her at all.”

Ray’s In Command has won three of his six starts over 1600m, including his most recent appearance at Wingatui last month. Kennedy believes he will be among the key players in Saturday’s Tim Yeo Contracting Handicap (1600m). “He should be a really good chance,” Kennedy said. “It was a very good win last time and he’s done everything right since then. He races on the speed, which is always an advantage down there at Ascot Park.”

Another one worth watching is the Ghibellines mare Anticipate, who will be ridden by Jacob Lowry in the ASM Maiden (1400m). The four-year-old finished strongly for fourth over 1200m last start. “She ran on nicely last start in the same race as Back Hut,” Kennedy said. “She’s gone the right way since that first-up run. But she has drawn out a bit, so she’s going to need a bit of luck.”

Kennedy’s other runners on Saturday are Dream Brave and Countess Ruby in the Group ILT Handicap (2200m), and Havana Heights in the The Edge Handicap (1600m).