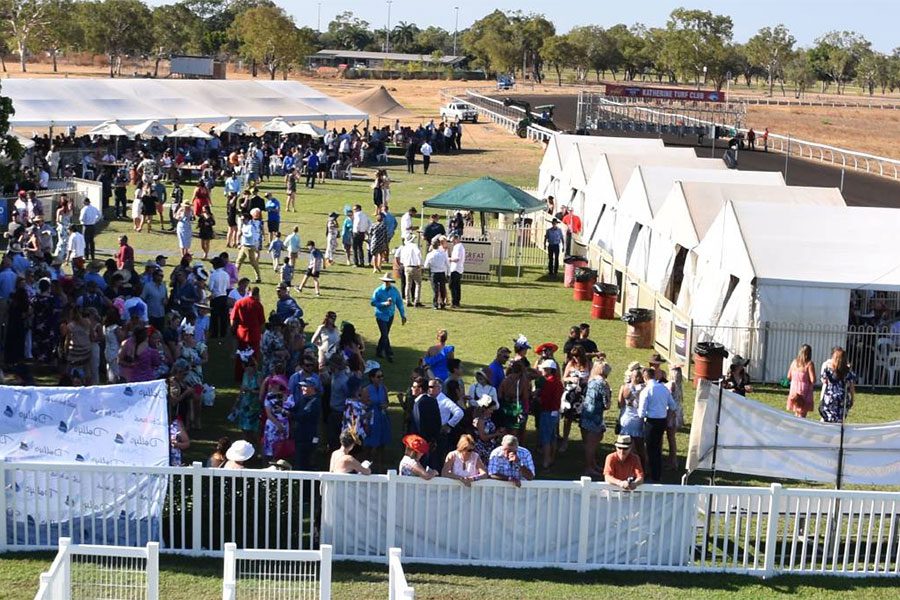 After the hysteria and excitement of the recent Darwin Cup Carnival, the action in the Top End resumes on Saturday with the annual Katherine Cup Day meeting.

Up to 3000 patrons are expected to walk through Jim Jackson Racecourse gates on the weekend.

It’s a nice way for horses that didn’t feature prominently at Fannie Bay during the Darwin Cup Carnival to stretch their legs despite the three-hour trip down the Stuart Highway.

It also gives Alice Springs and interstate trainers a final hit out before the long trip home.

The Gary Clarke-trained Vallabar (Jarrod Todd), who finished third behind stablemate Playoffs in the $200,000 Darwin Cup (2050m) on August 1, is the top weight in the Cup.

The Angela Forster-trained Starouz (Paul Shiers), who won the Tennant Creek Cup (1600m) in May, is also backing up after finishing 10th in the Darwin Cup.

Saccharo (Wayne Davis), a last-start winner for the Phil Cole stable in open company over 1600m on Darwin Cup Day, is also a starter before heading to Queensland for the Birdsville Cup (1600m) in early September.

Vallabar (61kg), Saccharo (60kg) and Starouz (59kg) are the class horses in the field, with Boom Boom Sweet, Just Hang Up and Cowley’s Creek each lumping a luxurious 55kg.

Katherine’s population is roughly 6500 with the Katherine region accommodating 24,000, and Katherine Cup Day is arguably the biggest event of the year in the town.

“Looks like we’ve got some good fields, so hopefully we’ll have a big day.

“It’s great on the day just to see the crowds that turn up and their appreciation, it’s fantastic.

“We’ve gone through the whole pandemic over the last couple of years – it was the only event that happened in Katherine two years ago.

“Between Darwin races and us that was all that went ahead.

“The local county shows and country fairs didn’t go ahead – we lost a lot of things over that period of time.

“It was good to see that thoroughbred racing was able to push through and get it happen so the public had something to do.”

According to Mullins, every year has got a different twist to it when preparing for the once a year race meeting.

“We’ve been happy with the layout we’ve got here and the sponsors that we’ve got are fantastic,” he said.

“What’s new this year is we’ve just re-surfaced the track itself – that’s 1600 ton of new sand.

“We have been working on that for the past six or eight weeks and it’s coming up a treat.

“We’ll see how the trainers and jockeys enjoy the new surface.”

Mullins confirmed that it was an expensive exercise, but with Thoroughbred Racing Northern Territory and the Katherine Turf Club joining forces, that box has now been ticked.

“Between the TRNT, and thanks to them as their support is always great, and ourselves we’ve got it done,” he said.

“Basically this track hasn’t been re-surfaced for about eight or nine years.

“We’ve always done a little bit of patch work here and there, and as you know with the Northern Territory we’ve got the wet and dry seasons.

“You get the wet season and you lose a little bit and then the windy season blows a bit of it around.

“But it is council-owned, so it’s hard for them to have the knowledge on how to look after something on the scale of what we’ve got.

“It’s just a top up really – we were running out of soil, getting down to a very hard fast track, but probably too hard for the horses.

“We’ve just upgraded it and gave it another 80mm all the way around, got a bit of bite in it and should keep everybody happy for the next five years.”

TRNT stewards inspected the track before the re-surfacing took place and they were back in Katherine last Friday to see the completed work – and, according to Mullins, they seemed pretty happy.

Also, Mullins could not speak highly enough of the Katherine Turf Club committee.

“I’ve been involved with the club since 2005, but I’ve been president for the past four years,” he said.

“To prepare for Saturday we’ve focused on fund raising – looking after other sporting groups around the town where we can.

“We’ve got about 25 members and a committee of about six or eight.

“They all have their jobs to do and do it well, so it’s great.”