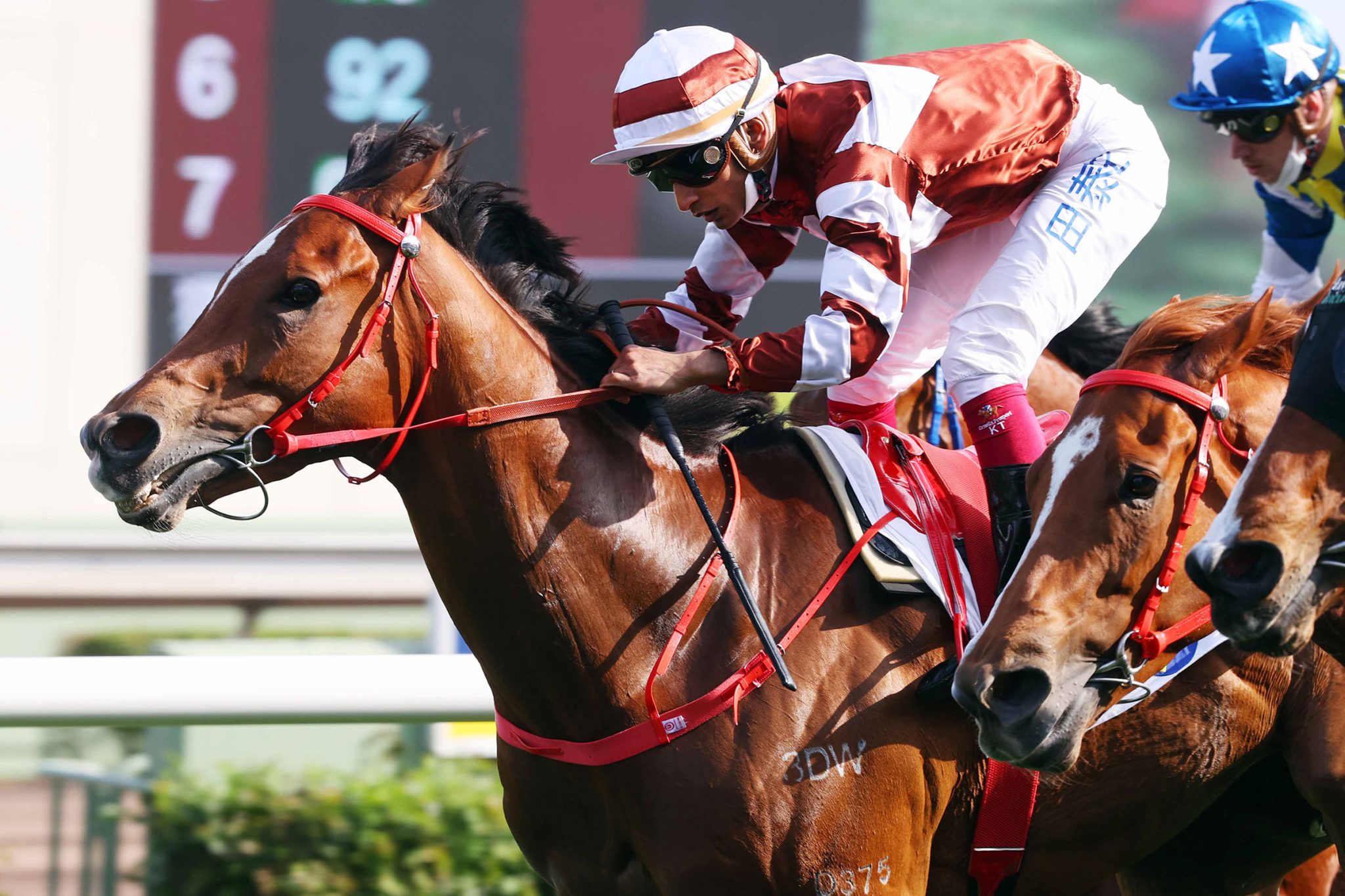 Unleashing a decisive move in quest of a record 12th Hong Kong trainers’ title, John Size stamped familiar mid-season authority on the championship with a treble – highlighted by success in the two Class 1 features – at Sha Tin on Saturday (12 March).

Size’s three-timer with Sight Success, Champion’s Way and Brilliant Way left the Australian with a five-win buffer – 55-50 – over Frankie Lor after 53 of 88 scheduled meetings, while Karis Teetan took riding honours with a quartet.

Teetan and Size combined in unlikely fashion when Sight Success edged to narrow success in the Class 1 Lam Tsuen Handicap (1200m) after the Mauritian contacted Size following the close of entries for the HKD$3.15 million contest in search of a ride.

“I had no ride in the race, I sent John a message after the entry came out and he was like ‘You can ride one for me’ and when you get a ride for Mr Size, they always have a chance,” Teetan said.

“Just glad to pick up this horse and he won this race at the start because he jumped so quick and I got him across and he relaxed pretty quick and, after that, I just had to wait on him in the straight.

“As soon as he balanced up, he started to let the engine open.”

Rising from a mark of 83 at the start of the season to his current rating of 105, Sight Success notched his fourth win of the term, while confirming both quality and versatility. His victories this season have come over 1000m and 1200m at Happy Valley, with a 1200m triumph on Sha Tin’s dirt course preceding Saturday’s first success at Class 1 level.

“He’s won four races this season, he’s been very consistent and he’s always promised to win a good race. Obviously, the handicap helps him out – and that’s what it’s all about. There was probably a neck or so between the first four or five, the competition is there and he happened to be in front on the post. Very competitive race,” Size said.

Carrying 118lb, Sight Success was always prominent before downing a charging Super Wealthy by a neck with Master Eight a short head away in third.

Size was to the fore from the outset when Zac Purton snared the first of the day’s features – the Class 1 Nam Wan Handicap (1600m) – with a supreme tactical display aboard Champion’s Way.

“He drew the right gate (barrier three) and, being a handicap, he was well weighted (120lb). When he flew the gate like he did, he jumped straight on the bit and he travelled with a lot of confidence right from the get-go,” Purton said.

“He was pretty soft in the straight. When he was in front, he was sort of ambling along a bit until I gave him some encouragement and he took off but as soon as I stopped that, he started to stop – so he’s a bit of thinker. He did a good job.”

A son of Hinchinbrook, Champion’s Way won six of his first seven starts in Hong Kong. Victory on Saturday improved his overall record to eight wins from 32 starts with prizemoney of more than HKD$18 million.

“He seemed to enjoy the tempo and he wasn’t interrupted and he wasn’t inconvenienced and everything went perfectly and that’s probably what he needs – I supposed most horses need that,” Size said. “He’s been running well actually but the class is just too strong for him normally.”

“He’s a bit of surprise, this horse, because he’s so relaxed,” Lui said. “He shows very little in the morning on the track and in the parade ring today he was walking around and looked like he was asleep,” Lui said.

“That was a perfect ride, barrier 14, the best example of jockeyship you will see,” Cruz, a champion Hong Kong jockey, said. “It was a very good win.”

“He’s a horse that’s got some ability and I think he’ll be a bit better next season. I think he’s a bit young to be getting tough with him now, but I’ll ask him to go to Class 3 and see what happens,” Size said.

Contesting his 52nd race in Hong Kong, the All Too Hard gelding posted his fifth win in a career stretching back to October, 2017 – when he successfully debuted over Sha Tin’s 1000m course, also under Teetan.

“He’s been an amazing horse, HKD$9 million in stakes money from over 50 starts,” Yiu said. “He hit a bad spot for a while and didn’t really perform for a season or two but when he went to Conghua, he really enjoyed the environment.

“That helped him to recover from some leg problems and we’re now discovering he seems to really like 1000m here, just like he did as a young horse. He’s won a couple over 1000m this season, so we’re really happy with him.”

Teetan continued strong mid-season form, combining successfully with Chris So atop Team Goodluck in the Class 5 Yuen Shin Handicap (1400m) before posting his 46th victory of the season on Cruz’s Super Fortune in the Class 3 Tai Po Kau Handicap (1200m).

Shanghai Dragon, another seven-year-old All Too Hard gelding, claimed the Class 4 Yuen Chau Tsai Handicap (1800m) for Benno Yung and Matthew Poon, marking his fourth victory at Sha Tin – and second over 1800m.