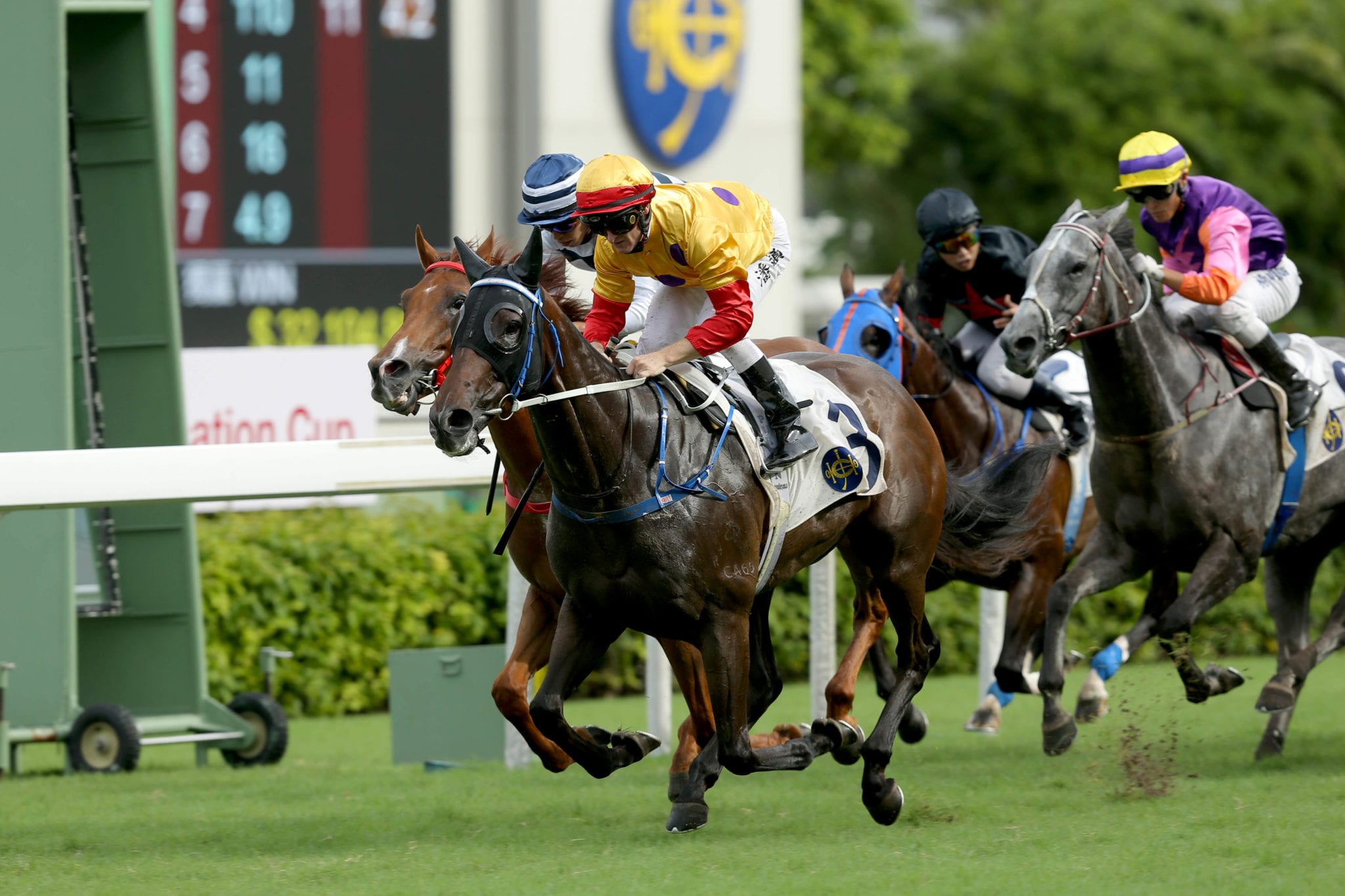 Purton saw title rival Joao Moreira bag a brace that ate into his championship lead in the first half of the card, but hit back in the feature to hold an end-of-day advantage of 138 wins to the Brazilian’s 133.

“Zac and Joao both ride a lot of horses for me and I wish them both the best,” Columbus County’s trainer Caspar Fownes said. “Right now, Zac has the advantage, especially with Joao having a one-meeting suspension coming up next week, but Hong Kong racing is so tough that for both of them to get the number of winners they’ve achieved so far is incredible. “I wish both of them the best; hopefully it can go down to the last day and may the best man win.”

Columbus County belatedly broke his Hong Kong maiden at the seventh attempt, having performed a shade disappointingly when ninth to Golden Sixty in the BMW Hong Kong Derby back in March. Fownes’ four-year-old is only the second horse out of the blue riband to have won a race subsequently, but both handler and rider hold positive expectations for the future.

“He’s typical of PP’s (Privately Purchased horses) coming here on a high rating, they take a bit of time to acclimatise sometimes,” Purton noted. “He didn’t quite measure up in the Derby but he had a nice little break and seems to have come back better. He still feels like hasn’t developed properly so I think there’s more there.”

Fownes echoed the three-time champion jockey’s assessment of the New Zealand import, who ran third in the Group 2 Waikato Guineas (2000m) when known as Sword In Stone. “Going forward, this horse, probably next calendar year, we’ll start to see better things from him,” the trainer said.

“I think he’s a horse that’s going to get to a 110 rating, and he’ll get even further in distance. He’s a nice horse and if he can put on another 40 or 50 pounds in body-weight, then he’ll be well-suited to Hong Kong. He’s been good and raced consistently all season, and I’m sure the summer break will help him a lot to develop further.”

Moreira needed a big day and he struck early aboard the David Hall-trained Red Brick Fighter, the +250 market leader, in the Class 5 World-Class Leadership Handicap (1400m).

He made that two wins aboard Beauty Angel in the Class 4 Serving The Community Handicap (1800m), but with just four of the remaining five race meetings open to him, the difficulty of the task at hand has barely been eased.

Beauty Angel aided Tony Cruz’s cause as he maintained tabs on the top two in the trainers’ premiership, and also led home a timely one-two-three-four of Hong Kong International Sale graduates, with the July auction set for Friday (3 July) night.

The winner cost HK$2.7 million out of the 2019 July Sale; runner-up Circuit Number One, a half-brother to Derby winner Wings Of Eagles, was an HK$11 million purchase out of the March 2018 sale; third-placed Speed Force cost HK$1.1 million from the 2019 July sale; and the fourth home, Eptiwins, was a HK$7.2 million March 2018 auction purchase.

The Frankie Lor-trained Deep Field gelding was more than a cut above his 13 rivals and drew a length and a quarter clear under Vincent Ho in a time of 55.64s.

“He’s even more relaxed now,” Ho said. “Class 3 for sure, even Class 2, won’t be a problem for him, and he can go 1200 metres. But everything depends on how he develops through the off-season but, for sure, he’s a smart horse.

“He’s still very young so that off-season development will be important, just like Golden Sixty last year, and we just don’t know right now, we’ll have to wait and see.”

Ricky Yiu and Francis Lui exchanged the lead in the trainers’ premiership but it was the former who still held sway when racing ended.

Lui nosed past his opponent when the ever-game Thou Shall Sing took race six, but the reticent handler wasn’t singing and that proved wise.

“I still need more winners,” Lui said, and how right he was; at that juncture, the tallies stood at 62 apiece, with Lui enjoying superior second-place countback, but Yiu struck back with the Matthew Chadwick-ridden Precise Express in race nine, the Class 3 Sportsmanship Handicap (1600m).

“It’s hard to ever feel confident because it’s so close and there are a few days still to go but at least I’m getting closer,” Lui added.

Ho drove Thou Shall Sing (130lb) to a neck success in the Class 4 Riding High Together Handicap (1200m), ahead of the Jack Wong-ridden Star Superior (117lb).

“I’ve found that he’s good on the dirt and that’s been the key; he’s one of those horses that have made a difference for the stable this season,” Lui said.

Neil Callan has never been synonymous with the John Size stable but the Irishman pegged a rare victory for the champion trainer – his second all told – in the Class 4 Uncompromising Integrity Handicap (1400m).

Leading Fortune rallied for Callan’s determined urging to edge out the Purton-ridden Triple Triple by a bobbing short-head. His only previous success for the yard, from 45 rides, came aboard Enreaching in February 2017, but 13 of those opportunities have come this year alone.

“John says publicly that Joao (Moreira) has first pick on his horses, so you wait for Joao to make his decision and then the odd one gets dropped down; first of all you hope you don’t have another ride in the race, and then, when you ask John, you hope that he says yes!” Callan observed.

Callan has had two mounts on Leading Fortune with this win following a close second on the four-year-old a couple of weeks ago.

“He’s a nice horse, he’s only lightly-raced and he’s progressing,” the rider said. “When I rode him the time before, I loomed up like I was going to go past them and win two lengths and he just doesn’t really go on with it, he’s a bit timid and a bit green still.

“He kind of did the same thing again today but he loomed up better and that gave me a chance to be able to put my whip down and balance him back up, because he needs a belt to get him going but then he just gets unbalanced and doesn’t know what he’s doing.”

The French-bred Siyouni gelding took his tally to two wins from 10 starts and Callan believes there is more up-side.

“I think he’ll keep progressing because John’s trained him well and hasn’t over-raced him,” he said. “When he goes into next season, he can get further in time – his brain just needs to catch up with his ability – but at the moment 1400 metres is perfect for him.”

“It’s been a fantastic day but I had horses with chances again, and of course that’s most important,” he said, after he steered the Douglas Whyte-trained Falcon Turbo in the Class 3 Guangdong-Hong Kong Cup Handicap (1200m).

“This winner has done it nicely, and thanks to Dougie for giving me support,” Teetan said. “It’s been a top day, we’re towards the end of the season but I’ve still got to have focus right to the end; I hope the winners keep coming and I’m looking forward to next season.

His single-minded approach was evident from the start when the Mauritian teamed with long-time backer Tony Millard in the opener. Yee Cheong Lucky powered away down the straight to take the Class 5 Racing Goes On Handicap (1200m, dirt) by three and a quarter lengths.

Teetan then rated True Legend perfectly from the front and the Frankie Lor-trained gelding had enough in reserve to hold off the attentions of the Moreira-ridden Monkey Jewellery.