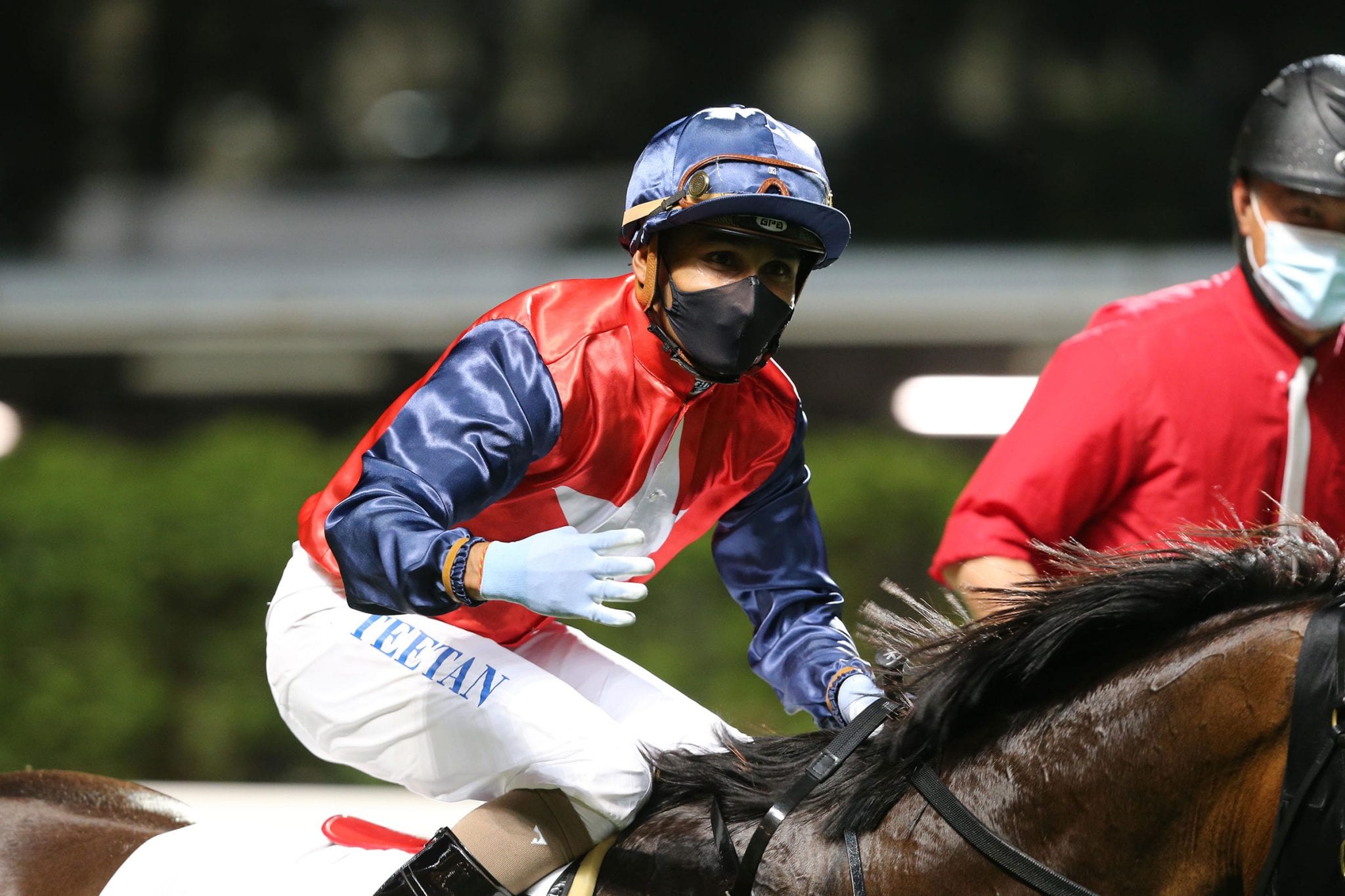 A Karis Teetan late-season cameo highlighted a rain-drenched Happy Valley meeting on Wednesday night (9 June) as the ‘Mauritian Magician’ posted a four-timer while Me Tsui revelled in a treble, crowned by Harmony And Rich’s success in the Class 2 Castle Peak Bay Handicap (1000m).

Teetan dominated proceedings with a double for Tsui (Happy Tango and Telecom Smart), while also teaming with David Hayes (Red Majesty) and Caspar Fownes (Sky Gem) to boost his season’s tally to 72 wins.

Tsui’s decision to tackle Class 2 for the first time with Harmony And Rich was vindicated when the track and distance specialist powered clear under Matthew Chadwick in 56.66s to collect a High Achievement Bonus of HK$1 million in addition to the HK$1.254 million winners’ purse.

The bonus is available to owners of horses with a minimum rating of 80 who win a Class 2 race or above before turning five.

The I Am Invincible four-year-old has won three of his past four starts over the 1000m dash at Happy Valley, each time with Chadwick in the plate.

“He’s surprised me a little bit. I thought he might be a chance, but not win like that. The jockey’s riding manner really helped the horse. He just got going early and didn’t worry about anyone else – the horse really responded to that. It gives the horse confidence,” Tsui said, taking justifiable satisfaction from his first treble since October, 2018.

“It’s really nice – I only get one or two of them a season.”

Matching his quartet at the city circuit on 8 April, and further cementing third place on the jockeys’ championship behind Joao Moreira (138) and Zac Purton (117), Teetan was elated with his midweek haul.

“It’s just one of these nights when things go your way. It’s been a long season – it’s not over yet – but it’s nice to get a four-timer,” he said. “You have to appreciate these nights, they don’t happen often. I appreciate all the support I’ve had from owners and trainers for these opportunities.”

Teetan’s victory on Fownes-trained Sky Gem underlined his soaring confidence as the gelding blitzed his rivals with a two-length win in the Class 5 Yan Chau Tong Handicap (2200m) in class record time of 2m 15.87s.

Starting from gate 12, Teetan unleashed Sky Gem near the 1000m mark with a decisive mid-race move, taking the lead leaving the back straight before careering away.

“We discussed those tactics before the race and they worked out perfectly,” Fownes said. “He was the best stayer in the race but he needed to be ridden that way. He did something similar last year with Vincent (Ho).”

Fownes stretched his advantage over John Size in the battle for the trainers’ championship, edging to a 69-65 advantage with nine meetings left in the season.

Teetan’s ride on Red Majesty from barrier eight, driving purposely to the front before leaving the front straight in the Class 4 Silver Mine Bay Handicap (1650m) was also of the highest ilk after earlier posting a race-to-race brace for Tsui aboard Happy Tango and Telecom Smart in the first and second sections, respectively, of the Class 4 Port Shelter Handicap (1200m).

“Telecom Smart didn’t surprise me because he’s been so consistent,” Tsui said after the Smart Missile gelding ended an exasperating run of three successive runner-up placings to succeed.

“Happy Tango, he’s been racing on the all-weather at Sha Tin and I decided to bring him back to Happy Valley to run on the grass and it worked out well.”

Danny Shum hopes Packing Victory can measure up as a Hong Kong Four-Year-Old Classic Series contender next season after the New Zealand import overcame inexperience and older rivals to post an eye-catching victory in the third section of the Class 4 Port Shelter Handicap (1200m) at Happy Valley on Wednesday (9 June).

Expertly handled by Purton, the Reliable Man gelding justified favouritism to prevail despite racing greenly in the latter stages, prompting Shum to declare the three-year-old a prospective candidate for the Classic Series, a triple-header which culminates in the BMW Hong Kong Derby next March.

“He’s progressively got better all the time, he’s been a thorough professional since he stepped into my stable,” Whyte said after the gelding’s third win from six starts.

“He’s going to have a nice break now. He’s a nice horse and I couldn’t ask for more than what he’s done and I look forward to seeing next season.”