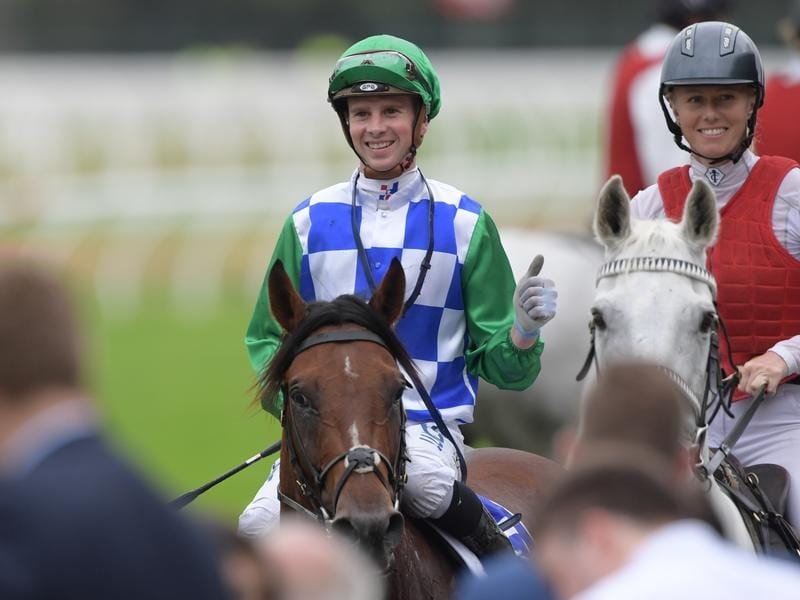 Victorian Fifty Stars has given Jye McNeil his first Sydney winner and confirmed Doncaster Mile credentials with a last-gasp victory in the Group Two Ajax Stakes at Rosehill.

Tom Dabernig, who trains Fifty Stars in partnership with David and Ben Hayes, admitted he was concerned the $2.90 favourite might have left himself too much to do when Mask Of Time and Dyslexic kicked clear at the top of the straight.

But the promising four-year-old dug deep for McNeil and arrived in the nick of time to beat a courageous Mask Of Time ($14) by a neck with Dyslexic ($6.50) another short neck away.

“I must admit, at about the hundred metre mark he looked like he was labouring a little bit but he just needed to balance up and then he hit the line,” Dabernig said.

“He’s a colt and he’s building a good record now, so we’ll probably head towards the Doncaster.

“We’ll see how he pulls up but at this stage it would be the logical plan.

“I thought today he was there to be beaten and he won the race so it was a good effort.”

The Victorian-based McNeil was thrilled to put a run on the board in Sydney and made no secret of the fact he would be keen to stick with Fifty Stars in the $3 million Doncaster Mile (1600m) at Randwick in three weeks.

“My first winner in Sydney and no better way to do it,” McNeil said.

“I think he stays in Sydney and goes on a Doncaster path with a light weight, and off that he has to be in the mix as a good lightweight chance.

“I can ride the weight so I will definitely be putting my hand up.”

While the Doncaster is shaping as the immediate aim for Fifty Stars, Dabernig says the stable hasn’t ruled out taking the horse deeper into the carnival.

If he can hold his form, a clash with Winx in the Queen Elizabeth Stakes (2000m) is a possibility.