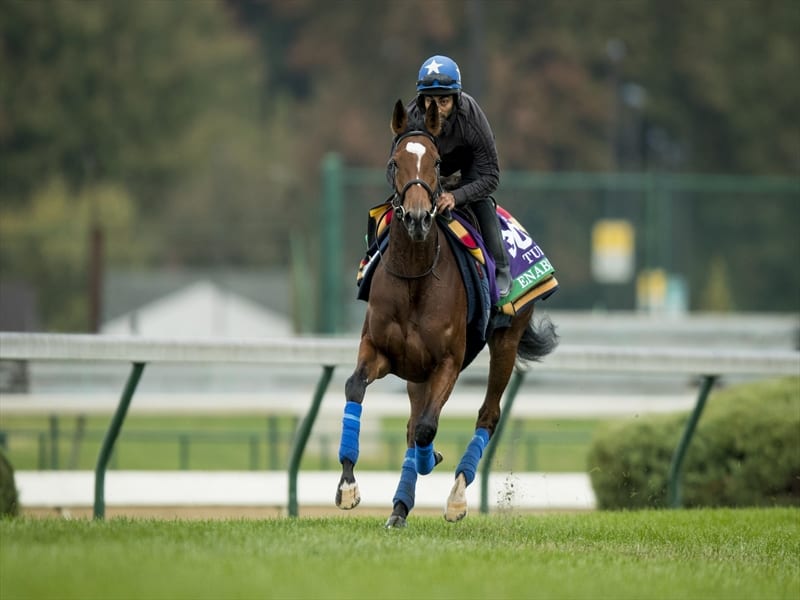 Frankie Dettori believes Enable is primed to defy history and become the first Prix de l’Arc de Triomphe winner to follow up with victory at the Breeders’ Cup meeting.

The four-year-old dual Arc winner runs in the Breeders’ Cup Turf at Churchill Downs in Kentucky on Saturday (Sunday AEDT).

Enable has had a limited campaign following an early-season setback, but was at her best again to claim a second win in the European middle-distance championship in early October.

Her jockey thinks the shortened season can play in favour of the John Gosden-trained Enable as she looks to succeed where the likes of Dancing Brave and others have failed, including the Dettori-ridden Golden Horn.

“I’m aware of the fact that no horse has won an Arc and a Breeders’ Cup Turf, but records are there to be broken,” Dettori said.

“In favour of Enable, she has only raced twice, is very fresh in herself and seems to have travelled over well, and she’s shown her versatility winning around Chester and Epsom and also a King George in soft ground.”

Gosden confirmed he was happy with the way Enable had travelled to Kentucky.

“Enable has settled in well,” he said.

“The rain that is forecast is north of us, so we may not get drowned after all. As expected she took a little longer to come out of the Arc, but she is settling in nicely here.

“She is hydrated, and is both eating and drinking well. To be honest, I would prefer to be here off her campaign of last year, when she was on the crest of a wave, but all the immediate signs are good.

“However, on Saturday she will be running a mile-and-a-half (2400m) round three turns, and that is a different ball game to the Arc. But we are happy as things stand.”

Gosden also has star three-year-old Roaring Lion in Kentucky to run in the Breeders’ Cup Classic on dirt and admits the colt faces a challenge.

Roaring Lion was put through the starting stalls by Frankie Dettori on Wednesday morning as regular jockey Oisin Murphy was making his way from Australia.

“Frankie knows a thing or two about American racing, so it seemed the logical thing to do,” Gosden said.

“I’m happy with the way it went, as I wanted the horse to have experience of the gate before Saturday.

“It is a huge challenge for him, having only won the QEII 11 days ago.”