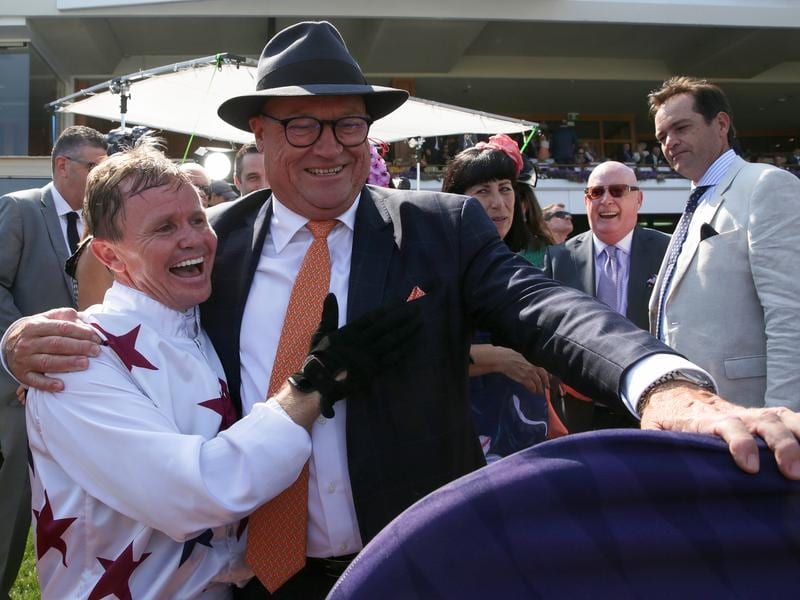 Jockey Barend Vorster has only called Australia home for a week, yet the 42-year-old has already claimed one of the country’s most famous races.

Vorster guided the Tony McEvoy-trained filly Sunlight to victory in the $1.25 million Newmarket Handicap, the time-honoured Group One sprint run on Super Saturday at Flemington.

“Australia is my new home now and what a way to start it off,” Vorster said.

Born in South Africa, Vorster spent the past 15 years riding in Singapore.

He jumped at the chance to begin a new chapter of his life after hearing McEvoy needed a stable jockey in South Australia.

Vorster was the first to send an email asking for the job, McEvoy said.

“I couldn’t spell his name for a start,” McEvoy said.

McEvoy, who had heard of Vorster, looked into the jockey’s riding record, thought “wow” and quickly learned how to spell his name.

“He’s come out here and handled the great occasion. What a great start for him.”

As for Vorster, he knew McEvoy was a good trainer with good horses.

He also knew it was time for a change.

“Singapore has been good to me but I just felt that change was coming, and what a change to have,” Vorster said.

In guiding Harlem to back-to-back Australian Cups, Kah both secured her first victory at Group One level and became the first female jockey to win the $1.5 million weight-for-age race.

“I came over here to seize opportunities, I didn’t expect it so soon,” Kah said.

Hall of Fame trainer David Hayes was overjoyed to give Kah her first Group One and claim his fifth Australian Cup, the second in partnership with his son Ben and nephew Tom Dabernig.

“It was a huge thrill,” Hayes said.