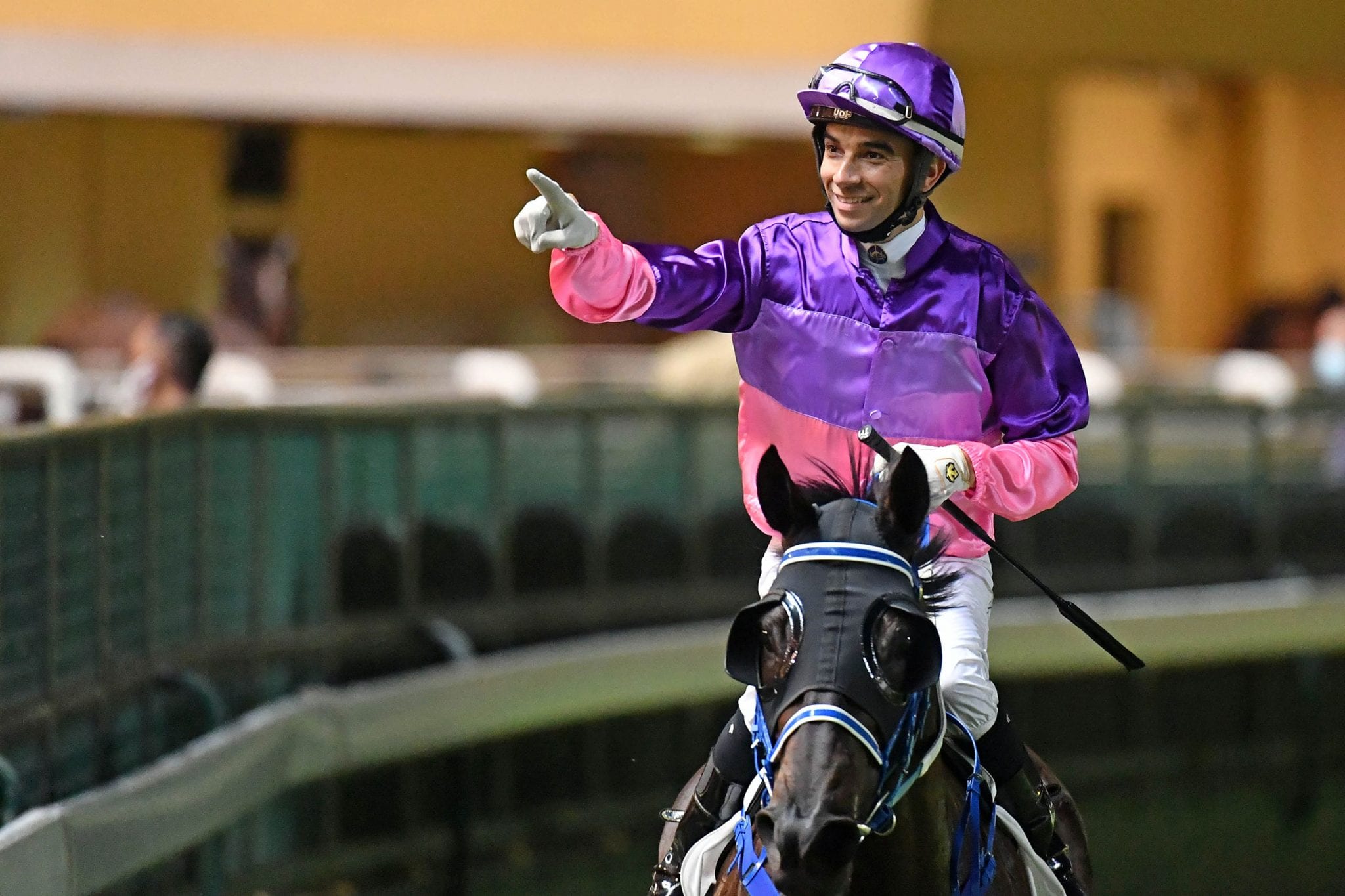 Joao Moreira’s aspirations of securing a fourth Hong Kong jockeys’ championship have soared after the Brazilian notched a five-timer at Happy Valley on Wednesday night (19 May) as defending champion Zac Purton suffered back complaints.

Having watched Purton cut his lead to 13 with victory aboard David Hayes-trained Red Majesty to claim the first race of the night – the second section of the Class 5 Tan Shan River Handicap (1650m) – Moreira put on a clinic, claiming five of the ensuing eight races.

With 15 meetings left in the 2020/21 season, Moreira stretched his lead to 18 – 128 wins to Purton’s 110 – after the Australian suffered back complaints and had to forfeit seven remaining mounts for the program.

Wednesday night’s haul marked the 19th time in seven years – and second time this season – that Moreira has posted five winners at a Hong Kong meeting.

“We don’t get so often these good days, so I’m very happy,” Moreira said, declining to agree with observations the championship battle with Purton is now over.

“I don’t take things for granted and anything can happen and I have to be realistic. The chances of myself are higher, but nothing is for certain yet.”

Purton is hopeful he can overcome his back complaint caused when Red Majesty left the gates in the evening’s opening event to partner Exultant in quest of a third straight Group 1 Standard Chartered Champions & Chater Cup (2400m) at Sha Tin on Sunday (23 May).

The ‘Magic Man’ then guided John Size-trained Rhapsody to a short-head margin in the first section of the Class 4 Shan Pui River Handicap (1200m) before piloting Savvy Kingman to success in the Class 4 Tai Shing Stream Handicap (1650m) for Frankie Lor.

The 2014/15, 2015/16 and 2016/17 champion jockey clinched a quintuplet by steering Tony Cruz’s Transcendent to victory in the first section of the Kam Tin River Handicap (1200m) as Purton reflected on a premature end to his night.

“My horse began awkwardly out of the gate and that pulled me at that point in time and it (his back) just progressively got worse. My lower back went into spasm and all the lower muscles reacted accordingly,” Purton, a four-time Hong Kong champion, said.

“The doctors did all they could. I had the second race off and it’s just not well enough to be able to continue riding tonight.”

Purton has twice previously endured back spasms but remains optimistic he can recover in time to accompany Exultant on Sunday.

“It doesn’t happen regularly. We’re athletes, we’re sportsmen and from time to time it happens.

“Normally it’s a time thing. Sometimes it can take three days to relax (the muscles), sometimes it can 10 days. I’ll know more when I wake up in the morning.

“I’m hopeful of being able to ride on Sunday. The doctors have been good, they’ve given me the right medication and hopefully that helps. If it works, then hopefully I’m there on Sunday.”

Purton received treatment immediately after the first race but, after being assessed by doctors, the Australian was stood down from his remaining seven rides.

Size extended his lead over Caspar Fownes in the trainers’ championship to three wins when Antoine Hamelin led virtually all the way on Ping Hai Galaxy to land the second section of the Class 3 Kam Tin River Handicap (1200m).

Size shared training honours at the Valley with Ferraris, who completed a double when Karis Teetan prevailed on Xiang Bai Qi in the Class 3 Lam Tsuen River Handicap (1800m).

Alexis Badel and David Hall combined with Oversubscribed to land the Class 4 Nam Chung River Handicap (1000m) as Hayes predicted Red Majesty would continue to improve next season after initially struggling on arrival in Hong Kong.

“When the horse came from Lindsay Park, I really thought he would be going up in class, not down in class. He was a classic example of a horse taking time to adjust to Hong Kong but now he’s found his rhythm at the Valley with two wins and a second, he’s had a good season,” Hayes said.

“He seems to have a very good love affair with Zac Purton – he was unplaced nine times, Zac got on – second, win, win.

“He’ll be a horse who goes up in class.”

Hong Kong racing continues at Sha Tin on Sunday (23 May) with the running of the Group 1 Standard Chartered Champions & Chater Cup (2400m).