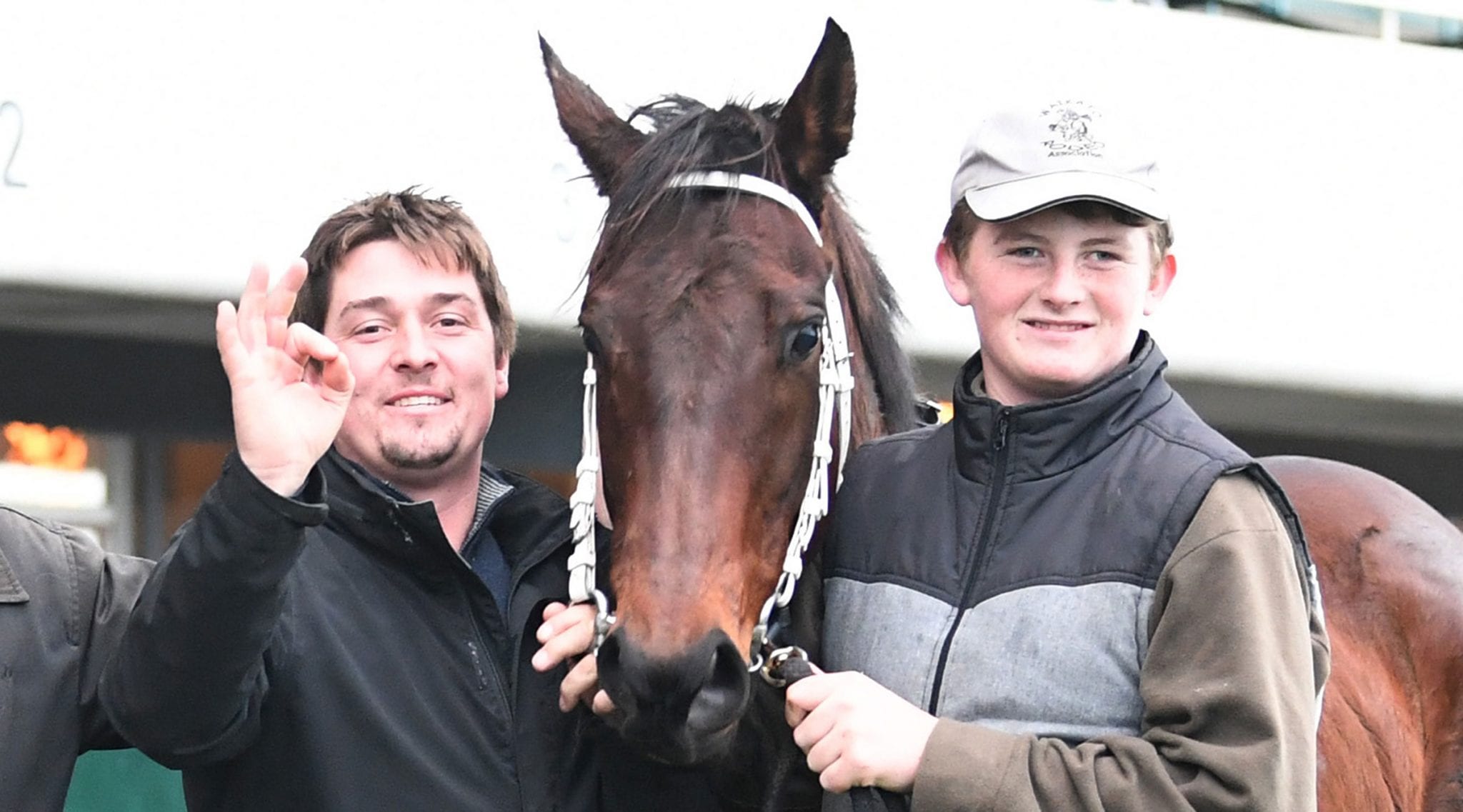 It may have been a wet winters day at Awapuni last Saturday, but that couldn’t dampen the spirits of New Zealand horseman David Jensen who experienced his biggest moment in racing when recording his first win as a trainer.

The victory came courtesy of NZ$2,500 gavelhouse.com purchase Eagle County, who had been knocking on the door of a maiden success for some time.

Jensen, a former jumps jockey, was delighted with the win and said he got a lot more satisfaction from the victory than he did when he was riding.

“It was fantastic, it was better than riding my first winner,” he said.

“She is a gutsy little horse, she always tries. Shane Ellis and I bought her off gavelhouse when she was a three-start mare.

“After COVID they had those 850m races at Wanganui and I thought she was perfect for that and she picked up three placings, so we knew she had a bit of speed.”

The 29-year-old horseman hails from Woodville, a former bastion for Central Districts racing, and was previously the home of notable racing families, featuring names such as Eales, Ropiha, Harris, Baker and Marsh.

The small town didn’t hold much in the way of excitement for a young kid, so Jensen elected to head down to the local track to pick up a bit of pocket money, and from there he was hooked on racing.

“I grew up in Woodville and there wasn’t a lot to do there,” he said. “To make some money I used to go to the stables and muck out and lead horses. When I was 15 I started riding track work and it has gone from there.

“I started riding in amateur races when I was 17 and then I decided to head to Australia where I worked for Danny O’Brien, Michael Kent, and Peter and Grant Dalziel.

“It was a good eye-opener.”

With a dream of becoming a jumps jockey, Jensen returned to his homeland where he picked up a couple of victories over the jumps before weight issues spelt the end of his riding career.

“I came back home and always had a dream of becoming a jumps jockey, and I had always schooled horses, so I thought I would have a go at that,” Jensen said.

“I really knuckled down in 2018 and made sure my weight was right and started going alright, and I rode my first winner at Riverton, Young Pretender, in 2018.

“I struggled with my weight, and I had always broken in horses, so I thought I would make a living doing breaking and have a go at training a few.”

Jensen is enjoying his time as a trainer and said he is able to take advantage of both the Foxton beach and track from his Bainesse base.

“I start everything at home in Bainesse and then Foxton is just down the road, I have got yards there as well,” Jensen said.

“Eagle County does all of her work at the beach.”

While Jensen was delighted with the win, it was also a memorable day for part-owner Shane Ellis of Go With The Flow Racing Stables.

He secured a double on the eight-race card when Carpe Diem took out the 1600m Open Handicap for trainer Brendon McDermott.

The five-year-old gelding had been out of form since winning at Hawke’s Bay on New Year’s Day, and McDermott said a change in training routine has worked wonders.

“I have been mixing it up a little bit,” the Waitarere Beach trainer said. “I had been going to Foxton and then I went back to the beach for a bit. I think the horse just needs a bit of variety, so the last two or three weeks I have been coming into Levin as a change for him.

“I think it changed his whole mindset and all of a sudden he turned it around. He is going well now.”

Up until recently McDermott predominantly trained his own horses, however, he now has the support of a handful of new owners, including Ellis.

“Up until a few years ago I owned most of them myself, so it has been a bit of a struggle all the way through. You get a win, but it (winnings) gets used up with feed and other costs,” McDermott said.

“In the last few years I have got a few owners. Shane Ellis is my main owner and he is really good and supports me.”