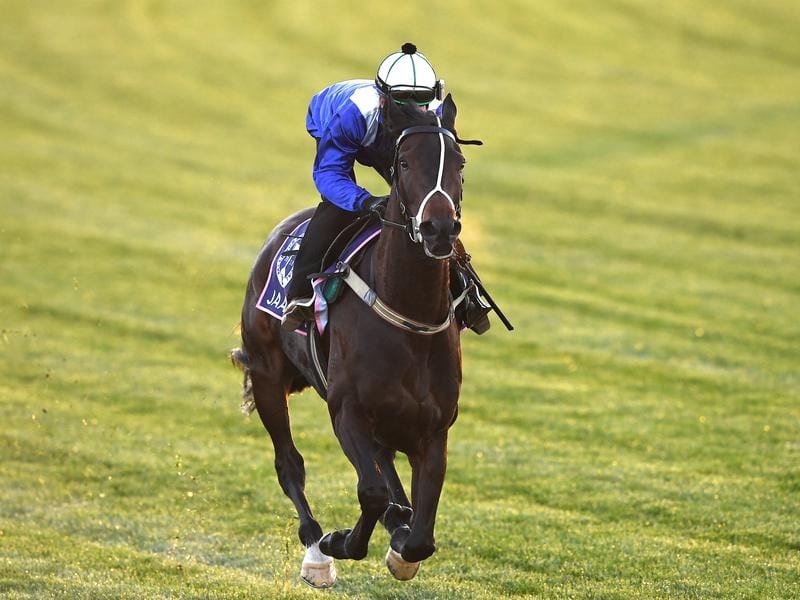 But co-trainers David and Ben Hayes and Tom Dabernig are keen for Jaameh to also force his way into next Tuesday’s race via Saturday’s Group Three Lexus Stakes at Flemington.

Jaameh is chasing the Melbourne Cup ballot exemption on offer to the winner of Saturday’s 2500m race because he sits 43rd in the latest order of entry on just 50kg.

The six-year-old has good Flemington form having won twice over 2500m at the track this spring while last start he tested Avilius in The Bart Cummings (2500m) before going down by a short half-head.

Avilius won an exemption for that victory and is among the leading Melbourne Cup contenders.

Jaameh galloped on the course proper at Flemington on Tuesday morning and Ben Hayes is optimistic the stayer can do the job on Saturday and firm right up in Cup markets.

“I loved his work this morning,” Hayes said.

“He was lovely and relaxed and just got stronger and stronger into his gallop and didn’t do too much.

“I’m hoping that he wins the Lexus and he will definitely be backing up if he pulls up well.

“He’s had a month between runs so he should be able to handle the back-up. He’s a big tough horse so I don’t think it will be an issue.”

Connections have opted to bide their time with Jaameh since The Bart Cummings and wait for Saturday.

“We would have run him in a Geelong Cup or something but he was so low in the ratings he could have won that and we still wouldn’t have got in,” Hayes said.

“The Lexus is automatic entry and he would get in with a light weight. But we’ve got to win the Lexus first.

Jaameh shared the second line of betting on Tuesday at $6 with Brimham Rocks while international visitor A Prince Of Arran was the $4.80 favourite with acceptances on Wednesday.