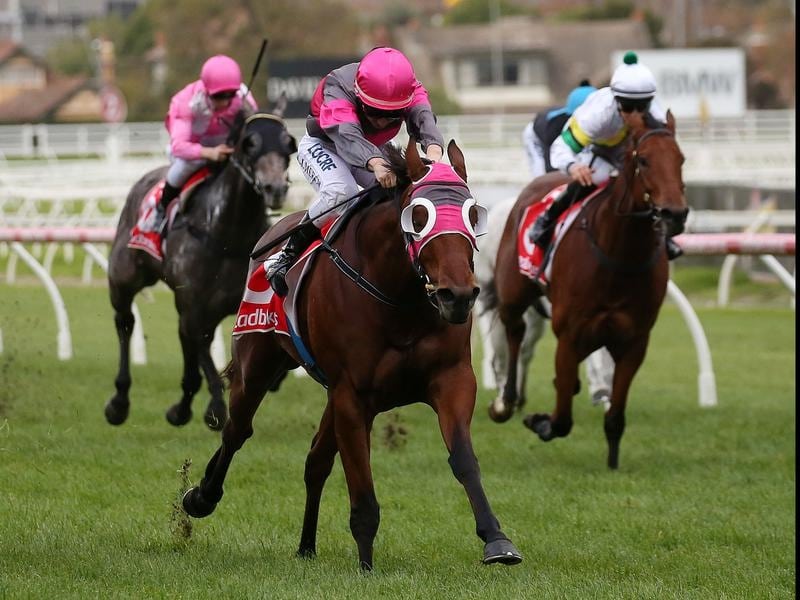 Having risen through the ranks during his unbeaten preparation, in-form sprinter Inn Keeper is set to be tested at stakes level for the first time at Caulfield.

The Symon Wilde-trained Inn Keeper has won seven of his nine starts, including four from four this campaign, and is scheduled to run in Saturday’s Group Three Sir John Monash Stakes (1100m).

Wilde has also nominated the gelding in a 1400m-open handicap as a back-up option.

“He’s a 92-rater now and he’s gone right through the ratings races and then to an open handicap last time down the bottom of the weights,” Wilde said.

“It probably is the next logical step to test him out in stakes company and just see where he is.

“We’re happy with him. He only does what he has to so it will be interesting in this sort of grade where he fits in.”

All Inn Keeper’s wins except for his maiden at Ararat have been on soft or heavy tracks.

Wilde said they were trying to avoid good tracks with Inn Keeper and decided not to accept for last Saturday’s All Victorian Sprint Series Final because he anticipated he would not get his preferred conditions.

“There was a big head wind and he probably would have been up near the front and it also ended up a Good Three by the end of the day, so I think we pulled the right rein,” Wilde said.

“We’ll need a good barrier and a bit of rain.

“I think if he draws well and there’s rain around, that will help him a lot.

“He doesn’t really come in that well under weight-for-age conditions so I think he’ll need everything to be going his way, and I think they’re the two things he’ll need.”

Inn Keeper has won benchmark races at Terang, Warrnambool and Caulfield this preparation before taking out the Golden Topaz at Swan Hill on June 8.

The 16 Monash Stakes nominations are headlined by dual Group One placegetter Voodoo Lad.

Trainer Ciaron Maher has entered Group-winning colt Jukebox to make his return to racing for the first time since his unplaced run in the Group One Coolmore Stud Stakes last November.