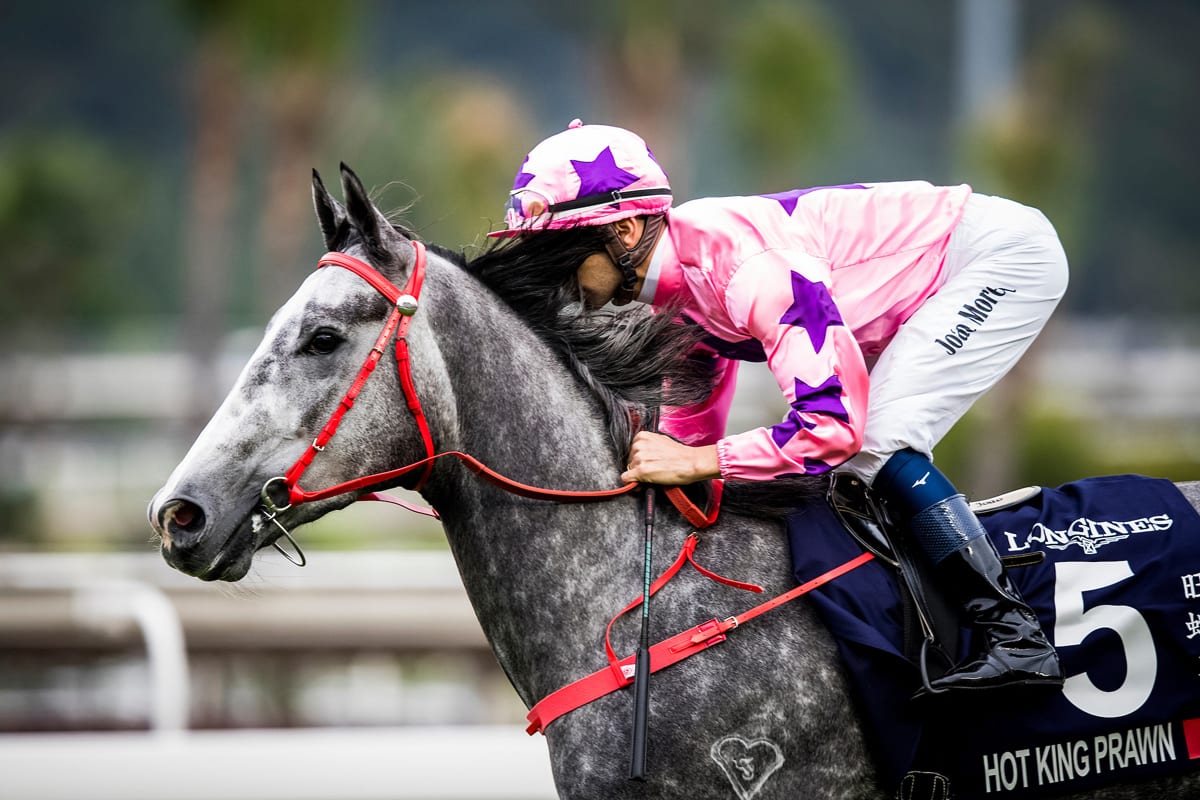 The John Size-trained Hot King Prawn (123lb) is looking to stamp his authority on Hong Kong’s sprint ranks in Sunday’s (5 April) Group 2 Sprint Cup (1200m) at Sha Tin when he faces off against boom three-year-old Aethero (119lb) among a competitive field of eight.

The Denman gelding finished second to stablemate Beat The Clock in last year’s Group 1 LONGINES Hong Kong Sprint (1200m) with Aethero close behind in third. But with Beat The Clock out for the rest of the season, the door has opened for Hot King Prawn to lay claim to the mantle of Hong Kong’s premiere sprinter.

“He’s in good shape and he’s finally showing his maturity and his development – he’s at the right age for these good sprint races and he’s had no interruptions since he started at the beginning of the season,” trainer John Size said, adding, “he’s very strong.”

The five-year-old has come back to peak form this campaign having recovered from a colic surgery early last year. He quashed concerns quickly this season with a first-up second to Aethero in the Group 2 Jockey Club Sprint (1200m) last November, and has since gone from strength-to-strength adding a further three consecutive Group 1 placings to his resume before a Class 1 success last start.

“It’s always a concern – you have to think about their problems and the injuries they have had but he doesn’t seem to have missed a beat this season – he’s been strong all the way through,” Size said.

If successful, the grey will join Mr Stunning (2017) and Beat The Clock (2018) as Size trainees to have won the Sprint Cup since 2012, and a win on Sunday would be Joao Moreira’s third after pairing with both of those past winners. The Brazilian’s mount will break from gate one in the HK$4.25 million sprint.

“He’s more professional now, he’s extremely mature and he’s not a horse that you can expect will do things wrong – he’s definitely one of the best sprinters in town,” Moreira said of Hot King Prawn.

A win for the grey would signal a bright future that connections hope will include victory in the season’s final Group 1 sprint contest, the Chairman’s Sprint Prize (1200m) on FWD Champions Day at the end of this month, but Moreira is taking it one race at a time and is under no illusions that Sunday’s race is going to be anything but a tough test.

“We have to respect Aethero; he’s young, promising and talented, so he deserves the respect but at the same time I’m quite confident about my bloke – he’s a good horse and he deserves to add more great races to his resume,” Moreira said.

Moreira has ridden both horses to victory previously, including a Group 2 score in last season’s Jockey Club Sprint (1200m) for Hot King Prawn and a 1000m course record-setting run aboard Aethero in October, but Sunday’s contest could also bring an external threat to both gallopers as showers are predicted to continue till week’s end.

“I’m not worried about the rain because he has run and won over a wet surface before, he might even benefit from it, so it’s definitely not a concern to me but it might be to other connections,” Moreira said.

Hot King Prawn blitzed his rivals in a recent barrier trial, making all impressively under the three-time champion jockey.

“The circumstances in this race shouldn’t be too bad, he has a good gate and the horse himself seems very healthy – he was comfortable in his trial the other day and in a way that performance had us all very satisfied and we just have to look forward and see how he does it at the races,” he added.

Hot King Prawn is one of three declared runners for Size in the race.

Veteran D B Pin (123lb) will break from gate eight with Grant van Niekerk aboard and the handler signaled that the veteran’s career could come to a close at season’s end.

“He’s had a few interruptions in his career and he’s seven years old so we just have two more races for him and then he’ll retire, but he’s sound, he’s working well, he’s healthy and he’s enjoying his life so hopefully we get through these two races without any mishaps and he can enjoy a happy retirement,” Size said.

D B Pin is a six-time winner across 20 starts since commencing his career in 2016, his peak being a Group 1 success in the 2018 Centenary Sprint Cup (1200m), in which Size trained the first three across the line.

Size also has Full Of Beauty (123lb), who won his first five starts before he tasted defeat last season and returned this term with a Group 3 score in the National Day Cup (1000m).

“He’s been in Group 1 races and there’s no drop in class for him, there’s nowhere else to go as he went up in grade pretty quickly and once he got there he sort of reached his mark, but he’s racing well although he’s just going to find these Group 1 races a bit difficult,” Size said.

The 11-time champion trainer goes in with a three-pronged attack, nearly half the field but directed respect to Aethero – Hot King Prawn and the John Moore-trained three-year-old are one-all against each other.

“Aethero’s obviously the one to beat – he’s remarkable for his age and he’s an outstanding prospect, so he’s going to be very hard to beat in the next two races,” Size said.

The field of eight also consists of Thanks Forever, Mr Stunning, Big Party and Voyage Warrior.