Times change as Beauty Generation and Beat The Clock face-off 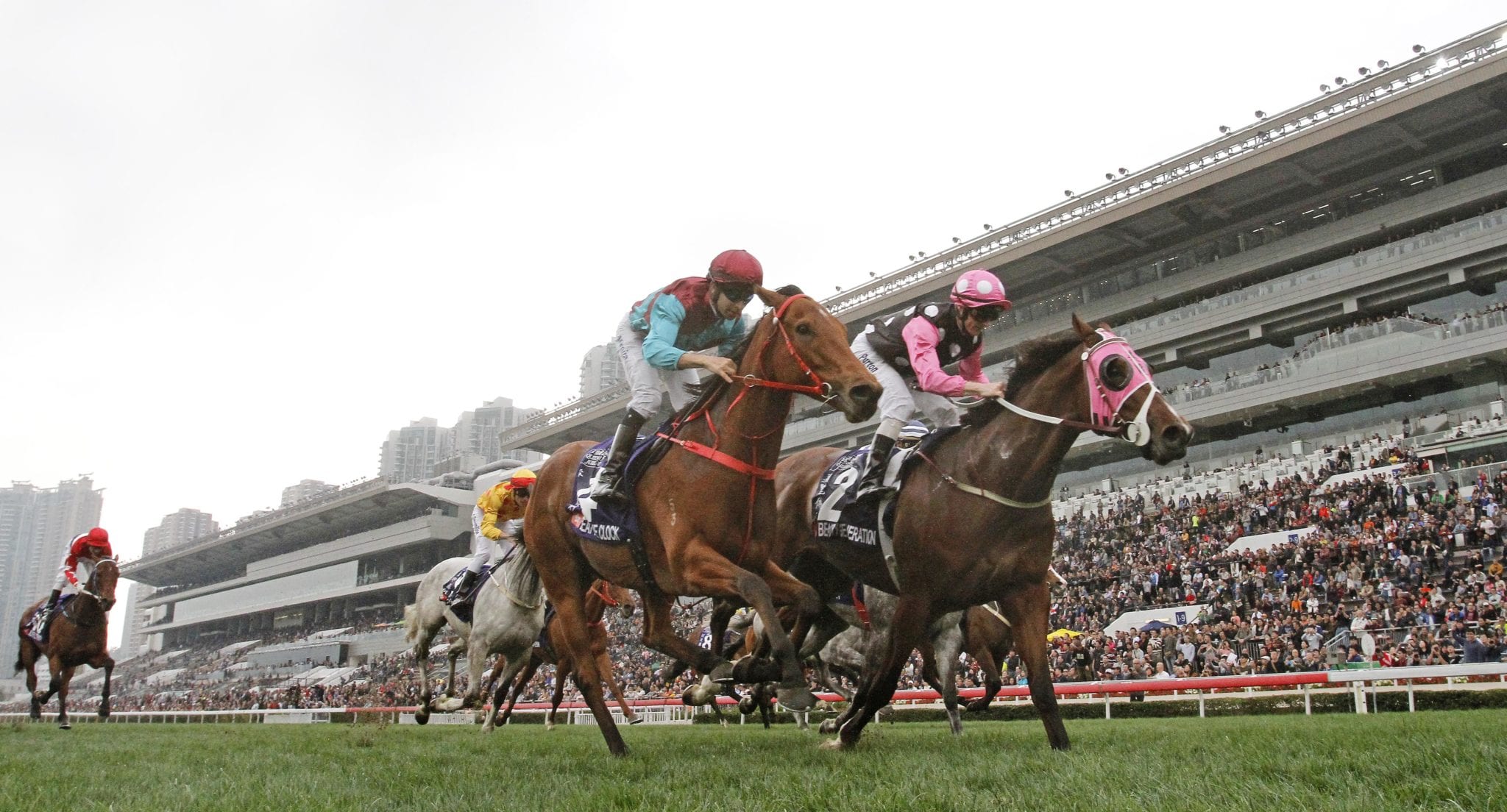 Beauty Generation and Beat The Clock are set to lock horns for a third straight year in Sunday’s (16 February) Group 1 Queen’s Silver Jubilee Cup at Sha Tin, in what again promises to be one of the clashes of the season.

Beat The Clock has had to settle for second behind Hong Kong’s supreme champion both times they have met in the 1400m feature: a head was the difference in 2018, but last year, with Beauty Generation rolling along on a dominant streak, the margin extended to a length and three quarters.

But times change and while Beauty Generation heads into the weekend off four losses, champion sprinter Beat The Clock has back-to-back Group 1 wins immediately behind him.

“Of course he can!” was jockey Joao Moreira’s response when asked if his mount could turn the tables on Beauty Generation this time.

“Beat The Clock is probably going at his very best at the moment. It is going to be a very competitive race and whoever wins is not going to win by a big margin. What my bloke has been doing his last couple of starts gives me confidence; he just knows where the finish line is and he does his best – his form shows that.”

Beat The Clock has finished top three in all 24 of his career starts and landed the Group 1 LONGINES Hong Kong Sprint (1200m) in December as well as last month’s Group 1 Centenary Sprint Cup (1200m).

But Beauty Generation’s trainer John Moore is not short of confidence either, despite the lack of a win for the champion miler since a track record-setting victory in the Group 3 Celebration Cup Handicap at the course and distance in October; the two-time Horse of the Year showed spark when a neck second to Waikuku in the Group 1 Stewards’ Cup (1600m) last time.

“All the ‘scribes’ seem to have Beat The Clock beating him but I always go in on the positive side and I think that he can go in and repeat what he did in his first race this season,” the handler said.

“Taking into consideration the slight downturn in Beauty Generation’s performance of late, I think you’d expect Beat The Clock to be much closer than when they last met – but Beauty Generation is as healthy as I can get him. He’s sound, healthy and he’s going to run a big one again.”

Beauty Generation will drop back to the 1400m at which he has a record of five wins from six runs at Sha Tin. Beat The Clock is three from 10 at the distance, his last 1400m victory being in a Class 2 handicap in June 2017.

“We don’t run at the distance often enough to find out if there’s a weakness there or not. He’s only had two runs at Group 1 at 1400 a year apart and this one’s a year apart also. You don’t really get a guide – we don’t have any evidence or statistics to really support any of the runners at Group 1 at 1400. The sample’s far too small, that’s the problem.”

Zac Purton has no qualms about Beauty Generation going back to 1400m, even though his mount has seemed to lack some of his old powerful dash in his recent races, with Moore looking more towards a step up to 1800m in the Group 1 Dubai Turf at Meydan next month.

“I don’t think coming back in distance is a big problem for him and if the rain happens to hang around I don’t think that’s going to hurt him either,” the champion jockey said.

Moreira, however, believes the possibility of the current wet weather continuing into Sunday could inconvenience some of the runners.

“You have to look at the surface and the rain we’ve been getting because that might affect some horses and not others, so it’s going to make it very interesting,” the Brazilian said.

“Beat The Clock has had more than 20-odd races, some I’m sure he’ll have raced on surfaces that weren’t ideal for him but the amount to which he can overcome a wet track, is that enough to win the race? Nobody knows.”

Whatever the conditions, wet or dry, connections of the ‘big two’ are content with the physical condition of their respective gallopers.

“We jumped him from the gates yesterday morning, just to tweak his mind a bit – that’s quite rare for me to do that with him but he did it easy,” Moore said.

“Everything has gone to plan, he’s a really healthy horse, jumping out of his skin; he’s just in need of a run and I believe by jumping out of the gates and running him down the back yesterday, that will have just switched him on and tweaked his mind to know that he has to jump smartly in the 1400. We’ve tried to get him really switched on to run a big race.

“We’ve let his weight go up a bit in this cold weather, so that will help him in freshening up,” the handler continued. “He’s his old self in that he was sweating up going to the gate yesterday, he was on his toes, he got in the gate and just wanted to jump and run, and he jumped sweetly, so I reckon he’ll be hard to beat on Sunday.”

Moreira feels the same about Beat The Clock, who worked as usual through 400m on Wednesday (12 February) morning in 25.6s.

“He’s in good shape, he’s working well,” the rider said. “When I’m in and out of the Size stable I ask the work riders and the team how he’s doing and they seem to be happy with the horse. I’m happy to have him as my ride and while nothing lasts forever, I’m enjoying it very much.”

Sunday’s feature is not all about Beat The Clock and Beauty Generation, with the seven-runner contest also featuring the Size-trained Hot King Prawn, Moore’s talented Thanks Forever, Ka Ying Star from the Tony Cruz stable and the high-class pair of Wishful Thinker and Rattan for trainer Richard Gibson.

“It’s tough but he’s a live chance, there are two big horses and you need to respect them but he’s going to be very competitive,” jockey Karis Teetan said of his mount, Hot King Prawn.

The grey is untested at 1400m, having won nine of 14 starts at 1000m and 1200m and the stretch in distance is something Size is hopeful about rather than confident.

“We think (it’s a stretch) but we might not be right, he might relish it,” the champion trainer said. “The horse is very kind insofar as his travelling manners in a race. He doesn’t go fiercely even though he started his career as a 1000-metre horse; he’s not the sort of horse that runs hard, even when he first started racing he was quite gentle, so he’ll give himself the opportunity to run the trip.

“It’s not as if he goes a bit too fierce and has to relax – he does that himself. Therefore, if it’s not run quickly enough he might get a chance at getting some prize money.
He’s a 1000-metre winner and normally that doesn’t help you when you get to 1400 and further.”

Teetan has confidence that Hot King Prawn’s relaxed style will see him last the distance.

“I think it should be no problem,” he said. “When he takes a sit I think he’s a better horse, he does hit the line better; I think the 1400 will give him a chance to find his momentum, he could relax a little bit more and I think he’ll be better.”