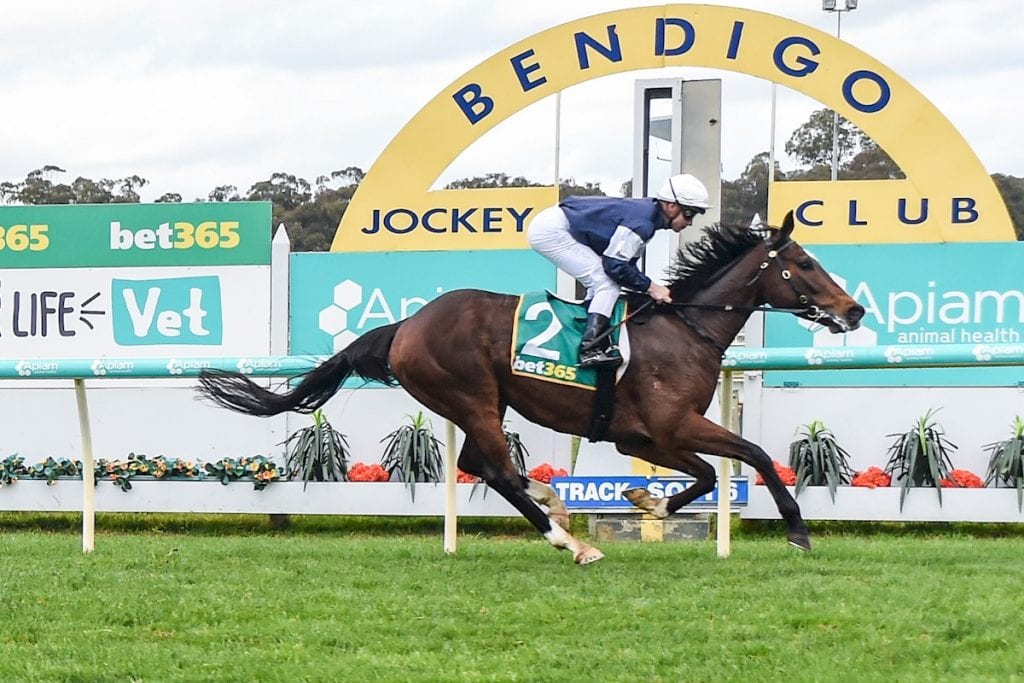 The lightly raced Hosier made it two straight wins since arriving in Australia on Thursday with a four-length victory at Bendigo over 1600m.

Owned by seven-time Melbourne Cup winner Lloyd Williams, the four-year-old gelding is no doubt headed towards some big races in the upcoming Spring Carnival.

The son of Camelot has now had four career starts for two wins as well as a four-length defeat to last year’s Melbourne Cup favourite, Tiger Moth, on debut at Leopardstown and a runner-up performance at Fairyhouse in Ireland before coming to Australia, where he remains undefeated.

After winning his maiden at Bendigo on June 5th by five-and-a-half lengths over 1500m, the Robert Hickmott-trained galloper put up a similar margin in almost identical all-the-way fashion in the fifth race on Thursday.

Ridden by Ben Melham, a hoop who has had success aboard Williams’ runners in the past, he found the front comfortably from barrier eight and was able to give a cheeky glance over his shoulder in the straight as his mount careered away.

The second Australian run for Hosier was more impressive than the first. 👊 pic.twitter.com/m83g8ueS2Z

“He obviously won well the other day,” Melham told Racing.com.

“He looked quite raw in doing so, but he’s taken the next step here today. He sort of did a little work to cross, he had it pretty comfortable when we got there but he let down really well.

“Like I said, he definitely felt more switched on today then what he sort of looked the other day.

“He’s a nice horse with a bright future.”

Hosier is now a +3300 chance in Melbourne Cup betting, but Melham didn’t get too carried away in front of camera.

“So like I said, I was able to use him a little bit.

“He gave me the feel of a horse who’s probably of better quality than here today.

“He feels a lovely horse; he didn’t beat a lot here today so we won’t get carried away yet, but in saying that, he did it in impressive fashion so as long as he keeps improving he’s obviously going to reach higher grades.”

Hosier is not the only four-year-old son of Camelot that has tasted success in Victoria for Team Williams over the past month, with Degraves also having won in his Australian debut at Flemington on June 19th over 1620m.

Degraves had won twice previously in Europe, including a Group 3 win over 1800m, and has form around last year’s Cox Plate runner-up, Armory, which will hold him in good stead over the coming months.

Both gallopers look to have plenty of ability and should only enhance Williams’ Spring Carnival assault.