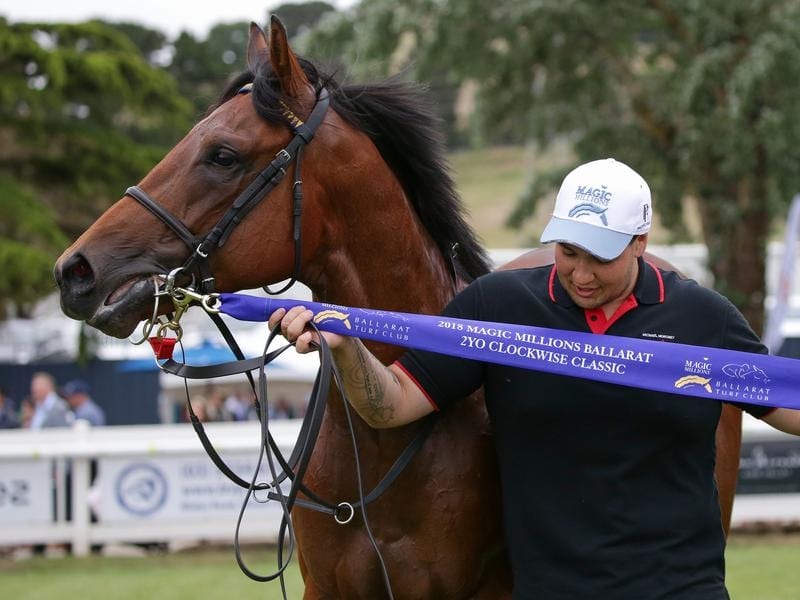 Trainer Mike Moroney has ruled out a Magic Millions Classic tilt for Hawker Hurricane who will instead be aimed towards the Group One Blue Diamond Stakes.

Hawker Hurricane finished strongly to win the $200,000 Ballarat Magic Millions Clockwise Classic (1000m) on debut on November 24 with his stablemate Alburq third after leading for much of the race.

Alburq will be on trial for a trip to the Gold Coast for the $2 million Magic Millions Classic (1200m) on January 12 when he runs in a race for two-year-olds at Moonee Valley later this month.

“Hawker Hurricane has stayed in the paddock and he’s going to be aimed towards the Blue Diamond,” Moroney said.

“He will have about another week out before he comes back in. Alburq has come back in and he’s going to head to a race at Moonee Valley and if he goes well there we’ll put him on a plane and get him to Queensland for the Magic Millions.”

Moroney said Hawker Hurricane would resume in one of the Blue Diamond lead-up races with a view to stamping his claims for the $1.5 million Group One race at Caulfield on February 23.

“He’s a horse that’s going to be better going a little bit further eventually and he is probably good enough to have a crack at the Blue Diamond,” Moroney said.

“The other horse is a real two-year-old type and I don’t mind putting a bit of pressure on and getting to Queensland with him.”