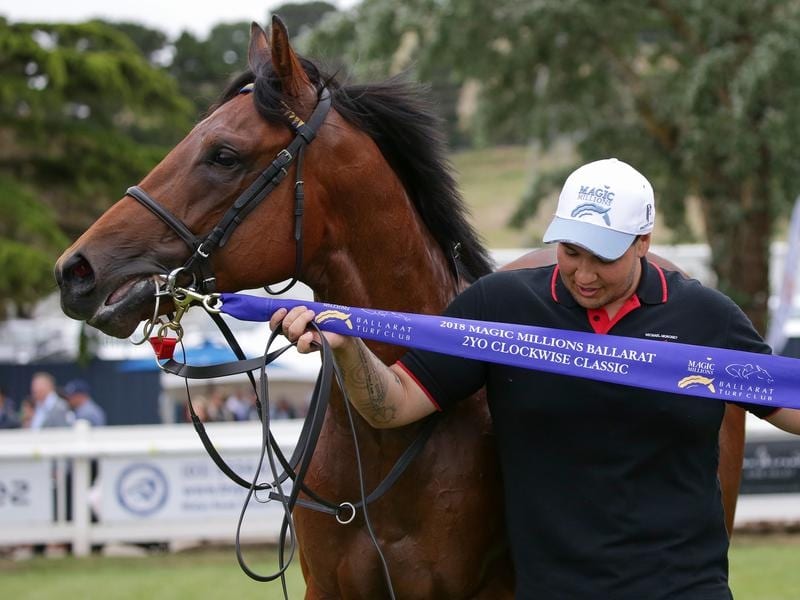 Mike Moroney has yet to confirm plans for debut winner Hawker Hurricane and may bypass the Magic Millions 2YO Classic at the Gold Coast to aim the colt at feature juvenile races later in the season.

Hawker Hurricane won the $200,000 Magic Millions Clockwise Classic (1000m) at Ballarat on debut last Saturday, chasing down stablemate Alburq who led for much of the race before finishing third.

Moroney indicated a decision whether Hawker Hurricane heads to the $2 million Gold Coast race on January 12 was likely in the next 10 days.

“I sent them both to the paddock for a week and we’ll have time just to reflect on everything and just see whether we think it’s the right thing to go up there or not.”

Moroney believes Hawker Hurricane, who finished strongly to win at Ballarat, has the scope to be a player in some of the feature juvenile races later in the season.

“We might just aim towards the Blue Diamond and Golden Slipper and that sort of thing instead.

“It’s just a little bit hard from Melbourne to do it all.

“I’m not saying we’re not going to go. We’re going to make the decision in the next 10 days or so and work out what we’re going to point him towards. And whether we just point Alburq to the Magic Millions.”

Hawker Hurricane is at $15 in first markets on the Magic Millions with Alburq at $26.

The Ciaron Maher and David Eustace-trained Breeders’ Plate winner Dubious is the $8 favourite.

Dubious had an easy barrier trial in Sydney on Tuesday as he continues on a path towards the Gold Coast race.