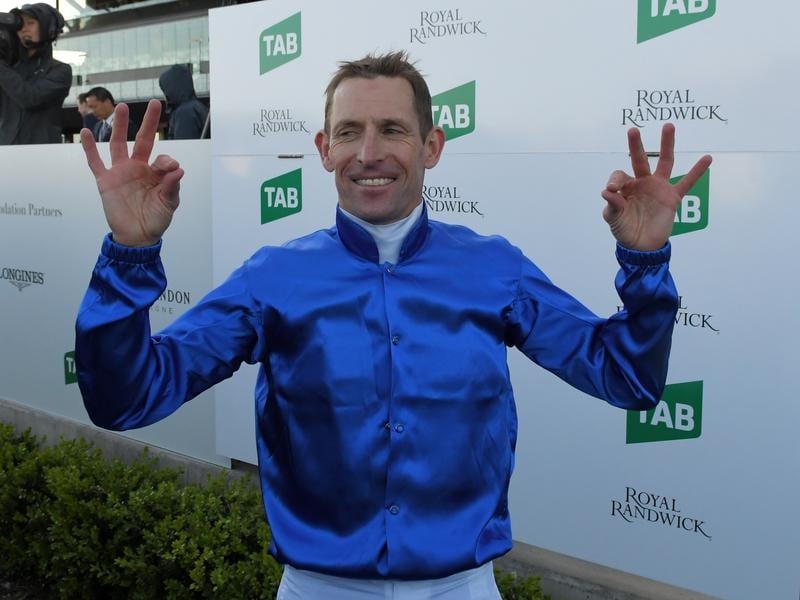 Godolphin stalwart Hartnell has defied top weight and an onslaught of Chris Waller-trained horses to claim the Group One Epsom Handicap over the famous Randwick mile.

It is Hartnell’s fourth Group One win in Australia since he arrived from Europe in four years ago and his second for Godolphin trainer James Cummings with his first two for John O’Shea.

With Hugh Bowman aboard and carrying 57kg, Hartnell ($20) got the better of equal favourite D’Argento ($4.40) by a half head.

The other equal favourite Unforgotten was another three-quarters of a length third with Shillelagh ($26) the next Waller-trained runner home.

Hartnell came to the Epsom after a fourth in the Dato Tan Chin Nam Stakes.

“I thought I had him a fraction big for the Dato Tan Chin Nam Stakes second-up,” James Cummings said.

“I was really, really bullish about the horse running an impressive race then.

“But he would be cherry ripe third-up after that run and I was just convinced it was time to run him in a good race. And it paid off.”

Cummings admitted he felt pressure when he took over from O’Shea, particularly when it came to Hartnell, who clocked 1:32.73 to break the Randwick mile record that has stood since 2004..

“From my perspective, I had a heap of pressure on me to train this horse when I took him over,” he said.

“He’d been winless for a while and he’s won for me every single prep.

“He’s won two Group Ones. He’s won a Group Two. It’s a huge moment and I’m privileged to have a horse of calibre under my care.”

Kementari had also been in Godolphin’s Epsom plans until he was diverted to Melbourne.

“We probably had two horses in the stable that could have won this Epsom, but there’s no more popular winner than Hartnell,” Cummings said.

“It’s a massive team effort. There’s the early mornings, there’s the long walks, the attention to detail and I just can’t thank the staff enough.”

It was also exciting for Bowman who won the race three years ago on Winx but claimed his first at the elite level in the Godolphin blue.

“I know I wear the all blue when I ride Winx but I am very proud to represent Sheikh Mohammed in the Godolphin colours. It’s my first Group One win in them and it really does mean a great deal,” Bowman said.

“I ended up with a really nice run and I was able to work into it. I did see James (McDonald) go through and hit the lead and I thought I am not going to catch that horse (D’Argento) because I know the talent that he has got.

“I didn’t rush. I just let him get organised and I could sense I was going to get to D’Argento and I was surprised I didn’t beat him a bit more comfortably to be honest in the end, but I am just so proud and so excited.”

D’Argento’s narrow defeat in the Star Thoroughbred colours came less than an hour after the purple and white stars also missed by a half head when Fiesta was beaten by Oohood in the Group One Flight Stakes.