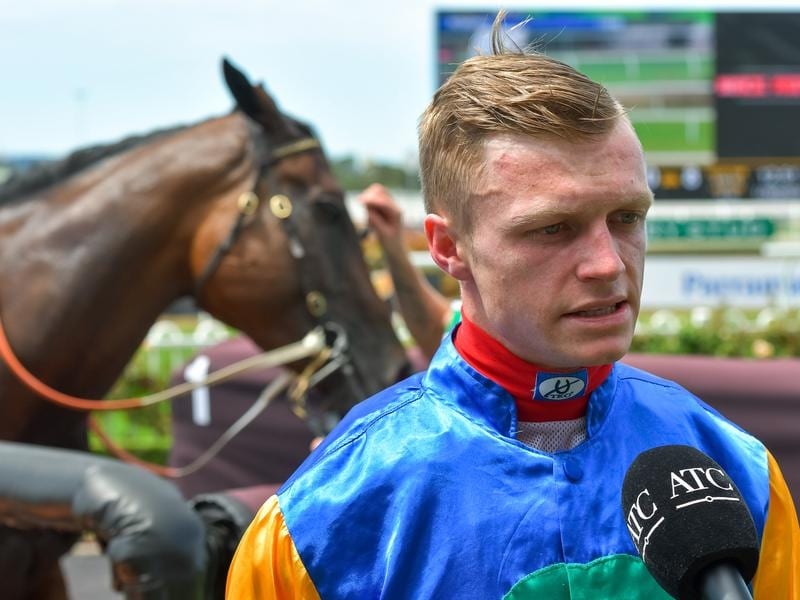 Driving down the Hume Highway from Albury to Euroa has led to apprentice Blaike McDougall riding his first Melbourne metropolitan winner.

Seeing out the last few months of his apprenticeship in Albury, McDougall is making a weekly trip to Lindsay Park to ride work for David and Ben Hayes and Tom Dabernig.

The time spent in the car paid off for the former Sydney apprentice on Monday with the Lindsay Park-trained Prism scoring in the Walk For Phil Handicap at Sandown.

“I had a winner for them at Albury one day and that led to a few more rides,” McDougall said.

“I’ve got a few months left of my apprenticeship and Tom Dabernig said I’d be mad if I didn’t come down and ride a bit of work, so I go down there every Monday.

“I’m thankful for the opportunity.”

Ben Hayes had not met McDougall before Monday’s success and was impressed with how he handled the filly who could now head to Adelaide for the Group One Australasian Oaks at Morphettville on May 4.

Not Enough Effort followed a dominant debut win at Sale last month with an equally impressive performance in the Blue Star Sprint Handicap.

The $3 favourite showed early speed to cross the field in the 1000m scamper and gave his older rivals a galloping lesson in running out a 1-3/4 length winner.

Trainer Sharyn Trolove said she considered missing Monday’s race because of the draw.

“I wasn’t keen on the race as it looked very strong especially when he didn’t have a good gate, but it’s worked out well,” Trolove said.

“I’ve got the mare at home and had two of the brothers,” she said.

“This one’s a very hot-headed horse. I sent him down to Nathan Dunn for a while to do some barrier work and he’s kept getting better from there.”

Another big winner on Monday was Begood Toya Mother who extended his winning sequence to three this campaign with a 6-1/2 length victory in The Big Screen Company Handicap.