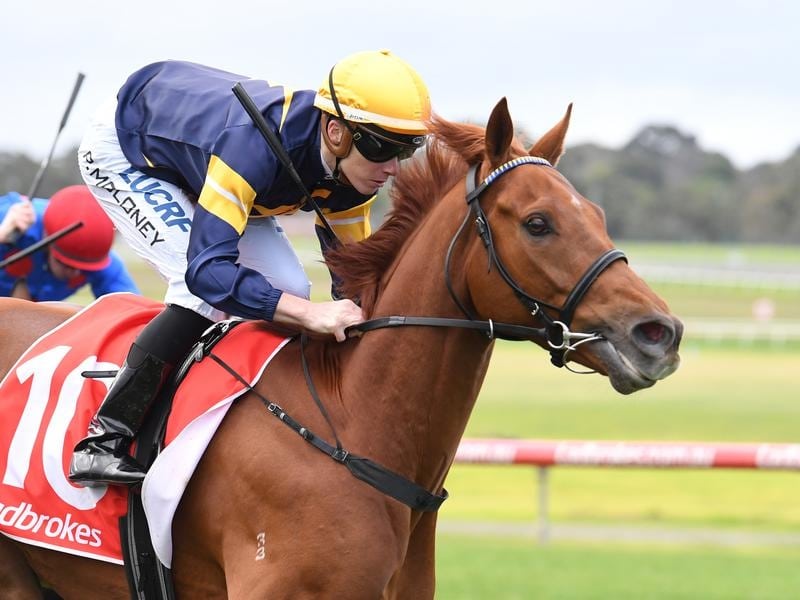 Another midweek race at Sandown is the next step for emerging stayer Hang Man who is a short-priced favourite to continue on his winning way in his first Australian preparation.

The lightly raced Mike Moroney-trained import has three victories from his five starts in Australia, including his past two at Bendigo and Sandown.

The four-year-old sticks to benchmark-78 level and 2400m in Wednesday’s Clanbrooke Racing Handicap after winning by 1-1/2-lengths in the same grade last start.

“He’s a stayer that can relax nicely and he’s got a very good turn of foot for a stayer,” Moroney’s racing manager Anthony Feroce said.

Feroce indicated the plan was to give Hang Man a couple more starts, Wednesday and then Flemington on July 21, before sending him for a spell and looking to the late summer and autumn next year.

“Our plan is hopefully in the autumn he can get to a race like the Mornington Cup, which is a Caulfield Cup ballot-free race,” Feroce said.

“Once again he looks very hard to beat,” Feroce said.

“The field looks like it’s got a bit more depth than last start, and he’s going up a little bit in weight, but it does look another winnable race for him.”

Hang Man’s opposition includes the Matthew Smith-trained import Villardo who steps up to 2400m for the first time in his fourth Australian start.

Villardo was fourth in a 2110m midweek Warwick Farm race last start on a heavy track and Sydney-based Smith preferred Wednesday’s interstate option over a race at Randwick on Saturday.

“He drops five kilos on his last run and he will get a firmer track down there than Randwick on Saturday,” Smith said.

“I think the big track will suit him and the uphill at Sandown will also suit.

“And we’ve got Craig Williams on so I expect him to run a good race.”

The Moroney stable has import Mirimar in Wednesday’s Mypunter.com Handicap, with the four-year-old having his second Australian start after a midfield finish over 1400m at Sale last month.

“He will strip fitter and second-up over 1800 metres is ideal,” Feroce said.

Feroce expects filly Touch A Cloud to appreciate a drop back in distance in the Le Pine Funerals Handicap (1300m).