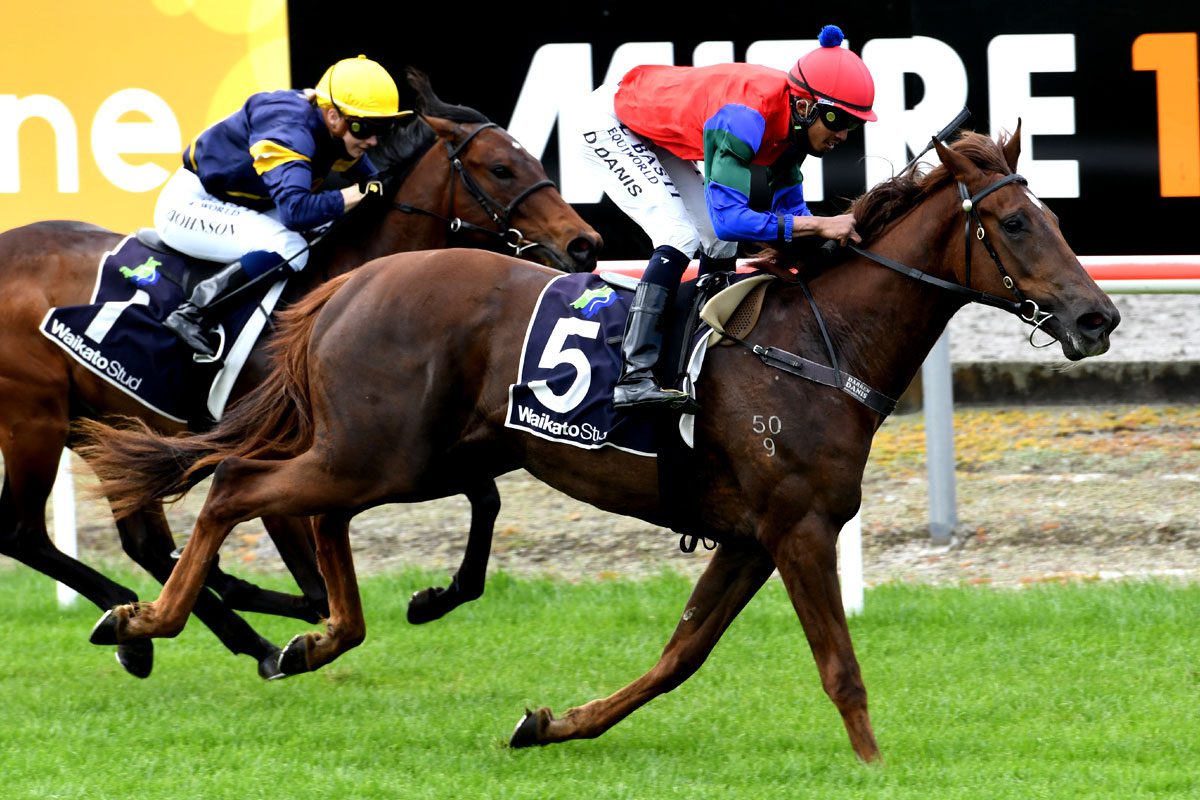 Flashy chestnut filly Gwen Stephani showed she had taken plenty from an unplaced debut run at Whanganui last month when she rocketed home to claim victory at just her second start at Matamata on Saturday.

The two-year-old daughter of El Roca had closed off nicely to finish less than three lengths from the impressive winner Cincoro that day but was largely ignored by punters for her second run, starting at odds of better than +1700 in the seven-horse field.

Rider Darren Danis bounced Gwen Stephani out nicely from the inside barrier but was happy to settle her in third as stablemate Ready To Reign burned to a sizeable early lead in the 1000m contest.

Race favourite Order To Charge, who sat off the leader throughout, took over comfortably early in the run home but was ultimately claimed by Gwen Stephani, who relished the strongly run contest.

Prepared at their Tuhikaramea base by Team Rogerson, Gwen Stephani could be in line for a trip to Christchurch to tackle the Listed Welcome Stakes (1000m) on November 13.

“She has just improved out of sight from Whanganui and I think that first run was a lot better than it looked,” Graeme Rogerson said.

“Her work has been superb and she galloped with one of my other good juveniles in Gibraltar Rising (third at Whanganui) during the week and more than held her own.

“I guess her stablemate helped out today by taking off like she did, which wasn’t the instruction for her, but you had to like the way the winner found the line.

“She’s a very strong filly and I’m going to have to sit down and work out what we do with her.

“I am thinking about taking a couple of the two-year-olds down to Riccarton for the stakes race there, so she is a candidate for that along with Gibraltar Rising.”

Out of the Fusaichi Pegasus mare Shezablonde, the filly is named after platinum blonde Gwen Stefani, former lead vocalist for the band No Doubt.

Rogerson advised that the stable would have a sizeable team heading to the final day of the Hawke’s Bay carnival next Saturday, headed by Group 1 Livamol Classic (2040m) contender Beauden and Group 2 Hawke’s Bay Guineas (1400m) placegetter Drum Major.

“We’ve got a few to take to Hastings next week, including Beauden in the Livamol, while Drum Major will start in the three-year-old 1300m.

“We’ll also have Lowry there for an intermediate staying race and I think he is a real find for the summer staying races.”

Rogerson also confirmed that Group 2 Foxbridge Plate (1200m) winner Mascarpone would be seen next in the Group 3 Sweynesse Stakes (1215m) at Rotorua on October 17.