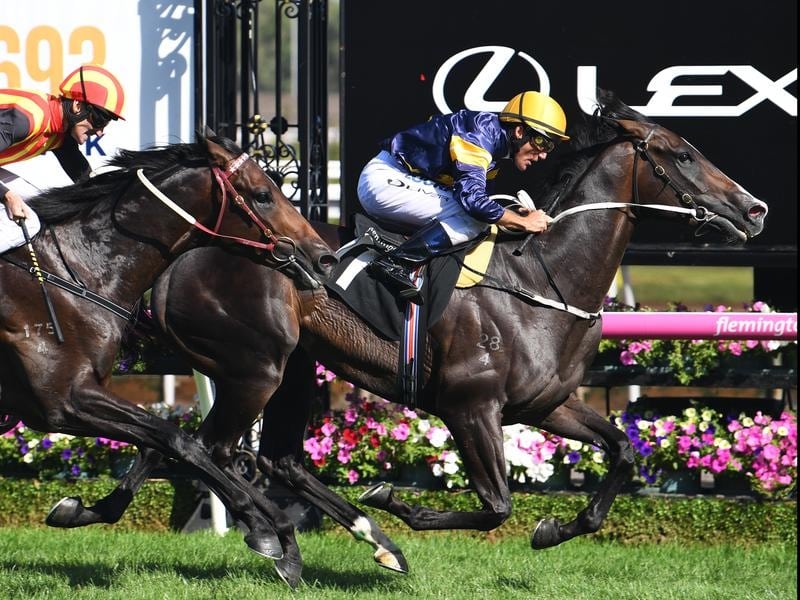 Luke Currie will be the new rider for Grunt when he starts in the Group One Memsie Stakes at Caulfield.

Trainer Mick Price was forced to search for a new rider with Damien Oliver riding Vega Magic on Saturday.

Vega Magic won the Memsie Stakes under Craig Williams last year before running second to Redzel in The Everest, a race he is again chasing this year.

Oliver partnered Grunt in two autumn victories, including the Group One Australian Guineas, and was aboard in the four-year-old’s return run in the P B Lawrence Stakes at Caulfield on August 18, finishing fifth to Showtime.

Price had originally planned to go straight to the Makybe Diva Stakes at Flemington on September 15 with Grunt.

“He pulled up too well and I don’t reckon I could win a tough mile at Flemington four weeks between runs second-up,” Price said.

“He’s a colt and you can’t get the work into him.”

Price said he would be nervous going to Flemington with only trackwork and potentially another trial under Grunt’s belt in that four-week period.

“I think he’s nice and fresh and I’m allowing this 1400-metre race to bring him on for the Makybe Diva,” Price said.

“The other consideration, if he was to fluke winning the Memsie, stick his head out at the right time, it would greatly help his stud career.”

Currie will have a sit on Grunt in a gallop at Caulfield on Tuesday.

Grunt is nominated for the Cox Plate on October 27 for which he is a $26 chance. He is also at $26 for the Caulfield Cup and $51 in the Melbourne Cup.

Nominations for the Caulfield and Melbourne Cups close on Thursday.

Price has elected to save stablemate Mighty Boss for the Dato Tan Chin Nam Stakes at Moonee Valley on Saturday week but has entered Oregon’s Day saying the 1400m suits at this stage of her campaign.

P B Lawrence placegetters Showtime, Hartnell and Widgee Turf are entered as is Hartnell’s Godolphin stablemate Kementari after finishing fourth behind Winx at Randwick last start.

Kementari is also nominated for the Group Two Tramway Stakes (1400m) at Randwick.