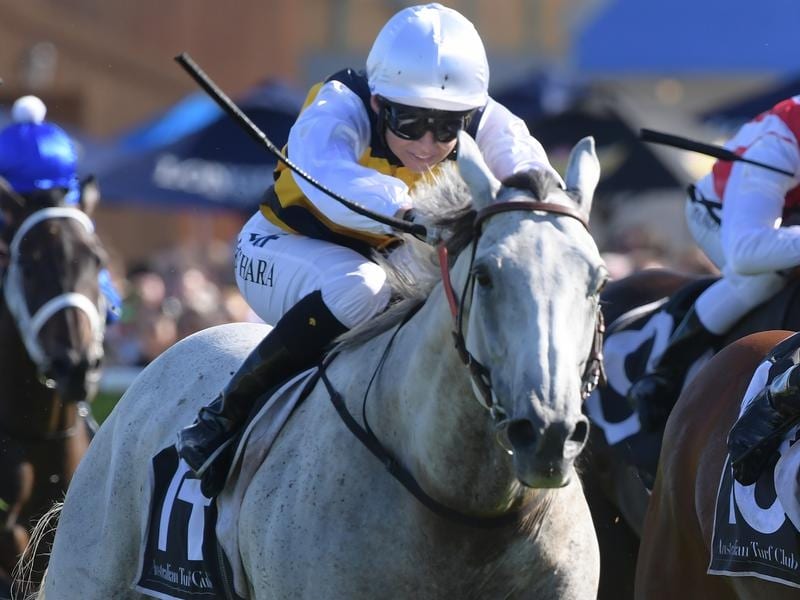 Kathy O’Hara has ridden a Group Three double at Randwick starting with an unexpected opportunity for Godolphin aboard Laburnum replacing an injured Glyn Schofield.

One of two jockeys to fall at Randwick last week, Schofeld is still feeling the effects of a neck injury and was replaced by O’Hara on three-year-old filly Laburnum in Saturday’s J H B Carr Stakes (1400m).

Laburnum was an $11 chance and got the decision by a nose over the $3 favourite Into The Abyss in a driving finish.

“I love the toughness of the filly,” trainer James Cummings said.

“She has been able to sustain the preparation. We’ve got no fear of keeping her in training for longer. We have reaped the rewards for that. She is a Group Three winner now.”

O’Hara admitted she was unsure whether Laburnum had won with the horses wide apart on the track.

“Everyone was spread apart so it was hard to know if she’d won. I was just hoping,” she said.

“I think this is my first win for Godolphin. It was unfortunate for Glyn but lucky for me.”

While Laburnum’s win was close, Grey Lion defied his $41 starting price with a decisive 1-1/4 length victory over Emperor’s Way ($9.50) in the JRA Plate (2000m) after weaving a passage from back in the field.

Originally trained in France, Grey Lion won his first Australian race for Victorian trainer Matt Cumani at Randwick in July after which OTI Racing decided to transfer him to Matthew Smith at Warwick Farm to continue his racing in Sydney.

“Gaps formed and opened up when they needed to. He took the runs and won with something in hand.

Smith was thrilled with Grey Lion who has had one previous start for him when sixth in last month’s Doncaster Prelude.

“Kathy rode for a bit of luck today and she got it,” he said.

“When the breaks came the horse was full of running and it was a good win.”