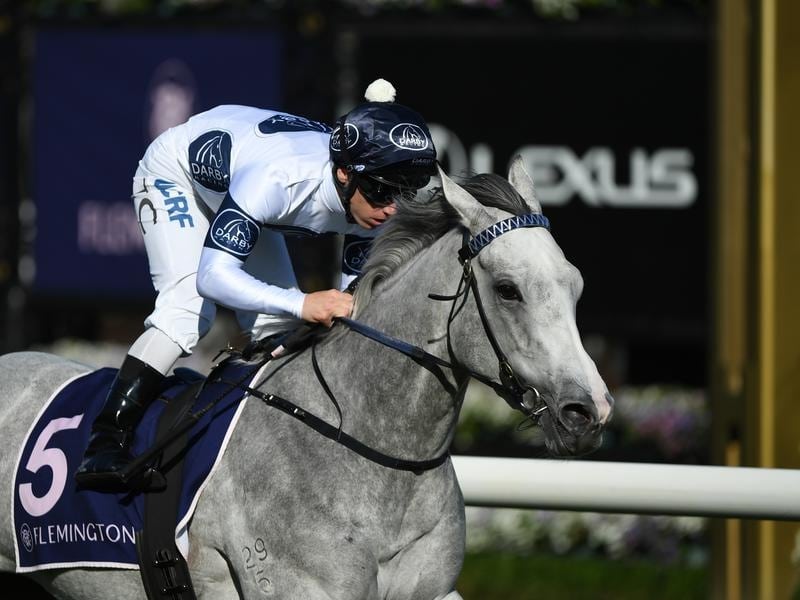 Two young stayers have had their prices slashed for spring Classic races with emphatic victories at Flemington.

Sydney visitor Greysful Glamour shot to the top of the Victoria Oaks market with her win in Wednesday’s Oaks Trial while Savoie was promoted to a $9 second favourite for the Victoria Derby after winning the Derby Trial.

Both three-year-olds raced away from their rivals in their respective 1800m races, one for fillies and one won for colts and geldings, with Greysful Glamour winning by 3-1/4 lengths and Savoire by four lengths.

Sydney jockey Tim Clark justified his decision in coming to Melbourne for the one ride on the Mark Newnham-trained Greysful Glamour.

He hopes the filly can emulate Pinot by winning the corresponding race last year and then snaring the VRC Oaks (2500m) in November.

“I didn’t have much in Sydney today and she’s a horse that I’ve ridden a bit,” Clark said.

“She’s got a ticket into the Oaks now so it was worth coming down.”

Clark has no concerns about Greysful Glamour stretching out in distance.

He said 2000m would be no problems while 2500m could be a different story.

“She rests in a race which is very important for stayers when they’re getting out over a trip,” Clark said.

“She’s got good tactical speed and she can take a position and she was pretty dominate there.

“She’s a tough filly, so it was a good plan by Mark to bring her down and target that race.”

Dean Yendall has ridden Savoie to victory at his past two starts and sees an emerging talent.

He said Savoie was now only starting to learn what racing is about.

“He switches off and is pretty bullet proof,” Yendall said.

“He’s young and immature but is taking everything in his stride and is a pleasure to ride.

“It’s a big step up from a Swan Hill maiden to a Derby Trial.

“All the other horses have had to do the same thing but he took it in his stride and brained them.”