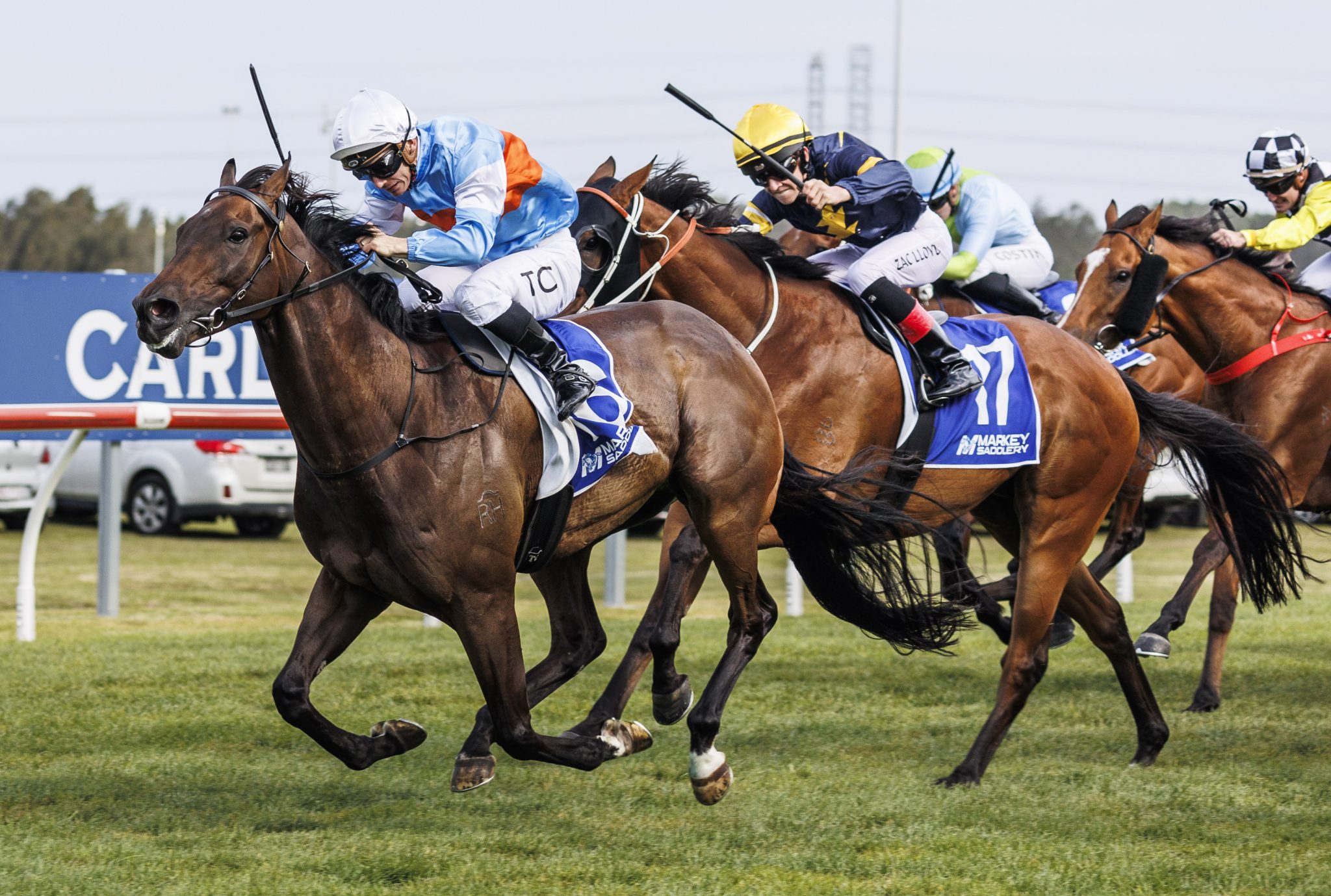 Were it not for a badly-timed injury, Alan Galbraith believes Proisir would probably never have found his way to Rich Hill Stud.

But the accident which halted Proisir’s racing career reaching its full potential gave the farm near Matamata a chance to secure him, and the success of his progeny has been so widespread in the past few months in particular that he’s going to have his book restricted next year.

Galbraith, one of the main partners in Rich Hill Stud along with on-site principals John and Colleen Thompson, gained extra benefit for himself from Proisir’s prepotency on Saturday when Riodini, a horse he races with his wife, daughter and son-in-law, won The Gong (1600m), a $1 million event at Kembla Grange.

Proisir was a very good racehorse at three in Australia, winning his first three starts before twice finishing second at Group One level to Dundeel and third at Group Two level to Pierro and Rebel Dane, but was injured as a late three-year-old.

“They tried to get him back as an older horse after his injury but he didn’t really come back, and we were lucky to get him,” Galbraith said.

“A couple of years had elapsed and the shine had gone off him, otherwise, given what it costs to buy stallions out of Australia, we would never have got him.

“It’s timing and good luck and bad luck at times with horses, and this time it worked out for us.”

Proisir’s outstanding season, plus the performances in previous seasons of horses such as Levante and Dark Destroyer, have made him one of the most in-demand stallions in New Zealand given his fee of $17,500 plus GST – almost too much so, Galbraith said.

“He’ll serve 180 this year. I think if we had our time again we’d have cut the size of his book back,” he said.

“I saw him down there the other day, he’s doing fine, but he’ll have a reduced book and a higher service fee next year.

“But he’s also only just started getting better mares now, so he will kick on further.”

Many of Proisir’s best performers have been trained in New Zealand, and Galbraith said Riodini’s victory would add an extra boost to the sire’s stocks overseas. While he has rocketed clear at the head of the sire standings in New Zealand, he has been represented by just 34 runners in Australia this season and is 65th on the Australian General Sires’ table, which is headed by Savabeel.

“Because he was at a modest service fee he wasn’t getting horses into Australia, so for Riodini to be doing well over there is very good for him and his profile over there,” Galbraith said.

Proisir had four horses go through the ring at last week’s New Zealand Bloodstock Ready to Run sale. Three of them sold at an average of $113,000, including a gelding out of Wentwood Parade that was sold to Hong Kong for $200,000.

The catalogue for the upcoming New Zealand Bloodstock National Yearling Sale series will be released within 24 hours, and the good news is buyers can expect a good selection of yearlings by the in-demand sire, with Proisir represented by 19 yearlings in Book 1 and his 30 offspring in Book 2 will ensure the Karaka sale ring is vibrant right until the end.

Riodini is a horse bred from a family Galbraith has cultivated for three generations. He bought the gelding’s third dam Echo Lass after she had begun her breeding career, with Riodini’s second dam Biennale one of the first horses he bred from the mare.

“It’s not the flashest family in the stud book by any means, but they’ve all been able to run. There’s been a lot of winners from the family.”

Trainers Gai Waterhouse and Adrian Bott set Riodini specifically for this $1 million event, and he scorched home in track-record time despite being wide for most of the journey.

“It’s not the most prestigious race we’ve won as owners – we’ve won good races with horses like Pravda, Frenetic, and Arletty – but in dollar terms it’s the biggest win I’ve had,” Galbraith said.

“It’s great because he’s really suffered from the wet tracks over there, which he hates. His rating slipped back a bit as a result, so much that he nearly didn’t make the field.

“If he hadn’t run well we probably would have brought him back to New Zealand, because once their rating goes down a bit there are so many good horses that it’s hard to get it back up.”

Weather permitting, Riodini will likely run next in the A$2 million Gr.2 Ingham Stakes (1600m), formerly the Villiers Stakes, on December 10.