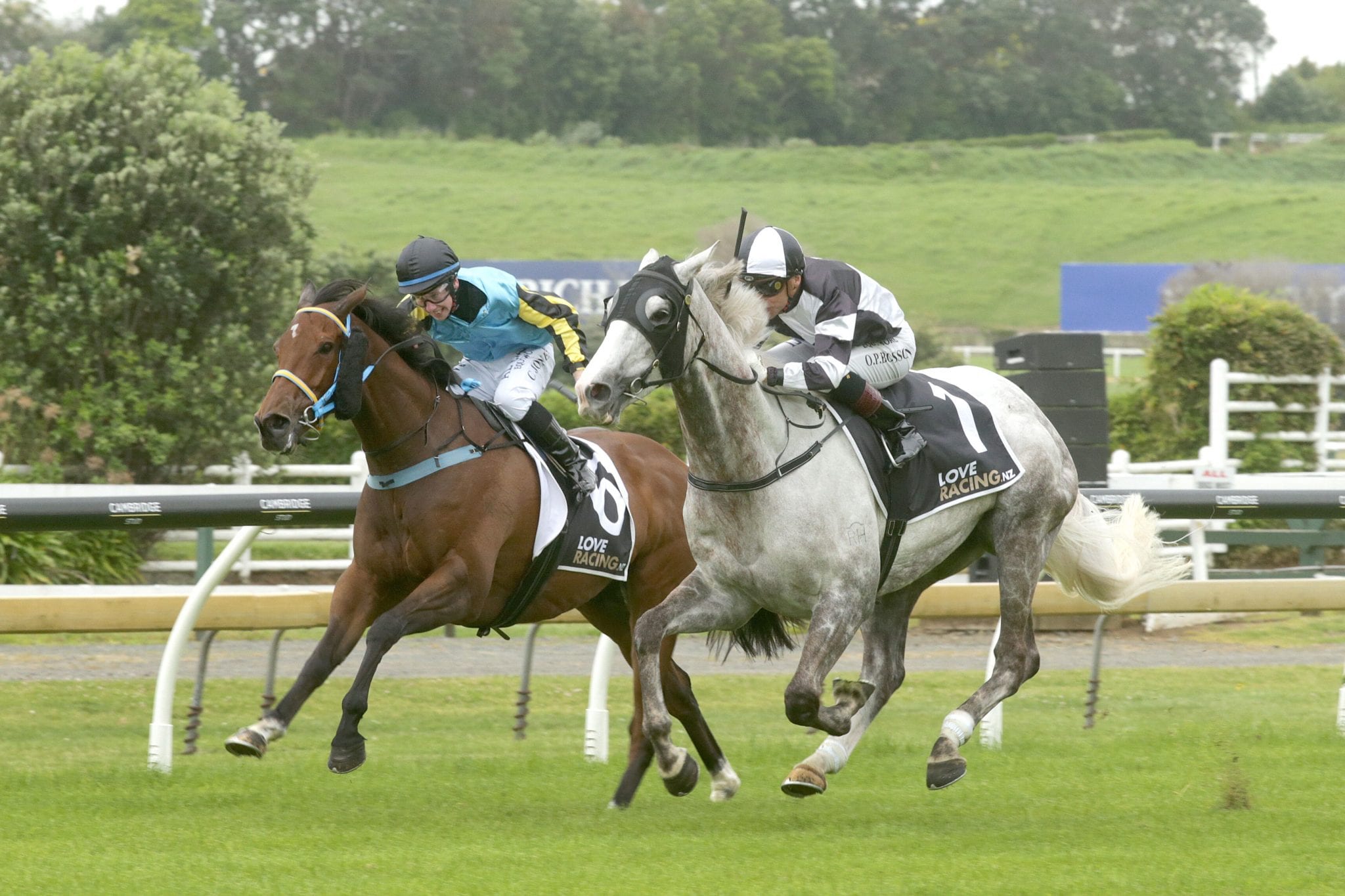 Cambridge trainers Emma-Lee and David Browne have a nice stayer on their hands, with Gone West calling on his stamina reserves under a well-timed Opie Bosson ride when winning the Blue Bubble Taxis 2100 at Ellerslie on Tuesday.

The four-year-old gelding had previously shown his staying prowess when successful at Tauranga in mid-October on a slow surface and handled the Good3 at Ellerslie with aplomb. “He has done really well to back up again today, coming from mid-week company to premier day racing,” Emma-Lee Browne said. “We were very happy with the way he did it. I always thought he would be better on a good track.”

The grey son of Reliable Man relished the solid tempo set by eventual runner-up Casio, who had a five-length lead rounding the home turn but was worn down in the final furlong by Gone West. “He is a big-striding horse, so the stop-start races do sort of knock him a little bit but he is becoming more tractable, the more he learns, so we’re hoping that he can overcome those sort of things,” Browne said.

“We will probably space out his races a little bit now. He is quite a big horse and he is probably still a year away from being fully developed, so we will space it out and see how he comes through today. “He is the kind of horse that you would like to think could be in the Cups races later in his career.”

Browne was delighted to link with gun rider Opie Bosson, who has ridden plenty of winners for the stable over the years. “We have been fortunate to be able to get him on some of our horses. He has always been a jockey that we have had plenty of admiration for and right from when I got Leica Guv to train in my own right, and he rode him for us, we have had quite a good association with him,” Browne said.

Although the Brownes prepared a quality daughter of Reliable Man in Belle du Nord, a Group 2 winner and twice Group 1 placed, that wasn’t the telling factor in identifying the staying prospect out of the Zabeel mare Pravda from the Rich Hill Stud draft at Karaka.

“To be honest, the credit goes to Natalie Young, who is a very good friend,” Browne said. “I was walking out of the sales and she said ‘you’ve got to go and have a look at this horse’. “Sure enough, I went around and pretty much looked at him on her say so and she knows how to pick out a good one. Natalie is pretty good at her shopping.”

Browne is now looking forward to another progressive stayer, to be ridden by Opie Bosson, stepping out at Avondale on Wednesday, with last-start winner Landgrave contesting the Westbrook Vine & Wine Club (2100m).

“He won a highweight last start, but that was more because the programming was right,” Browne said. “He is a really nice horse, obviously winning at his second start. He is a nice stayer that seems to have come on well from his win, so we’re hoping that the Opie factor can strike again.”