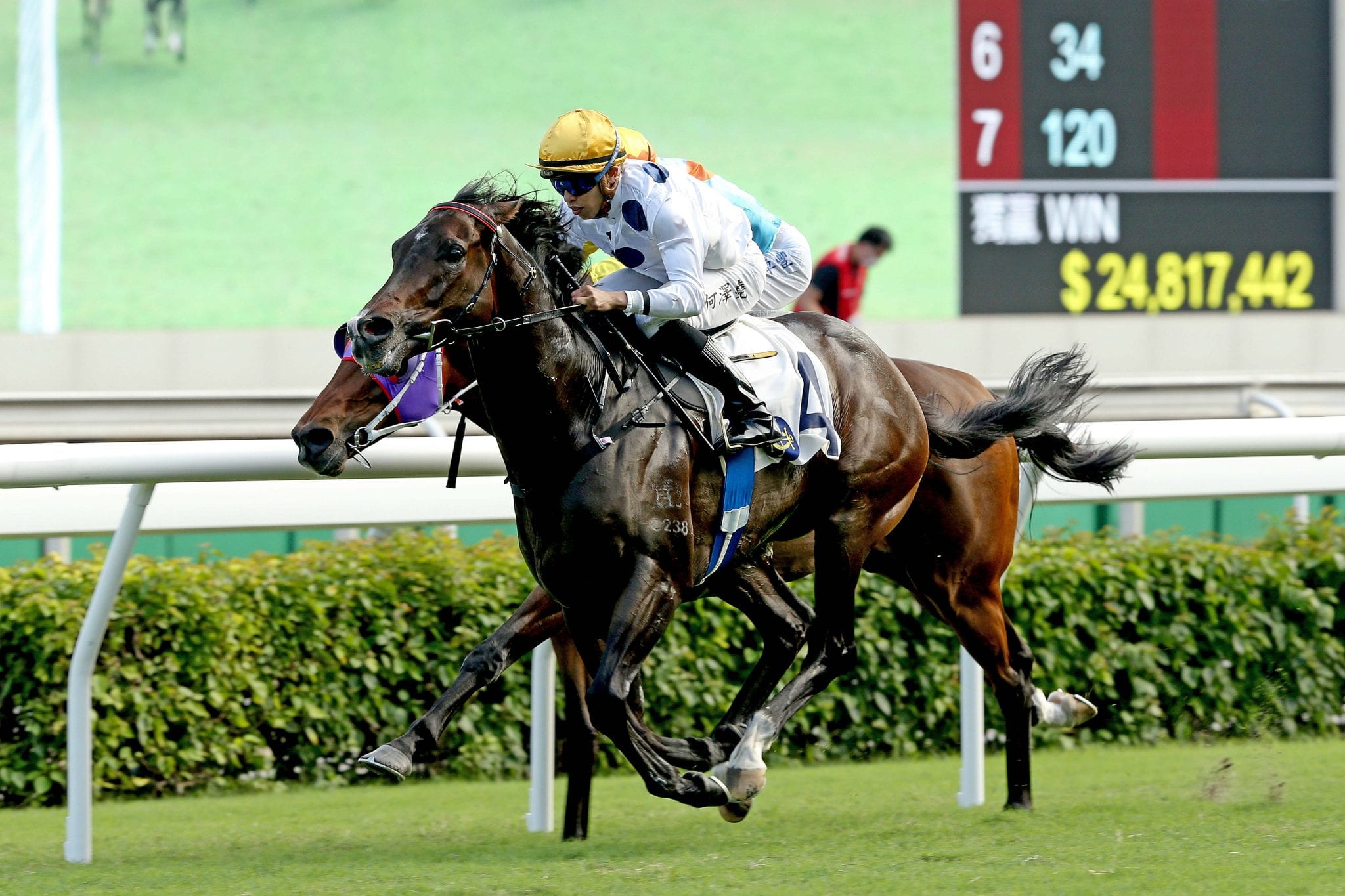 The Francis Lui-trained gelding scored his ninth straight win and his 12th from 13 starts as he comfortably despatched several of Hong Kong’s best performers of recent seasons including dual Horse of the Year Beauty Generation.

Last season’s Four-Year-Old Classic Series champion, under Vincent Ho, quickened from the middle of the pack with a closing 400 metres clocked at 21.81s – his fastest closing 400 metres since a slick 21.65s recorded when he won in Class 2 at this fixture last year – beating Encouraging, the 1400m Sha Tin track record holder.

Adding further merit to his time and performance, the Medaglia d’Oro gelding seemingly switched off once he hit the front as if the job was done, but a few reminders from Vincent Ho followed and he kicked on for a soft half-length win, with Ka Ying Star in second, Southern Legend in third, while Beauty Generation faded to sixth.

“He does switch off, two maybe three strides after he hits the front, he always does – that’s why he never wins by huge margins,” Ho said.

The newly turned five-year-old, who swept aside his four-year-old peers last season, followed his first-up Group 3 Celebration Cup Handicap (1400m) success with another impressive display which confirms he is Hong Kong’s new star.

“He’s come on really well and today he settled a lot more, really well behind the gate and inside the gate, he was so relaxed and with each run his fitness is coming on,” Ho said.

“Before the race I was a bit nervous, but now I’m happy – the horse, his mind and fitness is improving, we’ll keep him at the same distance,” trainer Francis Lui said.

Vincent Ho and Golden Sixty broke evenly to settle midfield, fifth in the run before peeling out at the 300m mark to hit the front, holding on for a half-length score.

“He jumped well, we sat behind the pace and they went really slow, when the other horse accelerated a bit – I just gave him a reminder – he’s a very smart horse.

“He always tends to lay in a little bit – Chad (Schofield) was on my inside and I think once Golden Sixty hit the front he thought the job was done, he sort of put his head up and started looking around and I had to remind him that there was someone coming back on the inside,” Ho said.

Chad Schofield spoke of the willingness of his mount, Ka Ying Star who finished a close-up second: “Good run, he likes to control the race from the front like he did today, he kicked well and to my bloke’s credit he fought hard to the line.”

Karis Teetan, rode third placed Southern Legend, and was pleased with the effort of the dual Singapore Group 1 Kranji Mile victor who is also on a Hong Kong Mile trail.

“If we had a draw he would have been more competitive. I had to face the breeze all-the-way but he still ran very well,” Teetan said.

Frankie Lor’s rising star Winning Dreamer extended his unbeaten record to four with a smart Class 3 victory in the Pai Tau Handicap (1200m) under Vincent Ho, capping a brilliant day in the saddle for the 30-year-old.

“I can’t ask for much more. I’m extremely lucky for the owners and trainers to be supporting me so well and as well, I’m so lucky to be on Golden Sixty and horses like Winning Dreamer – extremely lucky the owners have stuck with me,” Ho said.

The talented son of Deep Field was sent out a 2.3 favourite, against another unbeaten galloper, the John Size-trained Scores Of Fun who finished second, while Chicken Dance grabbed third.

“He can be a sprinter but if he’s behind horses he can switch off completely and when you ask him he can go again – he’s quite fast, he’s a good horse for sure,” Ho said.

“He feels a bit easier than last time, he always tends to hang in but he didn’t do that today – I’m extremely happy with that,” Ho said.

The talented four-year-old arrived in Hong Kong as a 52-rater and has shot up to a figure of 79 since his debut in May, last season.

Karis Teetan secured a treble today capped with victory aboard Will Power in the Class 2 Fo Tan Handicap (1200m, dirt), moving the Mauritian to joint-second on the premiership with Zac Purton, locked on 16 wins behind only Joao Moreira in first with 21 wins.

“Great day, three winners – it’s hard to have one but to have a treble is good,” Teetan said.

The 30-year-old narrowly missed in both of today’s Group 2 contests, finishing second and third, but he ensured he didn’t go home empty handed with three wins of his own, sealed aboard the Douglas Whyte-trained Will Power.

“He’s a lovely horse, since I first sat on him I knew and he’s just improving each time and he’s a better horse this season, mentally and physically,” Teetan said.

“If I put him between horses like that last season he wouldn’t have let down but he’s learning and the good thing you can feel is he is getting better,” Teetan said.

Teetan, earlier, took the first of the two dirt contests, securing the Class 4 Shing Mun River Channel Handicap (1200m) aboard Resolute for trainer Tony Millard and won the opening, the Class 5 Tin Sam Handicap (2000m) aboard the Peter Ho-trained Amazing Agility – a much needed win for the handler who is the last trainer to get off the mark this season.

“Precious moment – it’s very hard to get a winner especially in Hong Kong, you need a good horse and a good jockey that is willing to help you ride the horse,” Ho said.

Hang’s Decision grabbed the Class 4 Siu Lek Yuen Handicap (1400m) for trainer Chris So and jockey Matthew Poon. The win was the first of a double for So who took the Class 4 Sha Tin Wai Handicap (1200m) with Super Red Dragon thanks to an impressive drive by Alexis Badel.

Champion trainer Ricky Yiu got his seventh win as Bulletproof cruised to victory under Vagner Borges in the Class 4 Tai Wai Handicap (1600m).

The second of the two Group 2 contests went the way of Derek Leung and Dennis Yip as Wishful Thinker rallied late to narrowly edge Computer Patch on the line in the Premier Bowl Handicap (1200m).