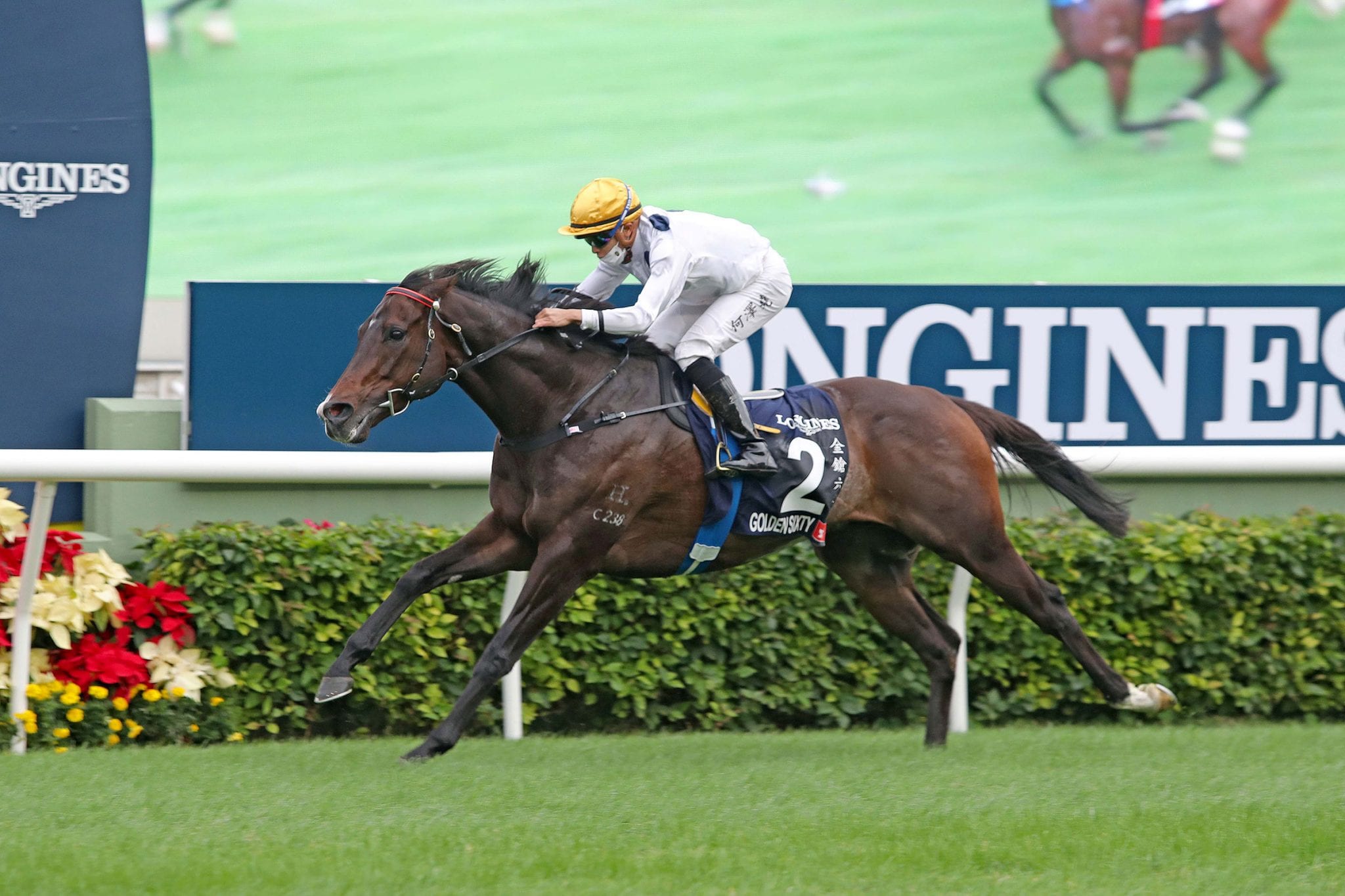 Golden Sixty is within touching distance of status as the world’s premier miler based on the 2020 LONGINES World’s Best Racehorse Rankings (WBRR), released by the International Federation of Horseracing Authorities (IFHA) on Tuesday, 26 January, as nine of Hong Kong’s elite races featured in the World’s Top 100 Group 1 Races last year.

With his recent victory in the Group 1 Stewards’ Cup becoming his 15th win from 16 starts, including 12 victories in a row, Golden Sixty has soared to an international rating of 124 in the year end list – just one point shy of gun British miler Palace Pier and French galloper Persian King – to be the world’s joint-third top miler and equal 10th overall behind Godolphin’s Ghaiyyath (130).

Emphasising the quality of Golden Sixty’s performances, Palace Pier’s credits include Group 1 victories in the St James’s Palace Stakes at Royal Ascot and the Prix Jacques le Marois at Deauville, France, while Persian King also saluted twice in 2020 Group 1 contests – the Prix d’Ispahan at Chantilly, France, and the Prix du Moulin at Longchamp, France. Persian King has since retired.

Underlining his advance under Francis Lui and Vincent Ho, Golden Sixty currently shares second top place with Japanese superstar Almond Eye and British miler Mohaather, who have also both bowed out of racing – leaving only Palace Pier ahead of Golden Sixty among champion milers still in training.

The Hong Kong Jockey Club CEO Winfried Engelbrecht-Bresges said: “With the retirement of one Hong Kong champion in Beauty Generation, it is fitting that we should have a new champion in Golden Sixty to emerge to occupy such a high place in the World’s Best Racehorse Rankings.

“Golden Sixty has been expertly managed by Francis Lui and his team along with Vincent Ho in compiling a winning streak bettered in Hong Kong only by Silent Witness.

“That Hong Kong has produced another champion in Golden Sixty worthy of global acclaim from a horse pool of just 1400 horses in a jurisdiction which has no breeding is a wonderful result.

“We hope Golden Sixty can rise even higher as his career unfolds, while acknowledging the difficulty of improving on his already stunning record.

“Looking further ahead, I’m confident with our significant incentives, coupled with the emergence of our four-year-old crop, there is great cause for optimism about the continued excellence of Hong Kong racing.”

Golden Sixty is one of 17 Hong Kong-trained horses in the 2020 World’s Best Racehorse Rankings, a figure which includes Classique Legend (125) and Shadow Hero (115), who achieved their rankings based on Australian performances before export to Hong Kong.

Five of the 17-strong Hong Kong contingent – including Beauty Generation – have been retired, signalling a changing of the guard in the world’s most competitive racing jurisdiction.

Winner of A$15million The Everest, Classique Legend is the joint highest-rated sprinter in the world along with Australian speedster Bivouac and the highest-rated horse based in Hong Kong with an international mark of 125 – one point higher than Golden Sixty, who notched a 12th straight win at Sha Tin on Sunday in the Group 1 Stewards’ Cup.

Hot King Prawn, winner of the Centenary Sprint Cup on Sunday, shares equal 40th with Exultant on 120, while Beat The Clock (119) comes in at No 57.

Mr Stunning, Southern Legend, Thanks Forever and Waikuku round out Hong Kong’s top-100 contingent at No 80 on 118 points.

Godolphin’s Ghaiyyath is the world’s highest-rated racehorse with a figure of 130 from American galloper Authentic (126).

Nine of Hong Kong’s elite races featured in the world’s top 100 and the number was on par with France.

Each Group 1 is ranked according to an average rating of the first four finishers in that race with the World’s Best Racehorse Rankings Committee deciding the ratings.

The Juddmonte International returned a figure of 125.25.

Mr Engelbrecht-Bresges said: “It is most satisfying that we have maintained a position in the top five in the world for the number of top Group 1 races staged in Hong Kong.

“COVID-19 has presented challenges for all racing jurisdictions and Hong Kong is no exception.

“It is gratifying to that the Club has again risen to the challenge with a ‘can-do’ spirit. We have again attracted world-class horses to Hong Kong for our elite races, especially the LONGINES Hong Kong International Races, with entries from Japan, Ireland, Great Britain and France.

“We take immense satisfaction from the Club’s ability to overcome these significant obstacles to maintain Hong Kong’s strong presence among the world’s top Group 1 races.”