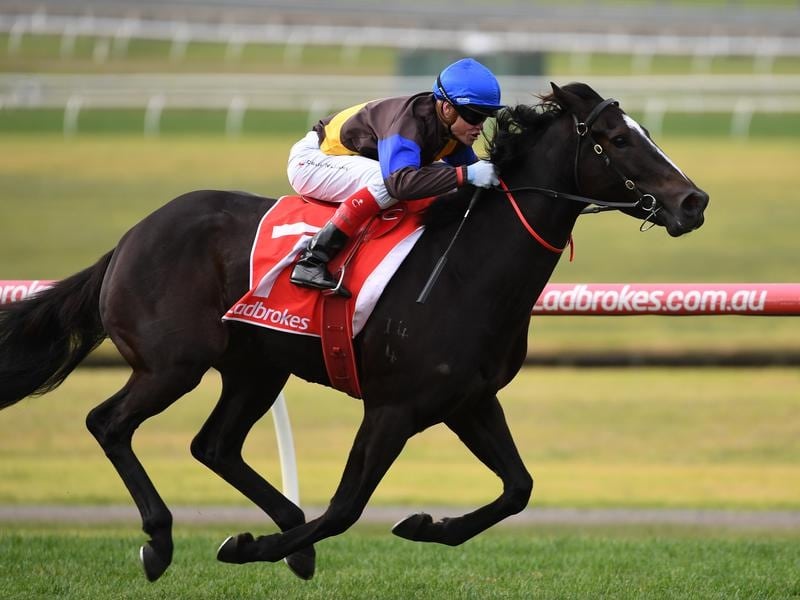 Gold Mag has signalled he is destined for a bright future after backing up an impressive maiden win in the country with a stunning victory in his city debut at Sandown.

With champion jockey Craig Williams aboard, Gold Mag settled midfield in Wednesday’s Le Pine Funerals Handicap (1200m) for three-year-olds before bursting clear in the straight to leave his rivals behind in the final 200m.

The five-length winning margin in the benchmark-64 race bettered the 4-3/4-lengths the Lindsay Park-trained gelding recorded on a heavy track at Bendigo last month.

“He still doesn’t know anything about what he’s doing but he’s got a serious motor and really good raw ability,” Williams said.

“I was very impressed.

“They were very confident and they just said to me ‘ride him like he’s the best horse’, and he clearly was.

“His asset is that he’s got really good acceleration but he could sustain that for 400 metres and he still has no idea what he’s doing.

“So he’s a very exciting horse for the future.”

Gold Mag is now expected to be given a freshen-up and given his chance in the spring by his trainers David and Ben Hayes and Tom Dabernig.

And Rouge-Serret was also impressed by the rising four-year-old’s Sandown showing.

“I know they might be winter horses but he beat them like they were nailed to the fence,” Rouge-Serret said.

“So you’d think he’s got a very, very bright future, doing that in only his second start in a race.

“I haven’t seen one put them away like that for a good while.”

Gold Mag’s victory formed part of a winning treble for Williams who continued his charge towards a seventh Melbourne jockeys’ premiership.

Williams has now ridden 12 city winners at the past three meetings.

He also won aboard lightly-raced Ciaron Maher-trained filly Cataracta in Wednesday’s Graeme Dare Plate (1200m) and the Rebecca Kelly-trained Queen Annabel in the Ladbrokes Multiverse Handicap to extend his premiership lead to 11 over Damian Lane with five meetings remaining.