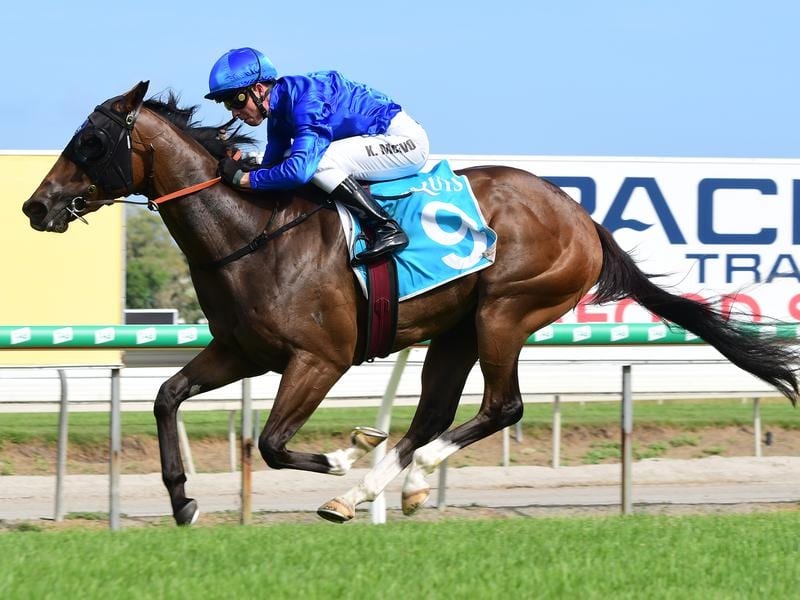 The massive Godolphin operation will have its first runner in the Magic Millions 2YO Classic after filly Exhilarates scored a decisive win in the traditional lead-up to the high-profile race.

Goldolphin had a huge 2018 in Australia including winning the Melbourne Cup with Cross Counter and there seems no reason why it can’t win the first major race of 2019.

Three of the past four winners of the race have gone on to win the $2m 2YO Classic and Exhilarates has her connections confident she can make it four from five.

Exhilarates cost $600,000 and has blue-blood breeding being by super sire Snitzel out of the Group One winner Samaready.

“She has been improving all of the time. That is the best thing about Exhilarates as we didn’t think she would be a summer horse when she first came in,” said Godolphin head trainer James Cummings.

“She is a different filly to the one you saw at Rosehill back in November at her first start.

“We had the blinkers on for the first time today and she really travelled. From the grandstand you could see how well she was going and how she was poised to strike.”

Exhilarates needed to win or run a place to make the 2YO Classic field and fulfilled that goal with ease.

Winning jockey Kerrin McEvoy said Exhilarates looked an ideal type for the Millions now that she could take a handy position.

Lubuk was heavily backed in from $10 early in the week but his second placing was not enough to earn a start in the Classic, leaving trainer Chris Waller’s Queensland manager Paul Shailer to ponder their next move.

“He is a lovely horse and he will be hard to beat in whatever they decide to put him in,” jockey Larry Cassidy said.

Trainer Kelly Schweida isn’t giving up the fight with his horse The Odyssey who carried 4kg more than Exhilarates.

“There is a 2kgs turn around and my bloke got gassed early today. If he draws a good barrier we are in with a chance,” Schweida said.

The Magic Millions 2YO Classic field will be declared on Monday.

Trainer Toby Edmonds hoped Evolo can back up in the $1m Magic Millions Trophy (2200m) after his win over that trip in the Race With Aquis Benchmark 80 Handicap.

Jockey Jeff Lloyd went to the lead on Evolo in the middle stages after being trapped deep and went on to win in a fighting finish.

There are 22 nominations for the Trophy and Evolo’s victory should put him in the frame.

“That should lift him into the field and all being well he can back up,” Edmonds said.