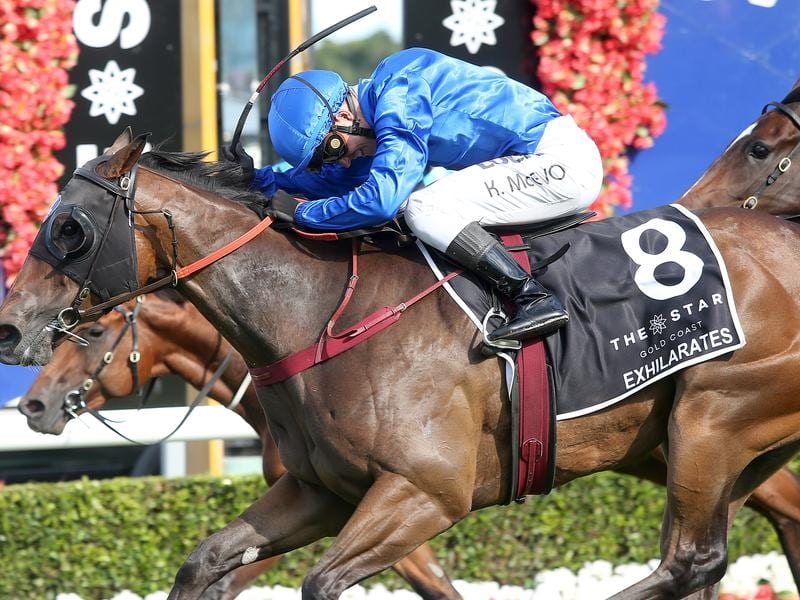 Godolphin could not have picked a better race to open its account at the famous Magic Millions carnival than with Exhilarates who won the $2 million 2YO Classic in outstanding fashion.

Exhilarates ($4) was at the tail of the field in the middle stages but unleashed a powerful burst to beat Dubious ($7.50) by three-quarters of a length with a half neck to the heavily backed Hightail ($5.50).

It was the first win for Godolphin at the Magic Millions carnival after it had three previous runners in other races.

Godolphin for many years has concentrated on home-bred horses but decided two years ago to attack the Australian yearling market.

Among its buys was Exhilarates who lived up to her breeding, being by champion sire Snitzel out of Group One winner Samaready.

Exhilarates became the fourth horse in the past five years to win at the Gold Coast the week before the 2YO Classic.

Godolphin Australia’s head trainer James Cummings admitted when Exhilarates first hit the track it would have been hard to think she would win the Magic Millions.

“This has been a tremendous effort by the whole team,” Cummings said.

“You are seeing a far different horse from the filly who was beaten at Rosehill at her first start.

“But that is the case with many of our young horses as we don’t rush them early in the season and around Christmas they start coming into their own.”

“She got up here early and then had to win last week to get into the field.

“It was important because she got a look at the track and it helped her fitness.”

“I obviously learned a lot from Bart who was a very good two-year-old trainer as well as everything else,” Cummings said.

“But I have also learned from watching my father Anthony, Gai Waterhouse and Peter Snowden.”

Cummings said Godolphin had spent up at the Magic Millions sales on the right horses.

“We indicated we would be joining the market and we have signalled our arrival,” he said.

Cummings will now have to decide whether to press on to the Golden Slipper with Exhilarates but won’t make an immediate decision.

Winning jockey Kerrin McEvoy said Exhilarates was an exciting filly who had a tremendous turn of foot.

“Once I got a run through in the straight I knew she would be hard to beat,” he said.

It completes a great 12 months for McEvoy who has also won the Melbourne Cup (Cross Counter) and The Everest (Redzel).

Michael Walker, who rode Dubious, said the youngster had “run out of his skin”.

“I still think he is a Group One winner in the making,” he said.