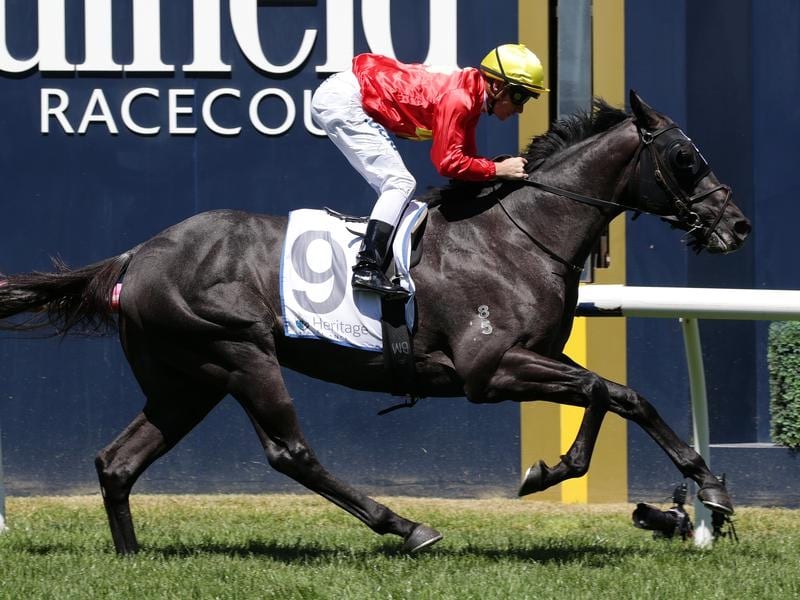 Global Exchange has stamped his Australian Derby credentials with a narrow, but impressive win in the Group Two Alister Clark Stakes at The Valley.

The Ciaron Maher and David Eustace-trained Global Exchange is favourite for the Group One Australian Derby (2400m) at Randwick on April 6 which will be his next start after he got the better of Declarationofheart and Cossetot in Friday night’s 2040m race.

Ridden by Ben Melham, Global Exchange ($2.50 fav) made his run on the outside coming to the home turn and was able to edge past Declarationofheart to score by half-head.

Cossetot was the same margin away third.

Global Exchange has now won the Group Two Autumn Classic (1800m) and Alister Clark (2040m) at his past two starts.

Melham said The Valley was not the ideal course for big-striding Global Exchange, but the colt was able to get the job done and Melham believes he has the right attributes heading towards a Derby.

“He’s got a lovely temperament. He relaxes really well and he’s got a good turn of foot to go with it. So he’s got all the right attributes.”

Eustace said Global Exchange was now primed for the Derby.

“The Derby has been the plan the whole way through, really since the spring when we put him away,” he said.

“There looks a lot of upside to him, the further we get.”

Global Exchange is at $5 for the Australian Derby with Declarationofheart also Derby-bound and he shares the second line of betting at $8 alongside Victoria Derby winner Extra Brut.

Declarationofheart’s jockey Damien Oliver was outed for a careless shift at the 700m-mark with his ban to start after next week’s Golden Slipper meeting and end in time for the Derby.