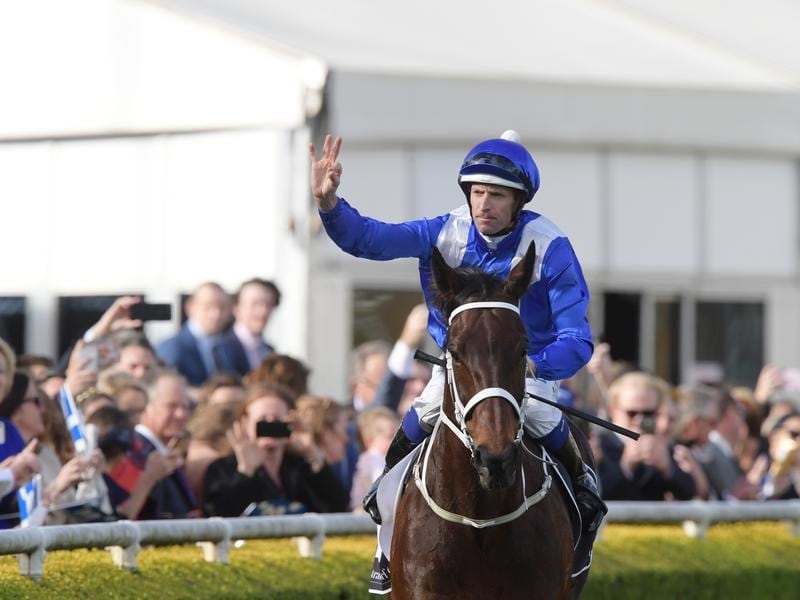 Sydney racegoers are likely to get just one more chance to see Winx this spring with the champion slated to have her next start in the George Main Stakes.

Her trainer Chris Waller says he is happy to give her a four-week space between Saturday’s record-breaking triumph in Saturday’s Group One Winx Stakes (1400m) and her tilt at a third George Main on September 15.

Waller said Winx had come through her race as well as ever and he was relieved she had won as well as she did when she beat outsider Invictus Prince by two lengths easing down after a few anxious moments mid-race.

“It was her first race since the Queen Elizabeth in April and we’ve been planning her return since then,” Waller said.

“You always think they’ve come back well and it’s a relief when they do.

“She is an uncomplicated horse but there were a couple of moments in the race when I wondered.

“She will go to the Colgate Optic White George Main next. The mile (1600m) will suit and we don’t need to be over-racing her.”

After the George Main, Winx is likely to head to Melbourne for the Turnbull Stakes (2000m), three weeks before her bid for an unprecedented fourth Cox Plate.

Her win in the race named in her honour gave her 26 consecutive victories to surpass the unbeaten Black Caviar who was retired after 25.

Winx and second favourite Kementari made their runs together at the 600m mark and for a couple of seconds it seemed the match-race might be on.

But Winx stepped into another gear, leaving Kementari flat-footed, and she launched herself to the winning post to score what was in the end, a soft win.

Her jockey Hugh Bowman admitted there was a moment for concern but as usual, she did what she does best.

“She does what other horses can’t do.” Bowman told Sky Thoroughbred Central.

“No matter where she is in the race, when she sees other horses she attacks like no other.

“Glyn (Schofield) on Kementari and I bumped slightly as we were coming out wide but once she balanced up, she just went for the line.

“I’m so proud of her and what she does for racing.”