Gem On Song For Doomben Cup 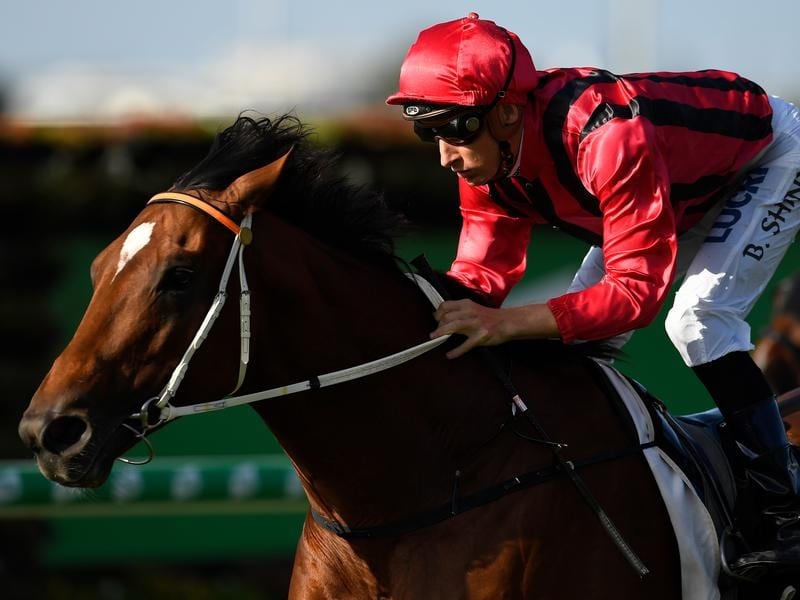 Newcastle colt Gem Song will have a slight modification of riding tactics as he attempts to become third three-year-old to win the weight-for-age Doomben Cup.

Lees will have three Cup starters – Gem Song, Big Duke and Sixties Groove who has gained a start as first emergency with the scratching of stablemate Hallelujah Boy who has a hoof injury.

Danewin (1995) and Akhenaton (2004) are the only three-year-olds to win the Cup but most of the top horses in the age group take the route to the Derby and Oaks through the Rough Habit Plate and The Roses.

“I still feel he is the pick of our three runners,” Lees said.

“Gem Song has continued to do well at the Gold Coast, and certainly hasn’t gone backwards.”

The Gooree Stud-owned Gem Song opened his winter carnival in brilliant fashion with victory in the Group Three Gunsynd Stakes at Eagle Farm three weeks ago.

Lees elected to stick at 1600m for Gem Song’s next start when he ran third to Doomben Cup rival Archedemus in the Members Quality at Doomben.

After sitting behind the pace on the fence Gem Song fought on to finish third.

Lees’s Queensland manager Mel Eggleston has been overseeing the team including Gem Song at the trainer’s Gold Coast stable.

“He had a good barrier at Doomben and he was ridden forward because they weren’t running on,” he said.

“But we felt he might have been exposed a touch early and when he won the Gunsynd he came from further back.”

Eggleston said from barrier eight Gem Song May be able to get into a good spot with cover and then run on.

Blake Shinn, who won the Gunsynd on Gem Song, is reunited with the colt on Saturday, replacing Ron Stewart.

Big Duke has been freshened since he was unplaced in the Sydney Cup (3200m) which came after his second to Avilius in the Group One Tancred (2400m).

“Big Duke is suited here and a softish track will help him,” Eggleston said.

It has been rare this season for Godolphin not to have one of the favourites in a One Group race but head trainer James Cummings has warned not to underrate outsider Tally.

Cummings said Tally probably needed to improve under the weight-for-age conditions at 2000m, but he had shown in the past that he could produce a special run.

“He’s warming into his preparation and there are some suitable staying targets over the next few weeks in which he can be competitive,” Cummings said.

“He’s a solid middle-distance horse and he tends to step up at some stage in every preparation.”

Godolphin will have several favoured horses at Doomben with Plague Stone in the three-year-old handicap and Isaurian in the Chief De Beers Handicap.

Cummings is also hoping Epidemic will prove a chance in the Listed Bright Shadow Quality.

“We’re looking for her to recapture the form she was in 12 months ago.”

“I like the way she’s galloping in her preliminaries this campaign.

“She’s muscling up like she’s ready to offer something.”